The Skibbereen U13 squad that defeated Clonakilty AFC in U13 Premier League Group 1 at Ballyvackey.

The opening match of the new 2021 WCSSL season pitted two attack-minded sides against one another at an overcast Clonakilty venue. Skibbereen enjoyed the brighter start and used the full width of the pitch to stretch Clon’s defence.

Once they settled, Clonakilty quickly assumed control and launched a succession of counter-attacks. James Maguire, James Costello and Michael Francis Collins were at the hub of Clon’s best moments early on and the Ballyvackey outfit opened the scoring after six minutes.

Travis O’Sullivan latched on to a perfectly-weighted pass and raced clear only to be brought down inside the penalty area. James Maguire made no mistake by arrowing the resulting spot-kick into the top corner.

Credit to Skibbereen who swiftly played their way back into contention. Dan McCarthy and Niall O’Callaghan proved a steadying influence as the Baltimore Road club embarked on a devastating 15-minute spell.

Alex O’Donovan thundered home a leveller and the visitors continued to press, forcing Clonakilty to concede two penalties in quick succession. Joe McCarthy converted the first to make it 2-1 on the quarter-hour. Shane Hallihane did likewise with his own spot-kick shortly after. Then, the same player extended Skibbereen’s advantage following a mazy dribble and close-range finish. 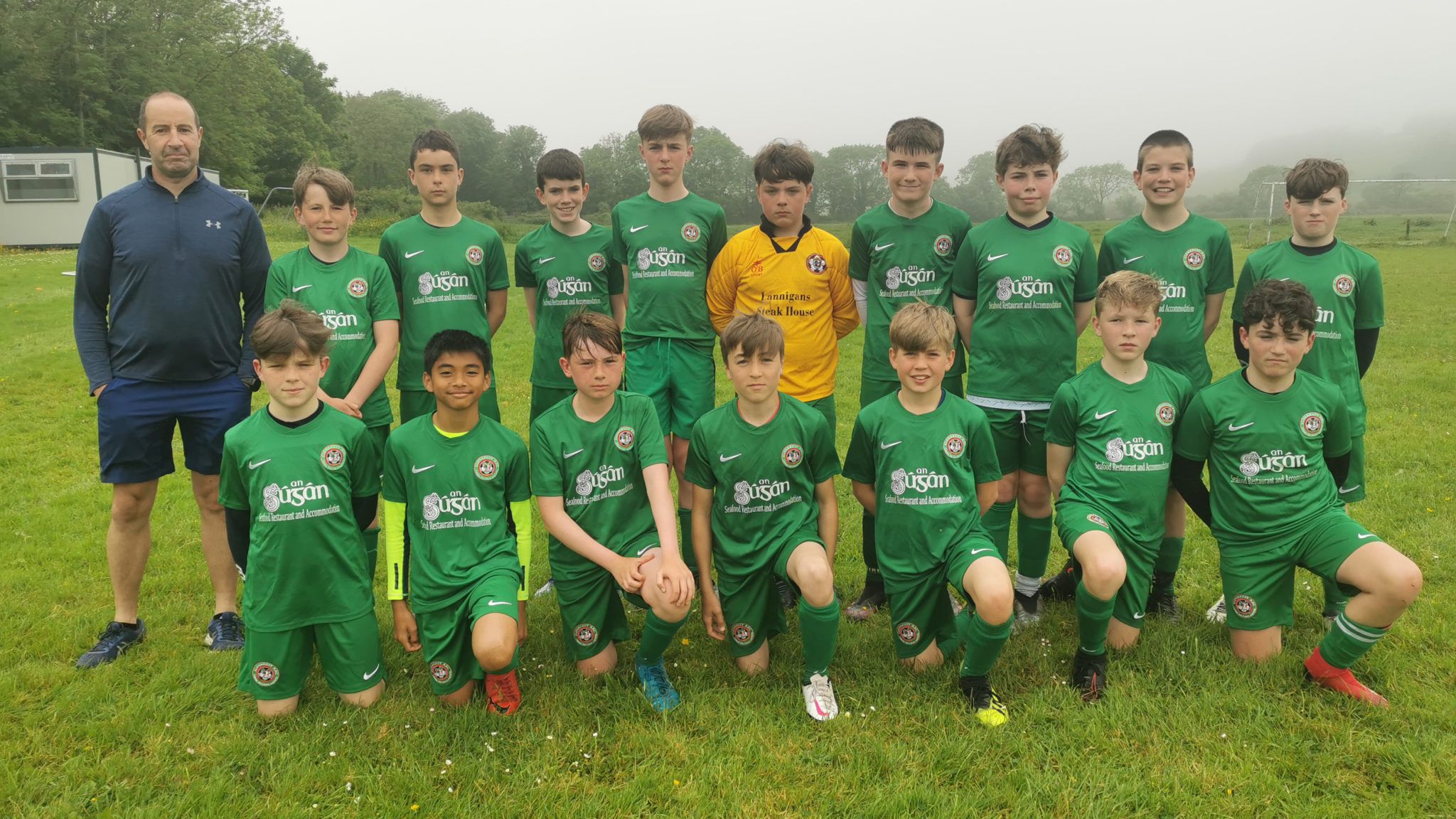 The Clonakilty AFC squad that lost at home ot Skibbereen in the U13 Premier League.

Hallihane had a fine outing and completed his hat-trick just before the interval. Prior to that, Clonakilty enjoyed a decent spell with James Maguire, Mattie Lyons and James Costello testing goalkeeper Oran O’Donovan. Skibbereen withstood that difficult spell and made it 6-1 when Jack Dolan curled home a beautiful strike on the stroke of half-time.

Upping the tempo at the start of the second period, a reenergised Clonakilty reduced the deficit courtesy of a marvellous chipped effort from James Maguire.

The home team grew in confidence and Louis Kelleher’s save and quick delivery saw Clonakilty score for a third time after 40 minutes. James Maguire collected the ball, ran from the halfway line and rounded Oran O’Donovan before tapping into an empty net to make it 6-3.

That ninth goal of a thoroughly enjoyable contest preceded an entertaining finale in which both teams raced forward at the earliest opportunity. Louis Kelleher denied Joe McCarthy a certain goal courtesy of a world-class save while Oran O’Donovan proved equally resilient at the opposite end.

Clonakilty were rewarded for a much-improved second half showing when Peter O’Mahony headed home a corner with four minutes remaining. It proved academic as Skibbereen saw out the closing minutes to deservedly take all three points at the end of a cracking game to kick off the new season.