The four pitches in Ahamilla were a hive of football activity on Thursday last when the Dr Herlihy Cup competition was run off for the first years in the four biggest secondary schools in West Cork.

The competition was divided into three sections, Cup, Shield and Plate.

The smaller schools took part in the Shield competition, on a blitz basis, the previous Thursday in Dunmanway, while the Cup and Shield took place on Thursday last in Clonakilty.

While the A teams played in the Cup competition, the B teams of the same schools took part in the Plate.

Reigning champions, Bantry, got their campaign off to a winning start when they accounted for the hosts, Clonakilty on a score of 2-4 to 0-4. Killian Hurley, Darragh O’Shea, Fachtna O’Connell, Adam Gilman-Burke, Oisín Murphy, Dan Joe O’Neill and Thomas O’Donoghue were the stand-out figures for the winners.

In Round 3, Clonakilty recorded their first win when beating Hamilton High by 4-4 to 1-2.

Holders Bantry and Skibbereen met in the final for the Herlihy Cup and served up a real thriller. Playing against the breeze, it was Bantry who looked the sharper side in the first half, guided by manager Alan O’Sullivan.

An early goal by Oisín Murphy, set them on their way before Daniel McCarthy replied for Skibb with a pointed free. Murphy raised a white flag for the light blues before nippy full forward Dan O’Neill, son of the legendary Damien, billowed the Skibb net again.

Skibb looked in serious trouble until Cathal Daly raised a green flag and McCarthy added a point to close the gap to two at half time, 2-1 to 1-2.

With the breeze, Bantry kicked the first three points of the second half, through Colm French and O’Neill to lead by double scores, 2-4 to 1-2.

They seemed well on the way to retaining their title but Skibb had other ideas and when Daniel McCarthy kicked a breakaway goal the recovery was underway. A Murphy free stretched the lead to three again but the game finished in a welter of excitement when sub, Jason Collins, finished a rebound to the Bantry net, the sides were level for the first time in the game, 2-5 to 3-2.

Man-of-the-match Daniel McCarthy became the Skibbereen hero when he kicked a point in the last minute to put his side in front for the first time in the game but it took a fine save from goalkeeper, Adam Limrick, to deprive Bantry of a winning goal in the last attack of the game. Final score was 3-3 to 2-5.

This win, Skibbereen’s first in the Dr. Herlihy Cup, completed a great week for the school as their senior footballers had won the county A football Simcox Cup the previous Friday.

Hamilton High School were the holders of the Plate and they got off to a winning start with a good win over Skibbereen by 3-4 to 0-7. George O’Mahony, Cathal O’Connor, Conor Kelly, Seán Gallwey, Niall Egan and Joe Hayes impressed for the winners. 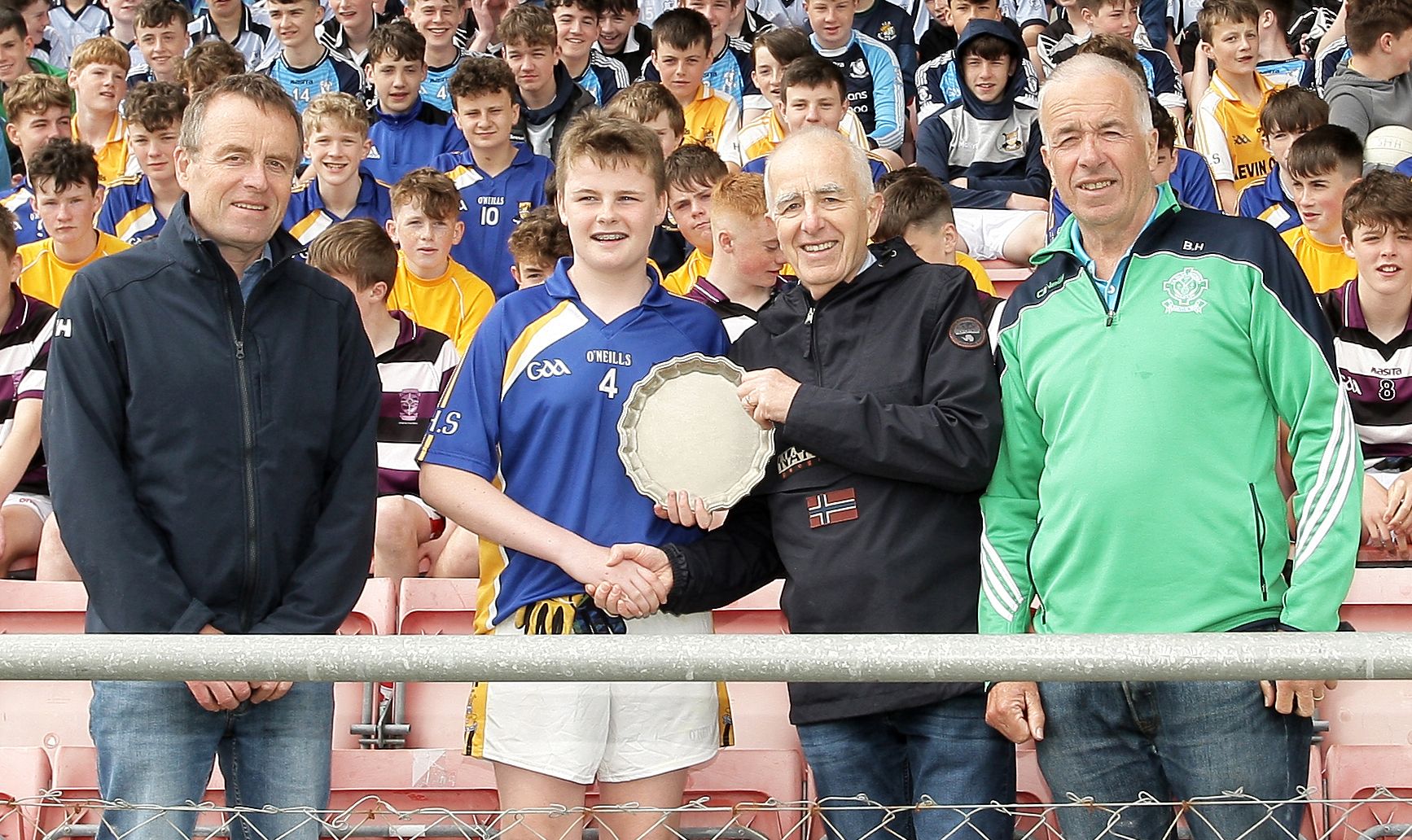 The Herlihy brothers Barry, Michael and Brian presents the Plate to George O'Mahony captain of the Hamilton High School team that defeated Coláiste Pobail Bheanntraí in the Dr Michael Herlihy Cup B final at Clonakilty on Thursday. (Photo: Paddy Feen).

In Round 2 Hamilton High and Clonakilty fought out a great battle before the Bandon lads emerged winners by a single point, 3-2 to 2-4. Skibbereen kicked eight goals when beating Bantry by 8-1 to 2-2. Best for Skibb were Michael Hurley, Dylan Moloney, Jack Dolan and Danny O’Sullivan.

Round 3 saw Clonakilty beating Skibbereen by 4-4 to 1-2 and when Hamilton High, managed by Daniel Roche, overcame Bantry by 7-2 to 1-3, they had an unbeaten record, retaining the Herlihy Shield for another year. George O’Mahony, Tom Horgan and Odhran Coughlan did most of the scoring for the winners, while Isaac Horgan, Sam Kuzera, Caleb O’Brien, Conor Collins, Davin Ross and Shay O’Mahony tried hard for Bantry. 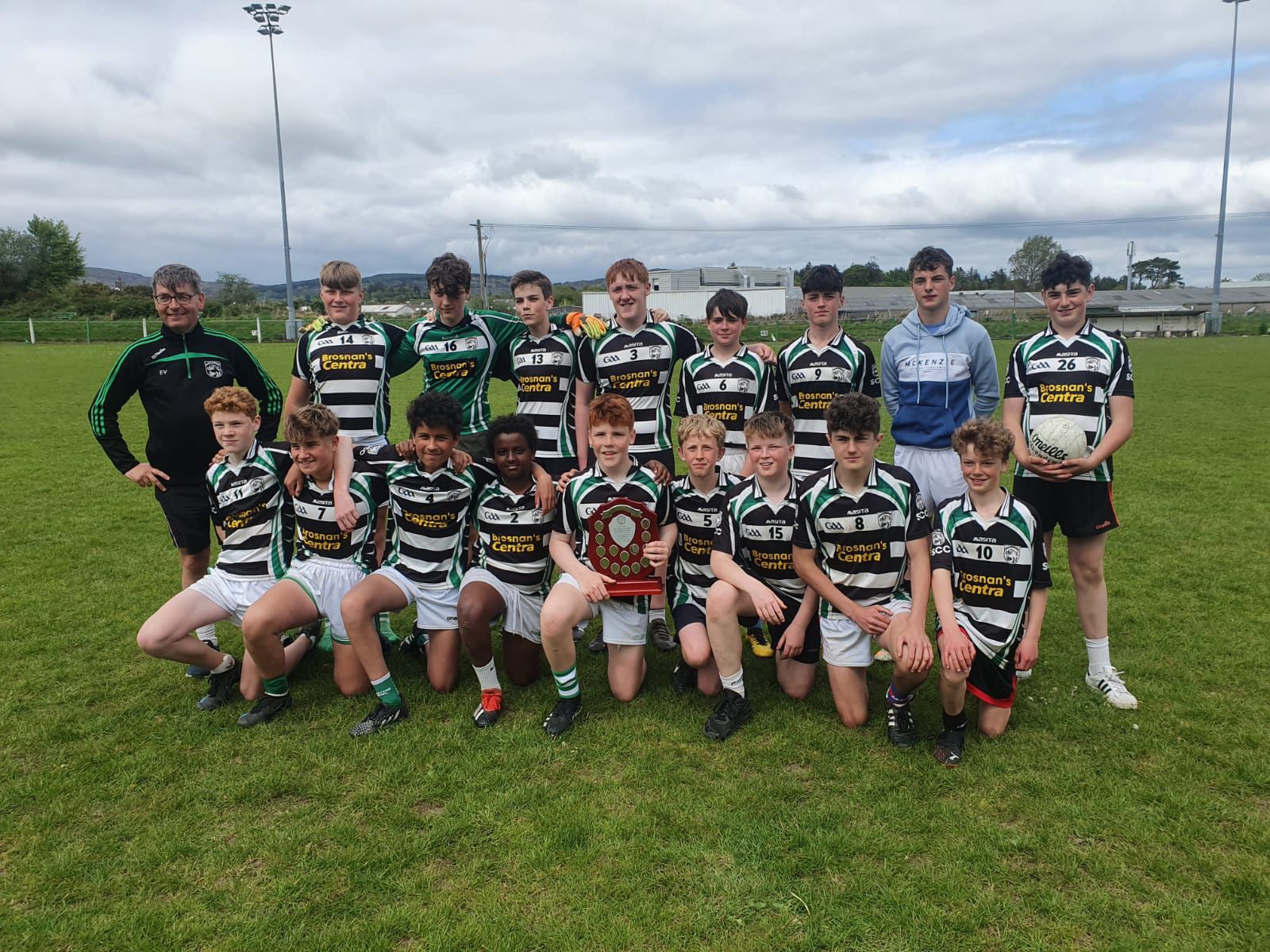