Bandon AC's Phil Healy on her way to winning the women's 200m ahead of Rhasidat Adeleke of Tallaght AC, who finished second, at the 2021 Irish Life Health National Senior Championships at Morton Stadium in Santry, Dublin. (Photo: Sam Barnes/Sportsfile)

Earlier this month Adeleke broke Healy’s national women’s 200m record when she ran a blistering 22.85 and the new kid on the block hit the headlines with her 100m and 200m gold double at the European Athletics U20 Championships last summer.

When Healy and Adeleke squared off in the women’s 200m final at the national outdoor championship last June, the Bandon AC sprint queen won a race for the ages by one hundredth of a second.

While Adeleke, in college at Texas University, will not be in action at the national senior indoor championships this Saturday and Sunday, Healy (27) knows she needs to keep improving to stay ahead of her 19-year-old rival.

‘I remember years previously the likes of Amy Foster was dominating the 60 and I was the young one coming through whereas now I am on the older side of things and Rhasidat is coming through,’ Healy told The Star Sport Podcast.

‘There is talent across all the events in Irish athletics right now, with the younger athletes coming through, that’s what you want to see. It’s healthy competition. Someone is always going to take your place, and that’s across all sports, but it’s great to see Irish athletics moving in the right direction.

‘Rhasidat has had a phenomenal year so far, she took my 200m record indoors and she broke it outright as well because it was faster than the outdoor record. Irish athletics is going to new levels and it shows that everyone has to up their game.’

Healy will be in action in the women’s 400m this weekend at the Sport Ireland National Indoor Arena where she looks to add to her incredible haul of 14 senior gold medals at national championships, between indoor and outdoor. Adeleke won’t be in opposition but the West Cork woman will face competition from Sophie Becker (Wexford) and Roisin Harrison (Limerick) so she knows she needs to be in top form. The good news is that Healy has run three sub-52-second 400m in recent weeks, including setting a new PB of  51.74. She is also closing in on Karen Shinkins’ Irish indoor 400m record of 51.58 that has stood since February 2002. 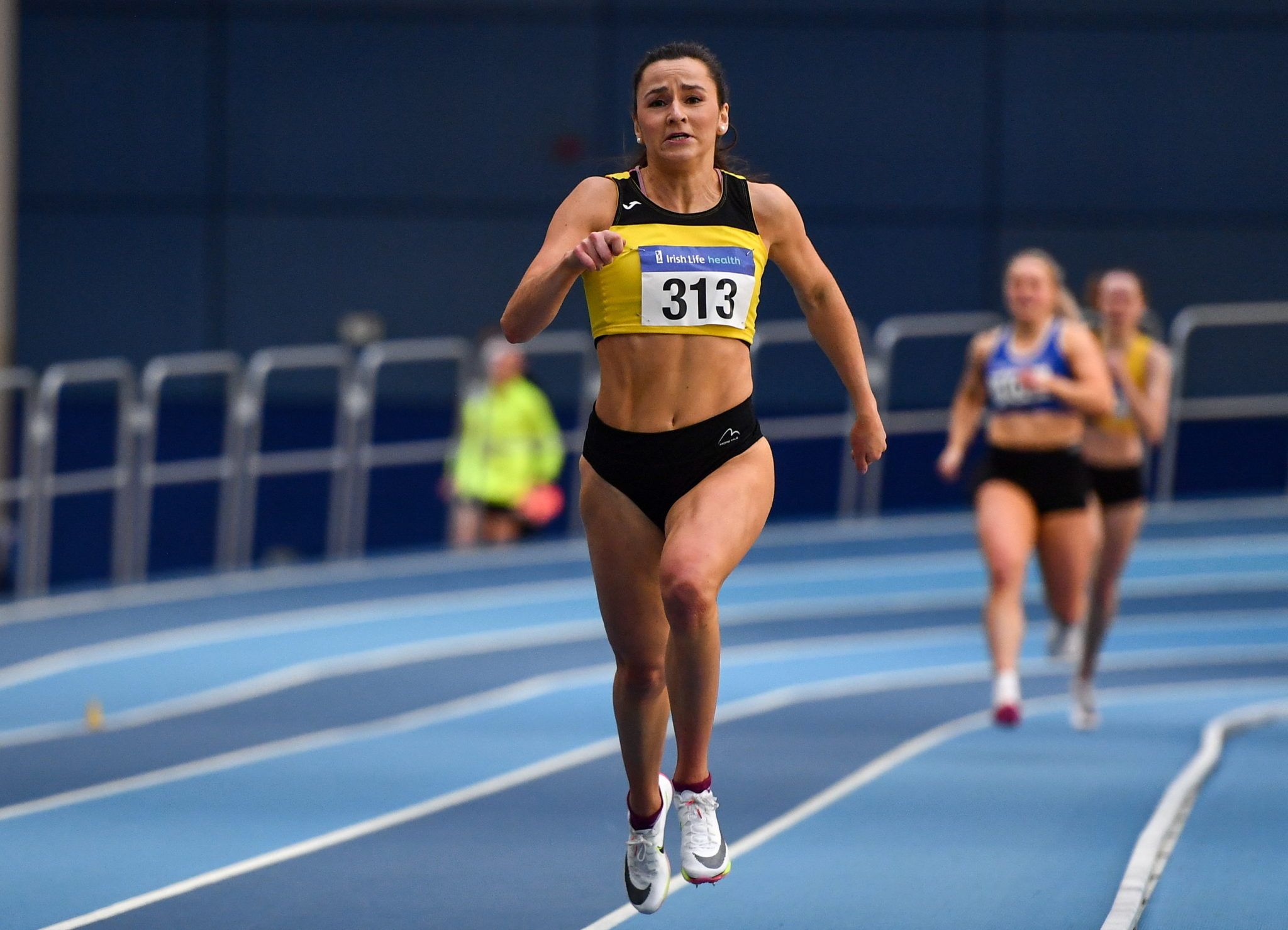 ‘Records are there to be broken, and I am very, very close to that record,’ Healy said.

‘Just over one tenth of a second is nothing over 400 metres. If I do break it, that’s an absolute bonus. That’s a record that has stood for 20 years. It will show that 400-metre running in Ireland is certainly breaking new barriers, but that record could then be broken by Rhasidat a couple of weeks later again. It shows that barriers are being broken.’

But Healy also explains when it comes to championships, it’s the results that count.

‘I could go to the World Indoor Championships next month, run 52 seconds and get through the rounds – and that’s more important than the times when it comes to a major championship,’ she said.

‘Everyone wants to run quick and have these records, but it’s all about being in the right race and executing the race. If you do both then the times will come. You saw last year when I was in the final at the European Indoors, I was in the right race and we went through the 200-metre split really quick and I did run a PB as well, so the race can get the best performance out of you.’