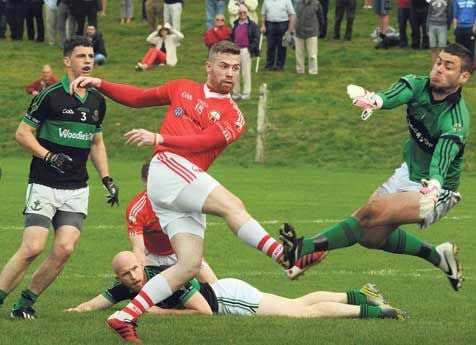 O’DONOVAN Rossa’s opposition, Bishopstown, in the first round of the county senior football championship this bank holiday Monday in Clonakilty, at 3.30pm, are one of the main contenders for the top prize this season, says Skibbereen’s Daniel Hazel.

Last year, Skibbereen recovered from a surprise defeat to Clyda Rovers to overcome Aghada and Douglas before succumbing to Nemo Rangers in the fourth round whilst Bishopstown accounted for Ilen Rovers, St Finbarr’s and Clyda ahead of a disappointing semi-final loss to Carbery Rangers.

Much is expected of two talented sides in the upcoming championship with Rossa’s Hazel acknowledging the threat posed by a Bishopstown team that possesses plenty of inter-county experience.

‘If you are talking about primary contenders for the Cork senior championship at the start of the year then you have to include Bishopstown,’ Hazel said.

‘They are a very strong, physical team with a lot of great players represented on the Cork inter-county panel like Conor Dorman, Ken O’Halloran and Jamie O’Sullivan. Semi-finalists for the last two years, they (Bishopstown) have fine-tuned a game-plan played at a quick pace and we will take them at their merits and not underestimate them one bit.’

In the Kelleher Shield Rossa have four wins from seven games and lie joint second at the moment, alongside Castlehaven and Nemo Rangers on eight points, but both those clubs have a game in hand.

A winning run of three on the bounce – against Douglas, Ilen and Castlehaven – was halted recently by a one-point loss to Clonakilty, 0-13 to 1-9.

Meanwhile, consistent performances in the O’Donovan Rossa jersey earned Hazel a call-up to Cork’s McGrath Cup squad at the beginning of the year and the former Sigerson Cup winner is hoping for an injury-free run to remain in Brian Cuthbert’s thoughts.

‘I was absolutely delighted to get the call from Brian (Cuthbert) just before Christmas and get the chance to become involved with the Cork senior set-up,’ Hazel said.

‘I hope they saw enough of me in the McGrath Cup to understand what I was capable of. It was a fantastic experience and I’m grateful for the opportunity.

‘A small Achilles issue has hampered me over the past number of weeks but I am working hard to overcome it in time for the Bishopstown game.

‘I’ve been involved in a few of our recent league matches. I’m building it up to be fit and ready for the first round of the championship.’

Meanwhile, Bishopstown’s Eoin Byrne is looking forward to his side’s clash with their West Cork opponents whilst acknowledging the difficulties for the city club when it comes to their football and hurling commitments at this time of the year.

‘Things are coming together quite well for us but it is tough being a dual club because you are trying to balance the hurling and football plus playing games most weekend’s in the run up to the first round,’ Byrne commented.

‘For me personally, I don’t even think about the fact you have a second chance when it comes to first round games because there is a danger you could end up playing a really good team in the second round and end up in a relegation dogfight if you mentally switch off. Our only focus is putting everything into winning the game.

‘O’Donovan Rossa are a very good team and really impressed me when we played them in the league last year. They have talented forwards like Donal Óg Hodnett and Thomas Hegarty who I’d know from CIT, but we are backing ourselves to come out on top of what should be a really close game.’

O’Donovan Rossa: Both Conor McCarthy and Ger Minihane are not available for Monday’s game due to work commitments, while Pat Gilmore and Eoin Hodnett are sidelined through injury. Daniel Hazel, who was in with the Cork senior footballers, is on the way back from injury too and has missed a lot of recent games. Alan Tanner has returned to action this year, which is a big plus, while wing back Sean Fitzgerald, who played with the Rossa U16s last season, is one to keep an eye out for after a number of eye-catching performances. Dylan Hourihane is another from that U16 team to feature for the seniors in the Kelleher Shield this season.