ALTHOUGH the West Cork Rally was one of the main reasons why Rosscarbery’s John Hodnett took up rallying, Easter weekend trips to Millstreet, other parts of north Cork and Killarney to watch the Circuit of Ireland had already whetted his appetite.

Those Easter pilgrimages saw fans flock to see the very best in the sport, including Billy Coleman who had adoring fans throughout and outside Ireland.

‘Billy was the main man, for sure,’ commented John, who began rallying in 1979 in a distinctive purple Mk. 1 Ford Escort that was purchased from Skibbereen’s Phil O’Sullivan. A very enjoyable era ended less than a decade later due to the presence of some extra paperwork.

John’s first event was a forest rally in Watergrasshill at the end of 1979. No different now as then, once Christmas was over the West Cork Rally became the focus of attention. Although the first West Cork Rally in 1977 had less than a handful of local drivers, it created a rapid upward spiral. Within a few years it wasn’t unusual to have close to or even over 20 locals involved. At the time, most were from Clonakilty and, to quote a local expression, west along.

‘The build-up to the event was huge as there were so many from West Cork competing,’ John recalls. ‘There was great banter and, of course, some of us stoked it up more than others, but it was fun. Here (in West Cork), the late and great Mick Campbell from Clonakilty was the centrepiece, he was the man we all looked up to, even before rallying. He was a marvel on two wheels and was an expert scrambler.

‘Mick was so passionate about rallying. It was great just to be in his company. He was an encyclopaedia, his knowledge of cars was something else and he guided a lot of us, to be truthful. He was a legend.’

West Cork Rally weekend was always special as competitors, especially the local contingent, headed to Clonakilty for pre-event scrutiny. The sound of the cars echoing as they passed through local villages where children and adults waved enthusiastically. There was a great buzz.

‘We finished well down, we had a problem on the Sunday evening,’ he says.

On that occasion, he was navigated by Tim Collins, a local electrician. Seeded at 145, they finished 65th. But it wasn’t about the results, it, was about competing. The following year, and with another Rosscarbery navigator, Dermot Shanahan, a 50th place finish followed a starting seeding of 145.

‘I held on to the Escort for about two years and did events around the place including an event called The Inn Between Rally in Beaufort. I also did a few more forest rallies and single stage events. The forest events were a great learning curve, and I have fond memories of the rallysprint in Castlefreke Wood.’ 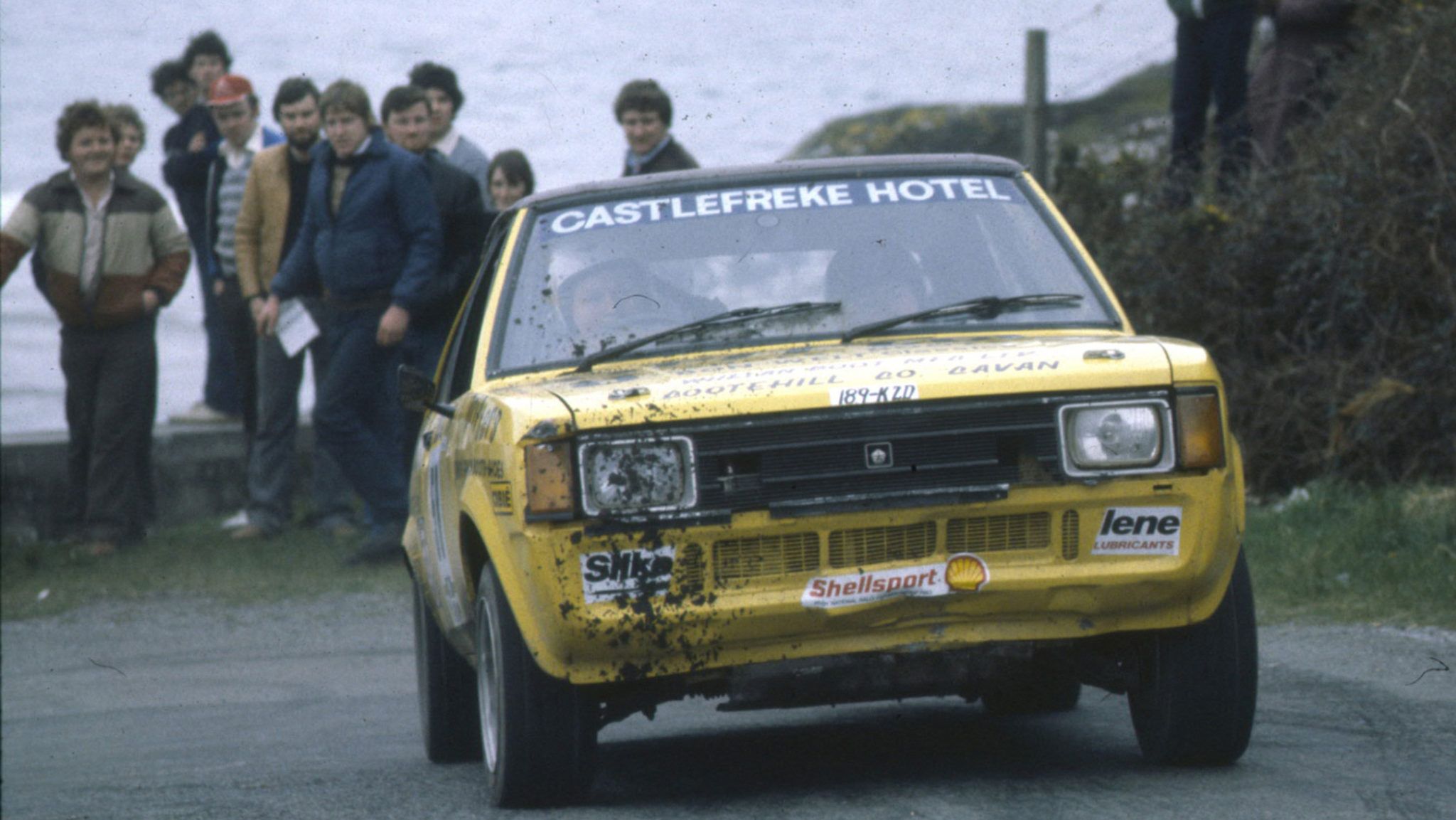 John Hodnett/Mick Barnett (Talbot Sunbeam) in action in the 1983 West Cork Rally on the stage at Tragumna.
(Photo courtesy of rallyretro.com)

Schull’s Martin Attridge also sat alongside John on some single-stage events. The Escort was replaced by a two-litre Sunbeam and, because of his later auctioneering acumen, the time and point of purchase was recalled by John with relative ease.

‘I bought it late at night on the West Pier in Dún Laoghaire. I heard about the car through Mick Barnett, my navigator, whose cousin (Frank Barnett) had a garage business in Dún Laoghaire,’ John explains.

‘Mick had a Renault 5 Gordini at the time and, in the circumstances, it wasn’t really practical. Mick was selling the Gordini to his cousin, we drove up, I bought the rally car and we drove it home the next day.’

On the 1982 West Cork and starting at No. 90, a best-ever finish saw the Hodnett/Barnett partnership end up in 26th, the top West Cork crew. Those years, and for some time longer, pacenotes were not allowed in Irish rallying. In fact, it was illegal to use or carry them. While a non-finish followed on the 1983 West Cork, a similar result in ’84 brought prolonged laughter from Hodnett. Once it stopped he added, ‘Bob Kelly (who also hailed from Rosscarbery) partnered me on the rally where I made my exit.’

John’s explanation continued to be peppered with laughter.

‘The late Frank Meagher was seeded in front of me. I had him caught coming into Milltown,’ he says. ‘We were doing fine, coming out of Drinagh third gear went and down over Corran we got a puncture. The late Jim Maxwell helped us change the wheel. We finished the stage, pulled in at the stop car close to John Shanahan’s Garage in Leap and sure you know the story…’

Preferring to hear it from himself, John, still laughing, was encouraged to explain.

‘I was working for the AI at the time and I knew the roads like the back of my hand. I knew every gate and gap,’ he says.

‘The officials took some paper (pacenotes) from Bob. I never knew he had them! Sure what did I need them for, I knew where I was going, I couldn’t follow a pacenote!

‘We were excluded, I drove the car home and parked it up and that was that. A few weeks later we were summoned to a meeting at the RIAC headquarters in Dawson Street in Dublin and we were suspended.

Reflecting on his time in the sport, John added: ‘Rallying brought, and indeed continues to bring, serious revenue into West Cork. A lot of people would have no local rallying were it not for the people in Clonakilty that put their shoulder to the wheel in the 1970s. They had the initiative. You felt privileged to take part in the rally and it deserves all the accolades it gets.

‘Considering the machinery we had we got some very good placings in the West Cork. I have always said that rallying was the one sport where there was no bitterness, no needling compared to some other sports.  You would be delighted if you brought home a trophy and while it was recognition of your achievement, at the end of the day they were nothing more than great dust collectors. The bragging rights were more important and, again, that was all in good fun.’