Sharon Whelton from Clonakilty and her fiancé Mike Roberts from Limerick have loved every moment of their Canadian adventure since they moved there in 2012.

Sharon Whelton (30) left Clonakilty for Canada in 2012. She hasn’t looked back since. KIERAN McCARTHY caught up with the West Cork woman who’s flying the GAA flag abroad

KIERAN McCARTHY (KMC): Take us back to 2012 when you left Clonakilty and West Cork to make the big move to Canada.

SHARON WHELTON (SW): At the time, job prospects back home were fairly grim. My boyfriend at the time (and now-fiancé) Mike (Roberts, from Castletroy in Limerick) and I had briefly discussed the possibility of a move to Canada earlier in the year, but we had hoped that things would work out at home. However, our options weren’t the best so we decided to apply for a one-year working visa as a back-up. Things didn’t really progress jobs-wise throughout the summer – we graduated from UL in August 2012 and Mike moved to Calgary in mid-September. My plan was to follow suit in late October, but of course sport got in the way!

Our county camogie final against Barryroe went to a replay, so I changed my flights and made the move to Calgary on November 10th. Mike had classmates that had already moved to Calgary a few months previous – the oil and gas industry was in the boom, and seeing as Mike graduated with a degree in civil engineering, it seemed like the perfect choice.

KMC: With your GAA background it’s no surprise you quickly found your feet in Calgary with the local GAA club, Calgary Chieftains GAA – how much did linking up with the club help you settle in Canada?

SW: Honestly, I think it made a huge difference. Us Irish are known for our chatty and friendly nature, but it was great to get to know a bunch of Canadian folk right from the get-go. I think it’s important to realise that as much as we love hanging out with our own, it’s also great to mingle with some of the local club members as well. I found that our club is a fantastic resource for job opportunities, accommodation options, and just being a great support mechanism in general.

I had reached out to the club via social media well before I had gotten on that plane to Calgary. The outdoor season kicked off around April 2013, so I ensured I made it to the first outdoor session. The rest, as they say, is history! Seven years later and I’m still heavily involved in the club.

SW: They’re crucial. The homesickness can be hard at times (luckily I haven’t suffered from it too much down through the years), but there’s something special about the GAA community and that family-feel nature. No matter how good or bad you are at the sport, I can almost guarantee that you would be welcomed with open arms. I’ve seen it first-hand in our club. Retention of players is difficult over here, particularly with the two-year working visas that people travel over with, so having that welcoming attitude is really critical.

KMC: What is the GAA scene like in Canada?

SW: It’s pretty competitive overall. It’s hard to compete against the likes of Vancouver and Toronto, as they have a high Irish population. Here in Alberta, Edmonton would be our rivals and the Western Canadian championships would be our big tournament annually. It was actually due to be held in Calgary this July, but due to the current Covid-19 concerns, there’s a strong likelihood that it will be postponed. For this tournament we would see teams from across the west take part across all four codes. The first Canadian GAA championships were also due to take place this September, but this has been postponed to 2021.

KMC: So, you’ve had seven years on the pitch with Calgary GAA, what are the top moments that would make your highlights reel?

SW: 2016 was a huge year for us in terms of successes. We travelled to San Diego in late May and swept the board in both the ladies’ football and camogie competitions. We also made it to the final of the North American Junior A ladies’ football championship in Seattle that year. In 2019, we won the Western Canadian junior ladies’ football final in Edmonton as well as the junior football 7’s tournament in Montreal in May of last year. 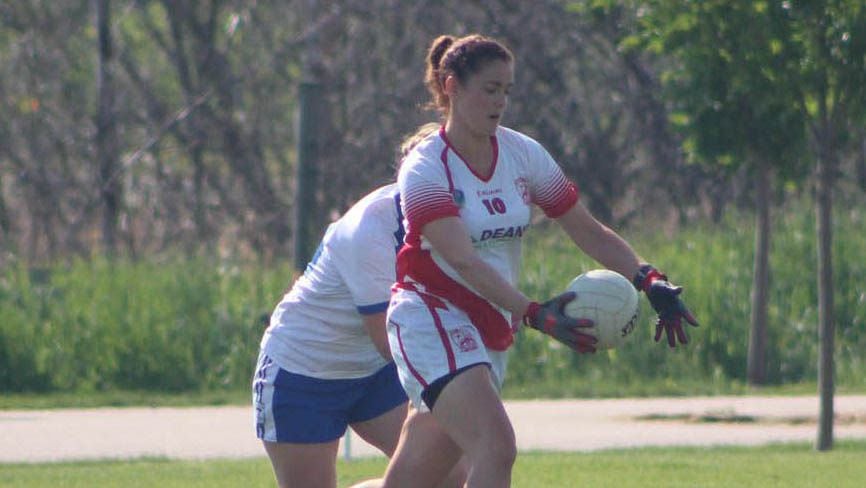 KMC: GAA aside, what else does Canada offer for sport fanatics?

SW: The Canadians sure love their hockey! They’re also big into the Canadian Football League (CFL), soccer, lacrosse and golf.

KMC: It’s seven years since you made the move – would you come home much to Clon and West Cork?

SW: We try and visit home on average once a year. Our last trip was in August 2019. Our next trip is due to be July/August 2020 for our wedding but with the current Covid-19 pandemic, things are a little uncertain.

KMC: I’m not trying to make you homesick here (honest!), but what do you miss most about West Cork?

SW: I really miss being near the water. I never thought it would be something I would take for granted, but five to ten minutes away from Inchydoney is something I’ll never stop appreciating. Of course you’d miss the typical staples – things like Clon black pudding, sausages and rashers are hard to beat! We bought a house here in April 2017 so it’s definitely been easier to see Calgary as home since then.

KMC: You’ve really settled in Canada so, what makes it such a great place to live?

SW: Honestly, the opportunities are just great here. We are only an hour from the mountains, where we can hike during summer and snowboard during winter. Work-wise we definitely see more opportunities here and the overall compensation packages are better (more time off, flexible working environments). Healthcare is also excellent over here – we don’t pay to visit our GP, and prescriptions are typically 90% covered. The overall standard of living over here makes it quite the appealing country to live in.

KMC: It sounds like it’s been an incredible adventure since you made the move to Canada – does any one moment stand out above the others?

SW: I’d say I’d be in big trouble if I didn’t say the trip we took to Vancouver Island in July 2018 – this is where we got engaged! Mike picked a stunning spot along the Wild Pacific Trail in Ucluelet to pop the question; it took me completely by surprise and it was without doubt the most memorable trip we’ve taken! We also became Canadian citizens in July 2017, and we’ve had some pretty amazing snowboarding weekends over the last number of years.