Canon Crowley Park’s main playing pitch never looked better in front of an expectant crowd. Weather conditions were perfect as Drinagh went close inside the first minute. Keith Jagoe ghosted in behind Dunmanway back four but was pushed wide before forcing Stephen Daly into a save from a tight angle.

Their opponents heeded that early warning however and promptly broke the deadlock after only three minutes. The ball fell to Mark Buckley in the corner of Rangers’ penalty area and Town’s striker thundered an absolutely marvellous first-time effort past Rob Oldham.

Dunmanway were anxious to build on their positive start and went close to netting a second goal from a corner five minutes later. Rob Oldham gathered at the second attempt before Gearóid White, Keith Jagoe and Robbie McQueen’s growing influence saw the home side enjoy a productive spell. Yet failure to adequately test Stephen Daly saw the visitors comfortably maintain their 1-0 lead at the 20-minute mark. 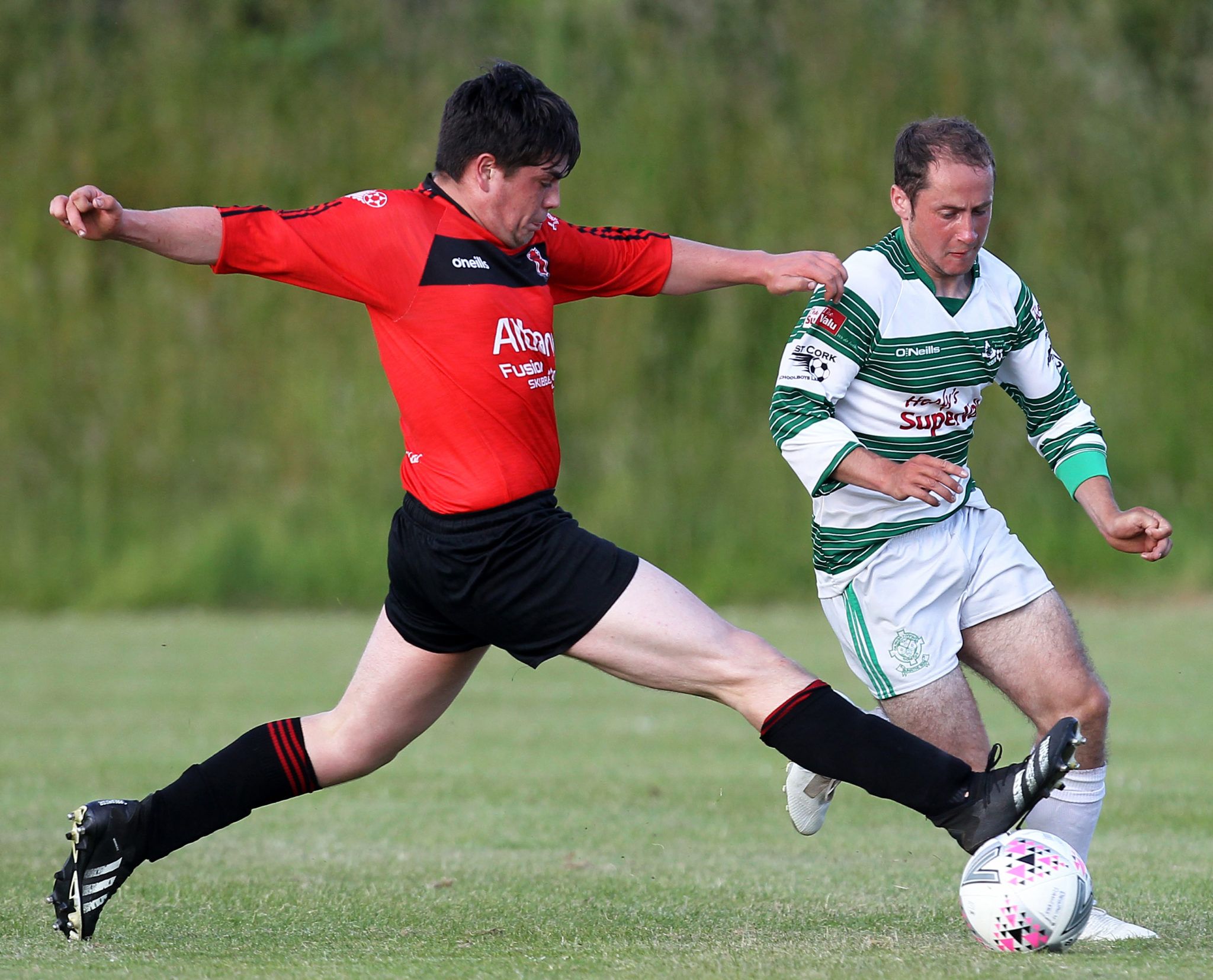 Cullan Barry fired over and Barry O’Driscoll (H) had a shot blocked at the opposite end before an intense cup tie produced its second magical moment.

There appeared little danger when Barry O’Donovan gathered possession 25 yards from the Drinagh goal. O’Donovan didn’t think twice and unleashed an unstoppable effort into the roof of the net. It was a goal of stunning quality and would not have looked out of place at this summer’s European Championships.

To their credit, Drinagh refused to panic and enjoyed the better of an entertaining second quarter with O’Driscoll (H) volleying wide and forcing Stephen Daly into a full-length save. Chances came thick and fast as Robbie McQueen walloped a left-footed attempt an inch over the crossbar prior to Mark Buckley finding the side-netting.

Much of the second half was dominated by a Drinagh Rangers team desperate to find a way back into the game. The Canon Crowley Park side peppered their opponent’s penalty area with with a series of corners and set-pieces yet, uncharacteristically, struggled to apply a finishing touch.

Stephen Daly proved a confident goalkeeper throughout the evening and his diligence coupled with Cian Collins and Stephen O’Donovan’s defending helped Town see out a difficult period.

It was the visitors rather than the hosts who came closest to scoring next following a swift counter-attack after 57 minutes. A brilliant Rob Oldham save denied Johnny Kelly a certain goal and the same Dunmanway player headed over from six yards a minute later. 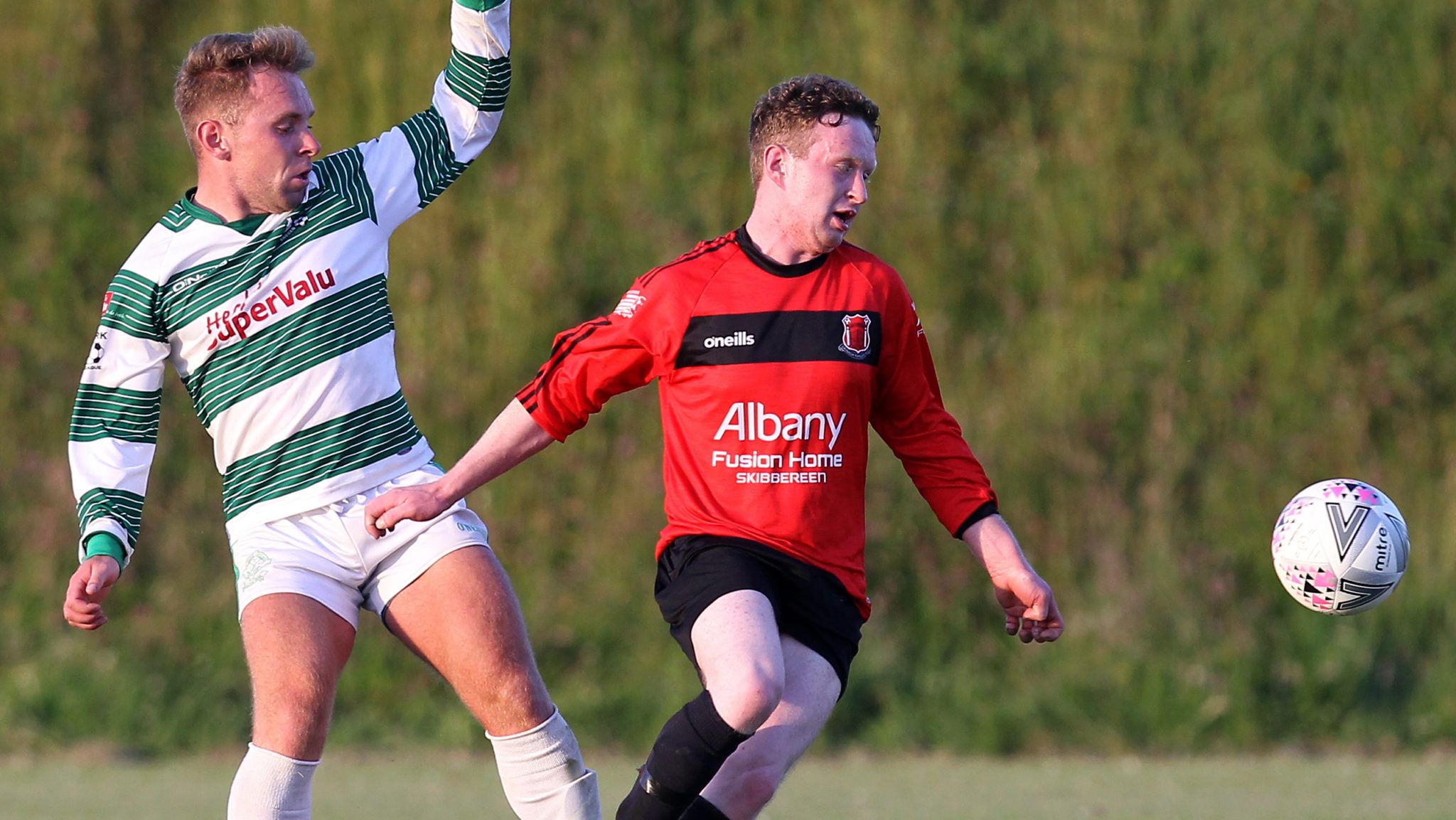 Unsurprisingly, both teams tired amid the hot conditions and scoring opportunities dwindled until Dunmanway created another terrific opening. Mark Buckley met a deep cross with a close-range header that rebounded off the crossbar and away to safety.

Robbie McQueen saw a free-kick deflected away for a corner as Rangers intensified their search for a goal. There would be no further additions to the score despite Barry O’Driscoll (H) and Mark Buckley going close in the closing stages.

Dunmanway Town’s reward for defeating their fiercest rivals is an away trip to Town Park in Schull. Bunratty United will provide stiff opposition in the Beamish Cup quarter-finals but a repeat performance should see the cup holders through.