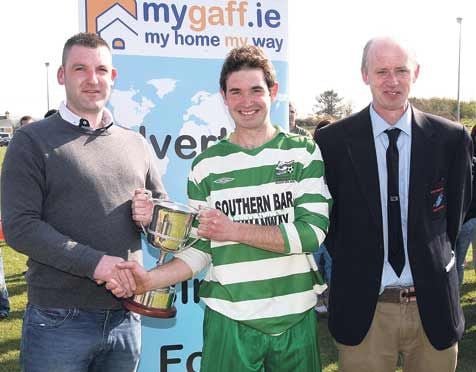 Scoreless at the interval, a cagey final burst into life during a stunning second period that yielded six goals and entertained an appreciative crowd before Dunmanway eventually condemned a well-organised Crookstown to a second consecutive mygaff.ie Cup final loss.

‘It was a mixture of relief and elation at the full-time whistle as I believe we could just as easily have lost this final at one stage in the second half,’ commented Dunmanway manager John Buckley to The Southern Star.

‘Credit to Crookstown for making it so difficult for us, they never give us anything easy but our lads never gave up and produced some quality football to see us through. We missed a couple of chances late on but we scored the important goals when it mattered.’

‘I think the experience of being one down to Togher Celtic in the cup semi-final before coming back to win it in the second half definitely stood to us out there (on Sunday),’ noted Town’s coach Andrew Healy.

‘We had five of last year’s U18 panel in our cup final squad which was nice to see and it was also important for our younger club members to be part of this victory as it will hopefully inspire them in future years.’

Last Sunday’s cup final began in blazing sunshine on a well-prepared Drinagh playing surface with Crookstown going close in their opening attack. James Kelleher’s turn and shot took a slight deflection and flew past an upright, as Crookstown settled to their task with Mick Deasy and Colm Crowley prominent in midfield.

It took an Eoin Lavers free, that forced Dean Knight into an excellent stop, to spring the Mohona club into action during a fractious opening quarter that produced few quality moments.

Andrew Kelleher proved Crookstown’s most potent attacking weapon in the first half, linking well with Martin McCarthy and Colm Crowley, yet the trio struggled to make any headway against Vincent and Denis Healy in the heart of Dunmanway’s defence.

Town steadily improved as the half progressed, attempting to utilise Barry O’Donovan and Mark Quinn’s pace on either flank as well as weaving intricate moves through the centre thanks to Eoin Lavers and Timmy O’Donovan’s promptings.

For all their possession, Dunmanway’s failure to involve Johnny Kelly or Jerry McCarthy on enough occasions meant a tight final unsurprisingly remained scoreless after half an hour.

Crookstown threatened sporadically and had loud appeals for a penalty waved away when James Kelleher went down in the area before Dunmanway cleared the danger.

Martin McCarthy tested Tom Murphy from long range before Town had a goal ruled out for offside to conclude an opening 45 minutes with little to separate two evenly matched teams.

The second half exploded into life with a Dunmanway goal one minute after the restart. Mark Quinn underlined his attacking threat with a well-taken effort to edge the Mohona team ahead.

Dunmanway cleared a routine free and the ball fell to Mick Deasy 25 yards from goal. The Crookstown midfielder didn’t hesitate and unleashed a thunderous first-time effort that rocketed into the top corner of net.

It was a goal worthy of gracing any cup final and a rejuvenated Crookstown capitalised on a shell-shocked Dunmanway to edge in front just minutes after drawing level.

Andrew Kenneally took advantage of a defensive mix-up to race into the box and slot the ball beyond Tom Murphy for a 2 – 1 Crookstown lead.

To their credit, Town saw out a difficult period and played their way back into contention before netting a superb equaliser just past the hour mark.

Good approach play from Jerry McCarthy ended with man-of-the-match Eoin Lavers arrowing home a daisy-cutter from the edge of the box to level matters at 2 – 2.

An absorbing cup decider remained all square with 12 minutes to go and extra-time looking a distinct possibility when Dunmanway Town’s captain and top scorer made his mark on the occasion.

Jerry McCarthy had been well marshalled up to that point but got on the end of a lightening breakaway to beat Dean Knight with a low finish and send the Dunmanway supporters into wild celebrations.

Crookstown made the necessary tactical switches by committing extra numbers into their forward division for the final minutes but a committed Dunmanway back four restricted their opponents to long range efforts before a fourth and final strike settled the outcome.

Mark Quinn was rewarded for a superb second half display with a breakaway goal deep into injury time to cement Dunmanway Town’s victory following a breathless second half and memorable occasion.