The Clonakilty team that won the Cork, Bandon and South Coast Railway Shields in football and hurling in 1914.

SPECIAL train excursions were a way of life for the people of West Cork for over 70 years and trips to seaside resorts like Courtmacsherry and Bantry were eagerly anticipated when cars were scarce.

In the 1950s, as young lads, we travelled by train to Bantry regatta and Clonakilty show every summer.

But the GAA match excursions were the big ones.

The first recorded GAA excursion in West Cork was an unusual one.

The Skibbereen and Schull Tramway and Light Railway had been opened in 1886, just in time for the coming of the GAA.

On January 15th, 1888, Skibbereen O’Brien’s played a return football challenge game against Carbery Rangers in the Marsh in Skibbereen.

The railway company ran a special GAA excursion train from the Schull/Baltimore area to the game.

It was a huge success with hundreds packing into the tram and over 5,000 attending the game.

The teams were paraded around the town behind the Fr. McCartie Brass Band before the game won by Skibbereen.

The following Sunday another challenge game between Skibbereen and Dohenys was also played in Skibb.

The Dunmanway team and supporters arrived on the noon train with their own brass band.

At the same time the Schull tram arrived packed with more supporters and a huge crowd, estimated at 8,000, paraded behind two bands to the Bishop’s residence, and then to the pitch.

That evening the Dohenys were escorted back to the train and the crowd was so big they couldn’t all fit in the station, where Mr. Twomey, Dunmanway, gave a rousing, patriotic speech.

Unfortunately, not all GAA excursions had such happy endings.

1888 was also the year that championship football was first played in West Cork and Kilmacabea emerged as the first West Cork champions, before advancing to the county semi-final against the great Lees of Cork city, who had won the inaugural county championship the previous year.

The semi-final took place in Bandon.

Unfortunately, the game lasted only half an hour as the referee, threatened by a Kilmac player, called off the game, awarding it to Lees, who were leading by a point to nil at the time.

They beat Dromtarriffe in the final the following weekend.

However, the sport was only beginning. The Lees contingent left on the 4.30pm train to Cork but the Kilmac supporters were left waiting for the 7pm train.

No doubt the drinking establishments did a roaring trade because as the crowd gathered at the railway station, a huge row broke out between the supporters.

Some witnesses said it had started between two Kilmac supporters, while others claimed that a Kilmac player had been set on by a Bandon mob who claimed he had kicked one of their players in a challenge game a few weeks previously at Kinsale Junction.

Be that as it may, it took a large contingent of railway staff and constabulary to quell the fighting after a considerable time.

One Bandon man had his fingers badly bitten and others received severe wounds from kicking.

Fifteen years later, in 1903, came a repeat in Bandon, this time on the bridge in the town centre.

Clonakilty and Dunmanway were the only teams to enter the West Cork championship that year and were fixed to play in Bandon.

The Clon contingent travelled by train, with Dohenys coming by road in brakes.

Unfortunately, no referee turned up and no game was played.

Dohenys refused a Bandon referee. Clon togged off, kicked the ball and claimed the match.

Following the abortive attempt to play the game, in lashing rain, both camps adjourned to the local public houses and when Dohenys eventually gathered to head home on their brakes, they were taunted by the Clonakilty contingent.

The result was a ferocious fight which lasted over 20 minutes and was only halted with the arrival of a large contingent of military from the two barracks.

A marvellous description of the free-for-all is given in the Skibbereen Eagle.

One Clonakilty man brandishing a blackthorn stick with rare abandon. Many of the protagonists ended up in court the following week.

The incident became known as ‘The Battle of Bandon Bridge.’

At that time people rarely left their own districts.

This is plain to see when the Skibbereen club hired a train to travel to Dunmanway to play the locals on February 5th, 1888.

The train cost £10 to hire and the club’s fears that the crowd would be too small to cover the cost were unfounded.

With so many people turning up the train was 45 minutes late in departing and took over an hour to cover the 16 miles to Dunmanway.

On arriving, some of the crowd headed for mass in the church but the majority headed to the pubs, determined to show the Dunmanway people how they could drink.

The game ended in a draw but the results of the drinking during the day were evident on the train trip home as several fights broke out, windows were smashed, noses bloodied and black eyes dished out.

But the advantages of having the train as a mode of transport for the early GAA clubs more than outweighed the drawbacks as the association struggled to put order and discipline on its activities. 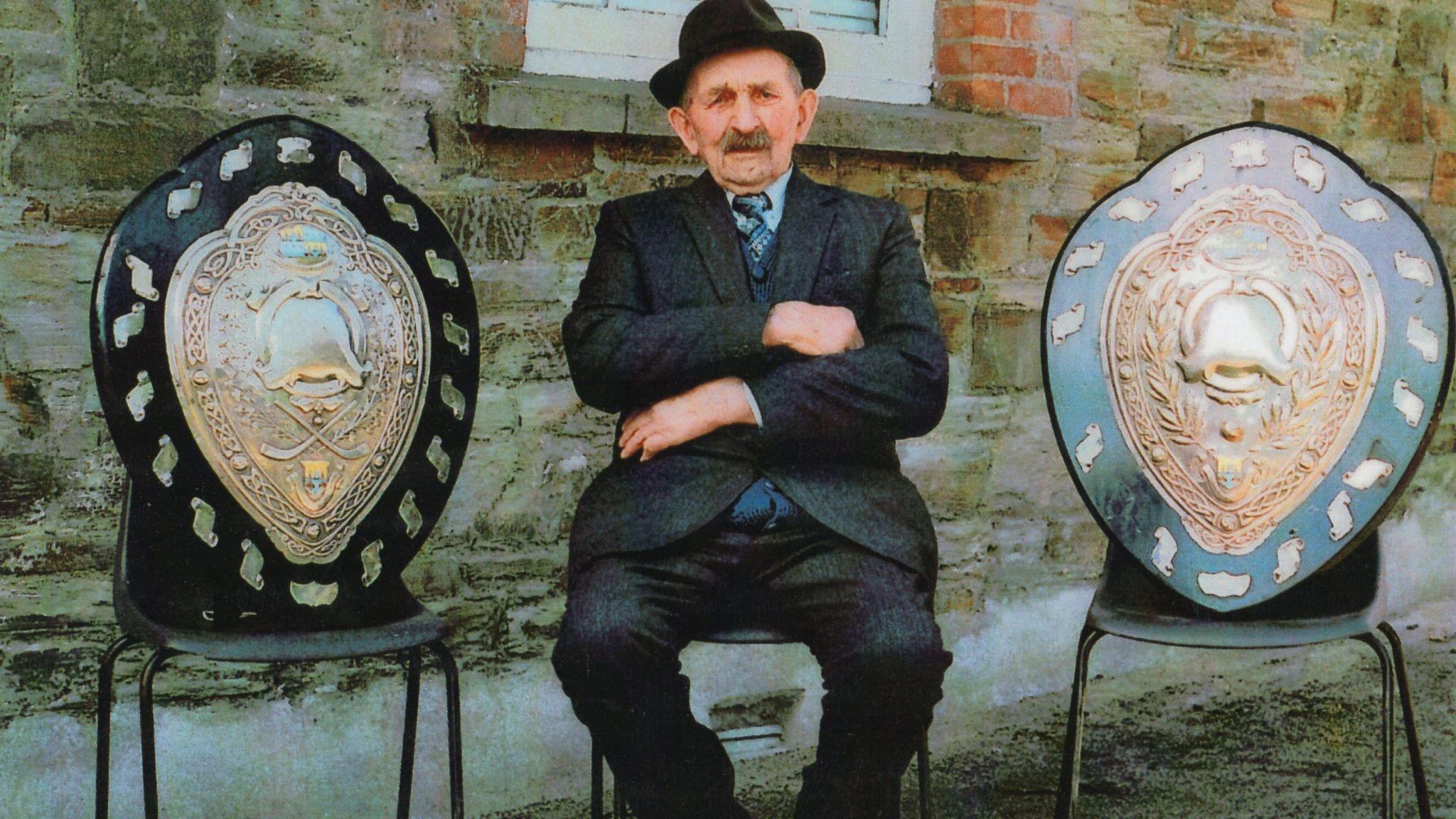 John O’Leary, Kilbree, a Clonakilty player on the 1914 team that won the Cork, Bandon and South Coast Railway Shields. John lived to be 105.

The Cork, Bandon and South Coast Railway Company more than played its part in promoting the GAA.

In the turbulent opening two decades of the 20th century, the GAA in West Cork was still struggling to survive with many of its best players joining the big city clubs.

Between 1913 and 1914 in an bid to encourage local clubs, the railway company presented two shields for competition between the junior teams in the region.

Clonakilty, inspired by the great John ‘Count’ Donovan, emerged winners of both the football and hurling shields.

Those shields were never played for again and can be seen today in the Clonakilty museum.

In the early 1950s, the small number of passengers using the trains almost led to the closure of the line and it was the GAA excursion specials that saved the day.

In 1954, the new diesel engines replaced the steam engines on the line and the first diesel excursion was for Bandon v Beara in Bantry on April 11th.

All 400 seats were taken leaving Bandon and a further 320 crammed onto the train between Bandon and Bantry.

Cheering crowds greeted the new train all along the route and, especially, at Bantry station.

That October the record for West Cork GAA excursions was broken when Clonakilty played St. Nick’s in the county final in the Athletic Grounds.

720 passengers crammed the train from Clonakilty while a second excursion train from Bantry brought 460 supporters.

That figure of almost 1,200 passengers was never matched and it took three trains to take them all home.

Unfortunately, Clon were hammered by Nick’s in the final.

The last excursion was on September 25th, 1960, the year before the railway finally closed down.