Phil Healy pictured with her sister Joan and mum Phil after she won the women's 400 metres. (Photo: Martin Walsh)

DESPITE the presence of some of the luminaries of world athletics such as twice Olympic and three-time World 800m champion Castor Semenya, it was the Irish stars who shone last Tuesday night at the BAM/Cork City Sports and none brighter than Glengarriff’s Darragh McElhinney.

The 21-year-old can do no wrong at the moment, having already smashed the Irish U23 record for the 5000m with a time of 13:17.17 and easily taking the national 5000m just over a week ago. Then, just three nights before Cork, he broke his own Irish U23 record by .05 of a second when finishing third in a thrilling Morton Mile at Santry in a time of 3:58.15.

Before a large and enthusiastic attendance at the MTU Athletics Stadium in Bishopstown, McElhinney made his intentions clear from the start of the 3000m. After just one lap he had only the pacemaker for company with the rest of the 15-strong field strung out behind him. After the pacemaker had done his duty, the West Cork athlete only had the clock to contend with, along with the strong breeze on the back straight. 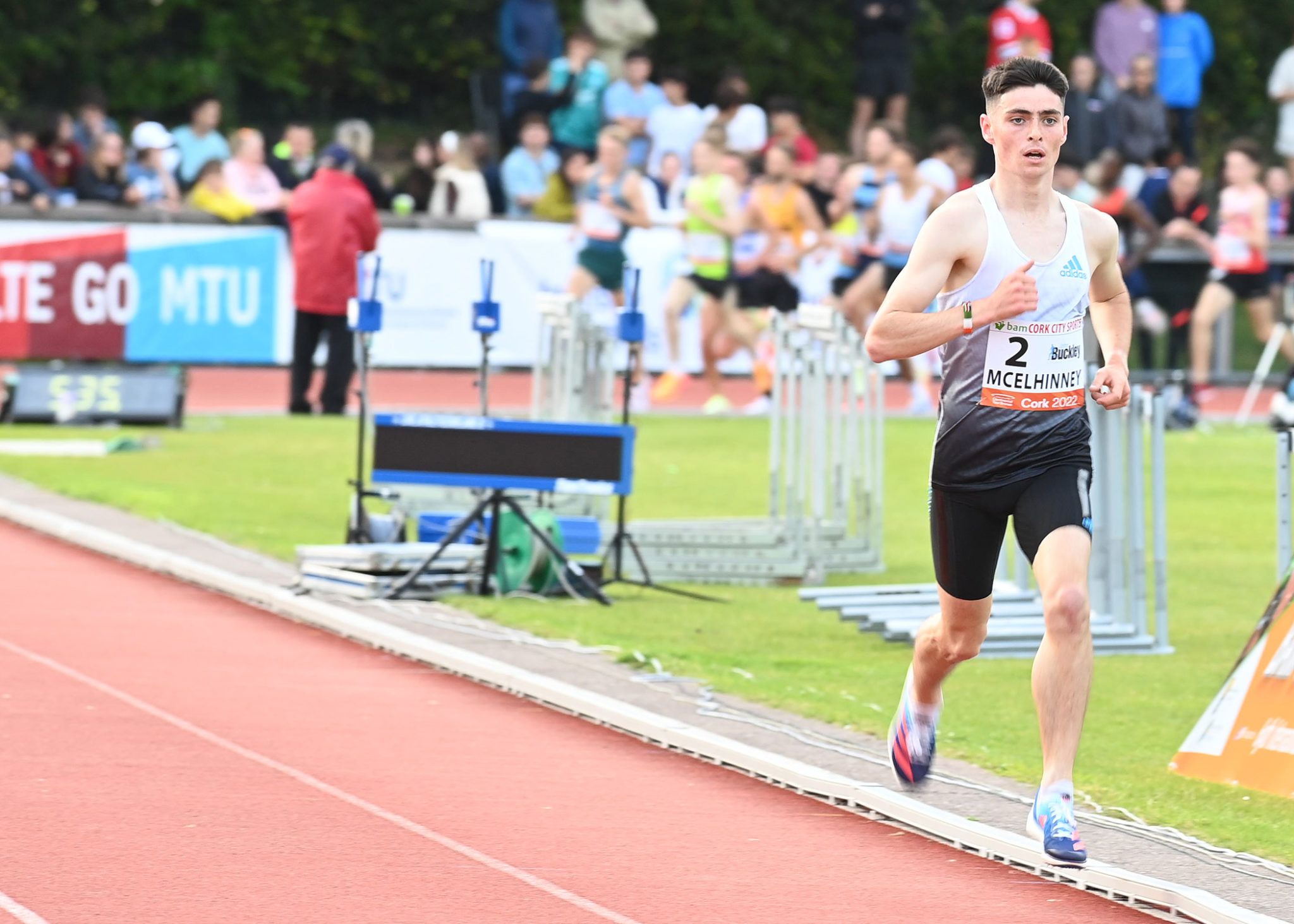 Darragh McElhinney on his way to an emphatic victory in the men's 3000m at the Cork City Sports.

‘It was hard out there, once the pacer dropped out I was on my own,’ McElhinney admitted. ‘I think I have a lot more in me, time-wise. But all things considered I was delighted in front of the home crowd. Maybe if I had a few more with me I would have been a bit quicker. But I wouldn’t change anything. When I had the gap, I just tried to hold it as best I could until I got to the bell. The pacer was brilliant; I wouldn’t have been able to do it without him.’

Always a firm favourite with the home crowd, surprisingly Phil Healy had never tasted victory at the Cork meet. But she made no mistake on this occasion when taking the 400m in 52.06 ahead of Cliodhna Manning from Kilkenny (52.76) with British runner Carys McAulay third in 53.78. Off to a good start, the Bandon athlete soon powered away and her time wasn’t far off the 51.82 she had clocked earlier in the season.

‘Coming down the back straight the crowd really carried me home, so I was delighted to win as it's always a super meet. I always made sure Cork was in my plans, in 2018 I came her and broke a national record, and in 2019 I had a season’s best so it brings out the best in me,’ she said. 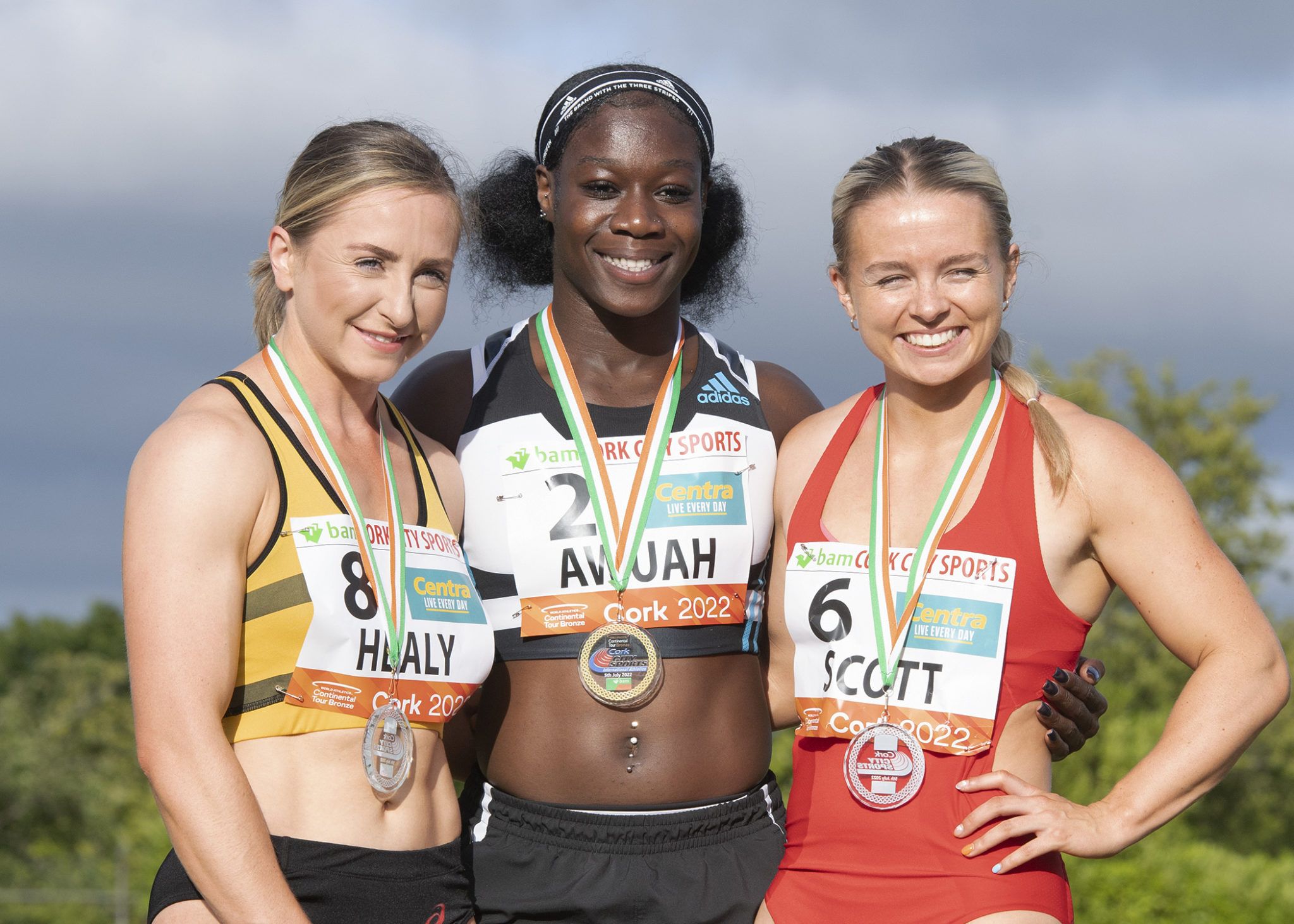 Ballineen sprinter Joan Healy on the podium after the women's 100m, alongside winner Kristal Awuah and Molly Scott.

Phil’s sister Joan was also well pleased with her third place in the 100m, confirming the good form she has shown this season. At the national championships she gained the bronze medal, her time there of 11.47 equalling her best from 2018. Up against Molly Scott, who had beaten her for second on that occasion, Joan was given the same time of 11.41 as Scott in second but as the wind was over the limit it won’t count. The race was won by Kristal Awuah of Great Britain in 11.36.

‘I was really happy with that after being out with injury for the past two years,’ said Joan. ‘It got to the point where I thought I wouldn’t be able to make the nationals so to make the top three there, I was so delighted. I was really looking forward to running here as I knew I was in good shape, it’s a pity the wind was illegal. I’m off to the World Championships next week in Oregon so I’m really looking forward to that.’

Other results from a West Cork angle include Eoghan McElhinney’s fine eighth place in the open 3000m in a time of 8:40.78 with Bandon’s Gavin Kenny not too far behind in 8:45.14, and Shane Howard – also Bandon AC – finished fifth in the long jump with a leap of 7.49m. 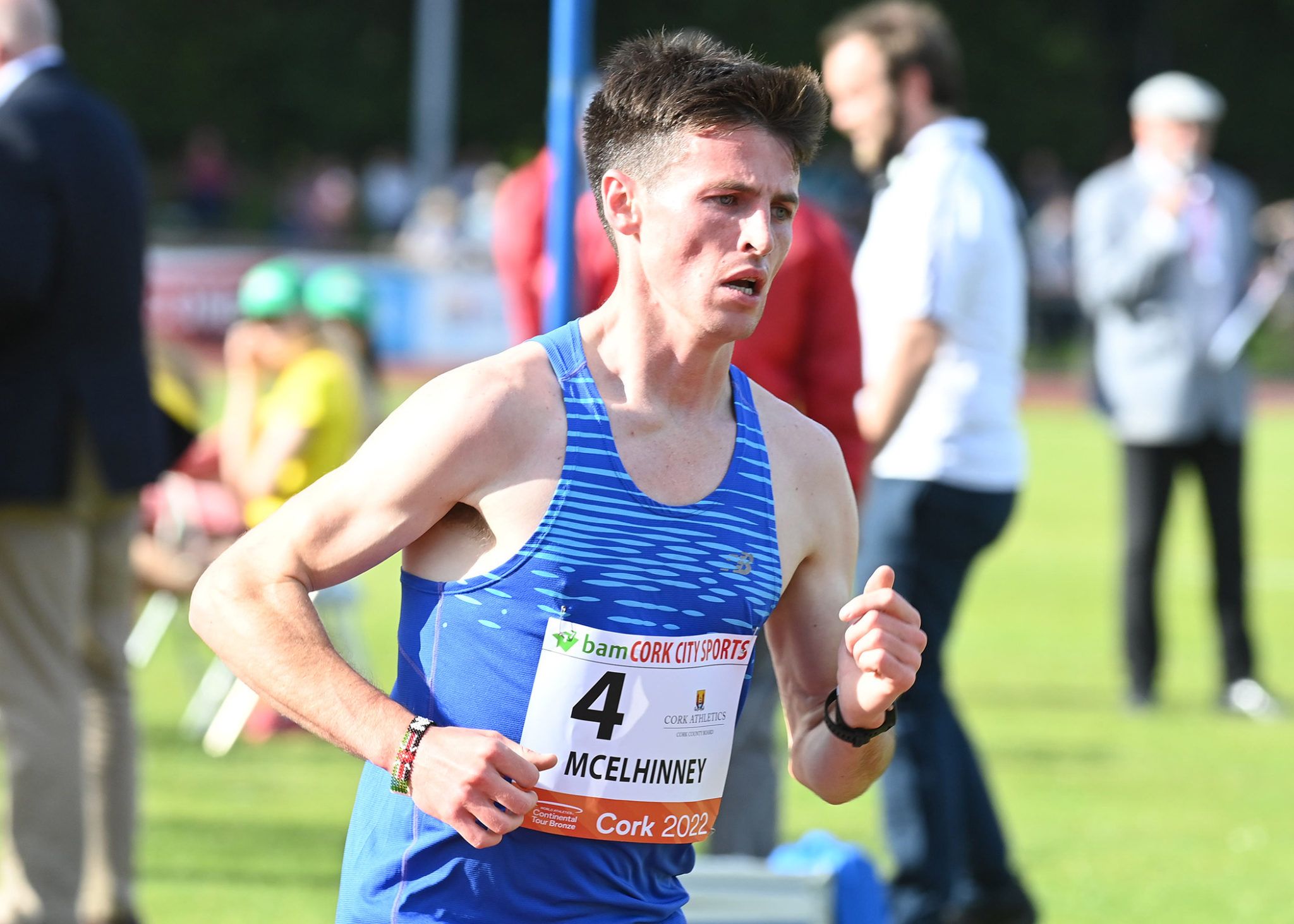