BALLYLICKEY’S Daniel Cronin – in the Cronin’s Hardware & Agri Supplies backed Ford Fiesta R5 – finished eighth overall on his maiden outing on Sunday’s Donegal Harvest Rally. After a cautious start and with his Killarney co-driver Shane Buckley, they picked up six places during the day’s six stages.

Owenahincha co-driver Eamonn Hayes was also on a first voyage, in a World Rally Car where he was co-driver to Welshman Steve Wood, and they finished 29th.

Wet conditions made the stages even more demanding and many drivers adopted a cautious approach. However, Boyle, who opted to drive his usual Fiesta WRC, swept into an early 2.7 seconds lead. Devine was second with Gary Jennings (Fiesta R5) another 1.9 seconds further behind in third.  It was a baptism of fire for Daniel Cronin. On the previous day’s reconnaissance of the stages, he found the terrain so much different from stages in Cork and Kerry. It certainly wasn’t the place to try and be brave on his first competitive outing in the county. He spun on the latter half of the stage and duly finished the stage on the outskirts of Donegal town down in 14th spot, 24.5 seconds off the lead.

Devine was best through the second stage and moved into a 2.9 second lead over Jennings. Boyle lost time with brake issues and slipped to third, 7.4 seconds off top spot. Five-time West Cork Rally winner Donagh Kelly held fourth. Cronin made up two places. 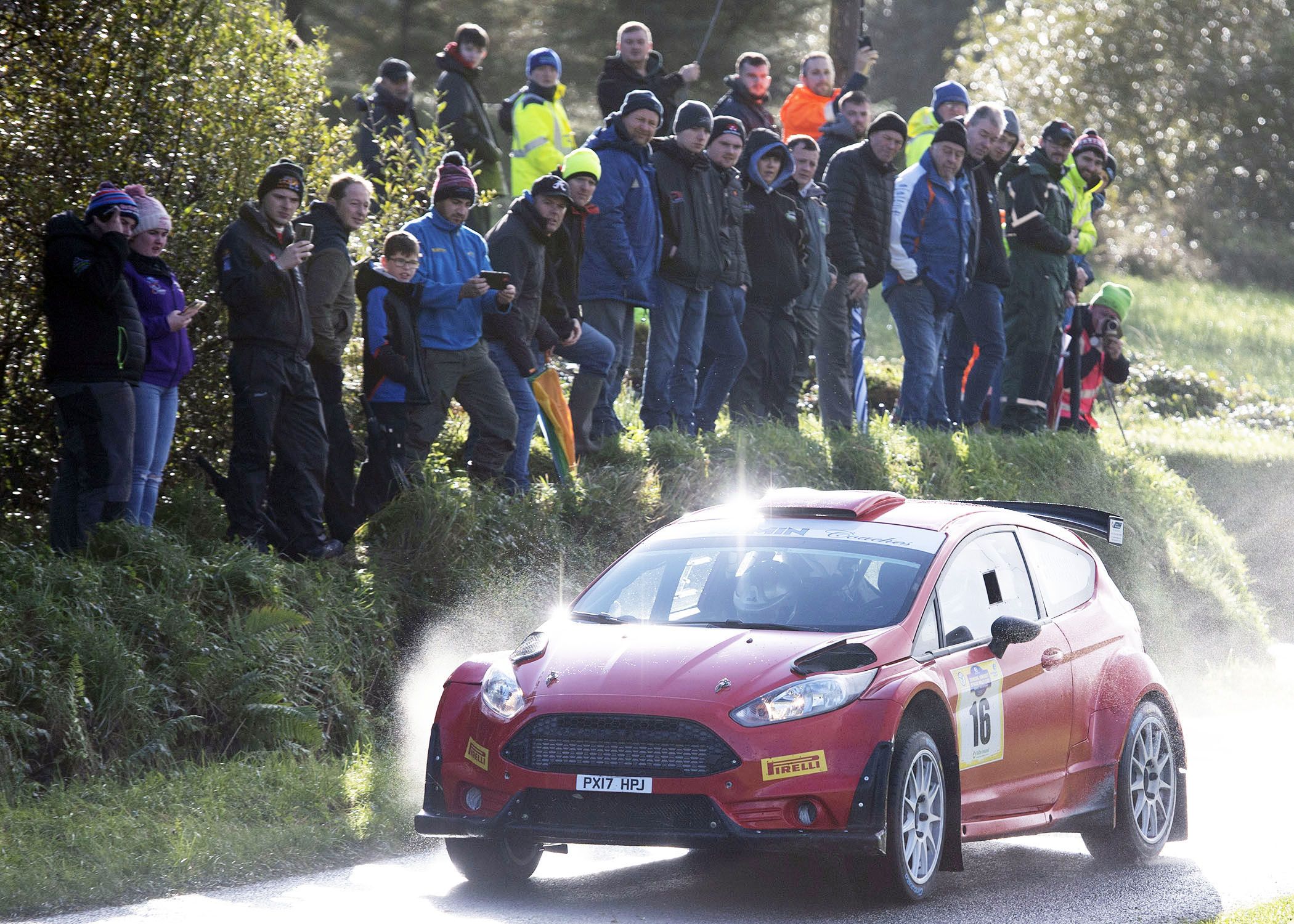 Both stages were repeated and the weather conditions continued to be a mix of sunshine and showers. Devine maintained the lead even though he spun at the end of SS 3 and lost five or six seconds. Boyle moved into second and was only five seconds in arrears; evidence of how hard he was trying came on the fourth stage when he slid up a bank where a wire fence ripped off the rear spoiler that was returned to him at the service by some spectators. Jennings also called on spectators that helped to get his right-hand drive Fiesta back on the road after he slid off and landed on a hedge, his car was undamaged but the time lost saw him plummet to 34th overall. Having made some set-up changes Sam Moffett was able to push a lot more and he slotted into third ahead of Donagh Kelly. Tyrone’s Cathan McCourt and his Millstreet co-driver Liam Moynihan (Ford Fiesta R5) occupied fifth. Meanwhile, Cronin broke into the top ten, holding ninth overall.

The battle for supremacy increased when Boyle cut the deficit to 3.8 seconds on the penultimate stage, but Devine stretched his lead to 9.7 seconds in the final stage to clinch the victory. Sam Moffett finished third with Cathan McCourt, Josh Moffett (Hyundai i20 R5) and Donagh Kelly rounding out the top six.

‘It’s a fair learning experience. Now I know I did the recce (reconnaissance) yesterday but I don’t think I have ever done two stages as tricky as those. They were narrow and bumpy,’ Cronin said.

‘As the day went on we changed some settings and I had a good run through the last two stages, I was happy and comfortable. We are a bit – well, maybe more than a bit – off the boys at the top, but they have newer cars.

I was nervous this morning because of the rain. I had no test in the car beforehand and I didn’t like the set-up we had for the first two stages, but once we got that tuned in, it was a whole lot better.’

Cronin’s next outing will be the Wexford Rally next week. He also hinted at competing in next month’s Kerry Winter Rally.

Meanwhile, Owenahincha co-driver Eamonn Hayes, on his first outing in a World Rally Car and accompanying Steve Wood, remarked, ‘It was a very difficult rally, I don’t think I have ever rallied in that type of terrain and conditions before. It was lovely to sit in a WRC, I suppose the car wasn’t set up for this event, but it was enjoyable. I think Steve would have preferred a smoother event but it was great to be back again.’