MARK O’Donovan admits he struggled initially to adjust to life after rowing.

In early 2020 the former World and European rowing champion decided to hang up his oars. He didn’t want to row anymore.

At the 2019 World Rowing Championships they finished 25th overall and were well off the pace – and clear water away from the automatic qualifying spots (the top 11) for the 2020 Olympics.

The Skibb duo had swapped the non-Olympic lightweight pair, which they dominated in a glorious 2017 season, for the Olympic-class heavyweight pair because they wanted to race at the Games, but their bold move didn’t pay off. By 2019 they had slipped nine places from 16th at the 2018 Worlds.

The Skibb pair had also lost their Sport Ireland funding in 2019, a decision O’Donovan described at the time as ‘demoralising’ and ‘a kick in the teeth’. It was one setback after another, on and off the water.

‘That winter we couldn't really get too much of a debrief from some of the coaches and we were left in no-man’s land. I spoke to a previous coach and he told me to give it another lash. So I went back, fully committing.’ 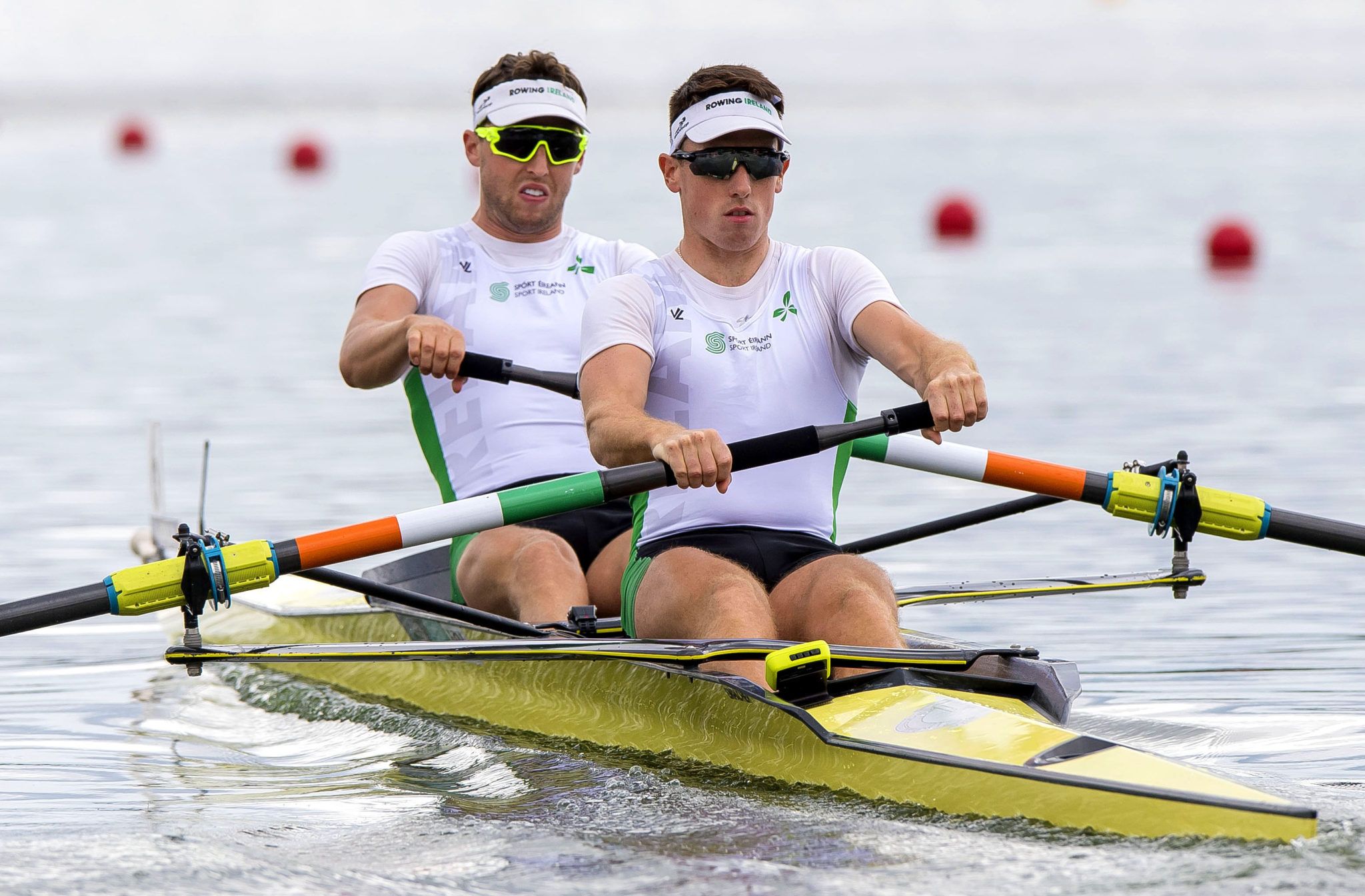 Mark O'Donovan. left, and Shane O'Driscoll in action in the Irish men's pair.

It didn't take long for O’Donovan to figure out this wasn’t what he wanted to do. He recalls being on a rowing machine at the National Rowing Centre, working on hard training pieces, but halfway through 12 repetitions it was hurting too much. There were also too many negative thoughts in his head. Fatigue would set in as well. He wouldn't finish out the session. He couldn’t ignore the alarm bells.

‘When I thought about it, I knew that I didn’t want to do this anymore,’ he admits.

‘I didn’t want to be sitting in a boat on the start-line with other crewmates and knowing that I’m not prepared for this as well as I could be. It wouldn’t be fair on them or myself.’

In rowing you have to commit everything – and by March 2020 O’Donovan’s tank had run empty. He was 31 years old and had to transition from Mark The Rower, which had been his identity, to Mark. He had to leave the bubble of being a full-time, high-performance athlete and now find a new identity in the ‘real’ world. 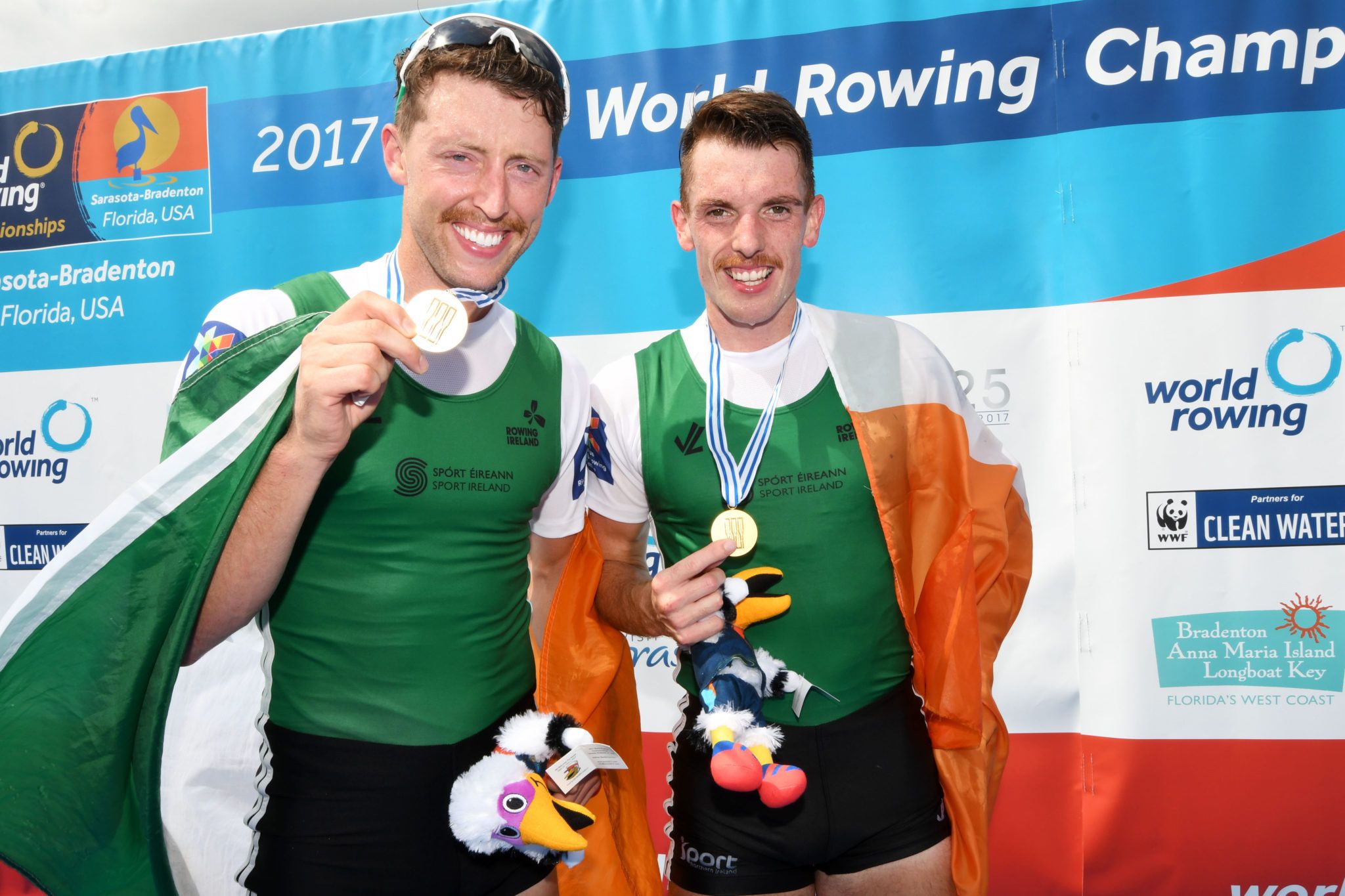 Mark O'Donovan and Shane O'Driscoll celebrate winning gold in the men's lightweight pair at the 2017 World Rowing Championships in Florida.

Rowing had been his life. From learning his trade on the River Ilen with Skibbereen Rowing Club to winning World U23 silver in 2010 to that magical 2017 season when O’Donovan and his partner in crime, O’Driscoll, conquered the world of the men’s lightweight pair. Great times. Magical memories. But he felt it was time to move on.

‘Most people wouldn’t have known that I stopped rowing,’ he says.

‘They'd ask how it was and I’d tell them training was going well. I didn’t want to bring it up. I was ashamed that I had stopped. I couldn’t admit that rowing was finally over for me. I didn’t want to talk about it.

‘After a couple of months, when I got comfortable with myself and found another path, I started really enjoying other aspects of life. That’s a great positive to come out of it with. Others aren’t as lucky as I was; I came around pretty quick.

‘Then when people asked about rowing, I was comfortable enough to say I had finished up and was looking for a job. It actually didn’t make any difference to the people who were asking me. It was their conversation starter because I was Mark the Rower and they were just being nice, but I took it up the wrong way.’

This all played out in early 2020, at the same time when the Covid pandemic first struck and sent the country into lockdown. There wasn’t much to do or anywhere to go. At the time he was living in a house in Dripsey with his partner, Clodagh, a Sport & Exercise Psychologist whose expertise Mark leaned on.

‘I was her guinea pig for a while,’ he laughs, but by that summer, he was in a better place – and cycling more and more, within the restrictions at the time. It was the ideal sport to help maintain his fitness levels. His interest in cycling dates back to when he was studying his Masters in Sports Performance at UL in 2014. A friend from Shannon Rowing Club, Liam Butler, also cycled with Limerick Cycling Club and Limerick Triathlon Club, and O’Donovan joined them for a few spins. He enjoyed this sport on land. Six years later, he was back on the saddle. Another friend, Trevor Woods, an Exercise Physiologist at UCC, made the connection to Blarney Cycling Club – and the opening lines in his latest sporting chapter were penned.

‘100 percent, cycling filled the void after rowing,’ admits O’Donovan, who got great support from his new club.

‘It’s great to pick up something new, learn a new skill and meet new people.

‘It’s very hard to shut down the competitive nature that I have when it comes to anything with physical exercise. Cycling is a great outlet and I’m enjoying it.’ 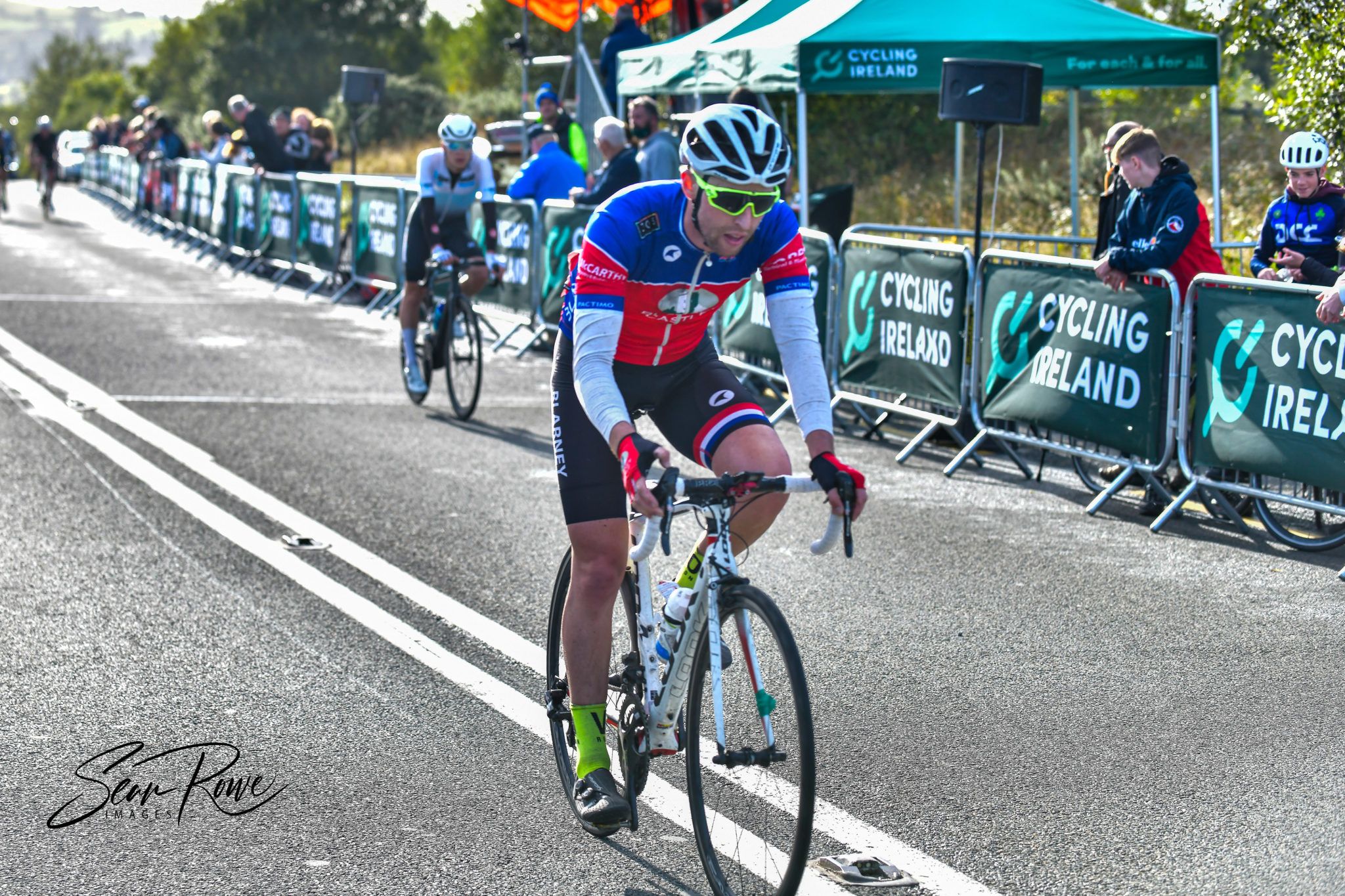 The new kid on the block, O’Donovan started off at the bottom: in the A4 category. That’s the licence that allows less experienced riders to race in competitive events. Points are allocated depending on results so cyclists can progress through the ranks, from A4 to A3 to A2 and then to the lofty heights of A1.

‘I had to learn on the road,’ O’Donovan explains.

‘No matter what people tell you goes on in a race, you need to experience it to learn. My first few races were an eye-opener. When I started off, it was the lower category of racing, A4, and you have a mixture of all different types of cyclists which made it interesting.

‘It was like an accordion set the whole time, there would be a mad burst going up the road, but it would bunch back again, before it goes again. The attacks would come at random areas; it wasn’t very strategic. Sometimes the pace would be very slow, there’s shuffling around within the pack when there was no need to, overlapping wheels and twitchy handling and simple things that could take you down very fast.’

The former world rowing champion had to quickly find his feet on the road, but his full-time athlete approach didn’t wash away with the tide. He knows how to manage himself in the right way, before, during and after races, but, central to this all, he is enjoying his latest sporting adventure.

‘There is the thrill of speed and trying to go as fast as you can within a certain band of your limitation, and how you sustain that,’ he says.

At the 2021 Rás Cill Mocheallog in Kilmallock, Limerick, O’Donovan and one of Blarney Cycling Club team-mates, Paddy From Donegal, as he calls him, worked together. On the last of a three-lap circuit they were in the lead pack, even though O’Donovan never realised this until the end, and Paddy From Donegal told the Skibbereen man to make his attack on a certain hill roughly 20 kilometres from the finish. No-one went with O’Donovan. He was on his own – but thought there was a small breakaway group still ahead of him. It’s only when he crossed the finish line and saw a man waving a flag and when his partner Clodagh congratulated him that he realised he had won his A3 category – and the Cal McCarthy Memorial Cup.

‘I rang Liam Butler after to tell him. He was saying I was some gobshite to not know I was winning! How many races had I been in and I still didn’t know the inner workings,’ he laughs.

By now O’Donovan was working at Boston Scientific in Cork and was juggling training outside of work, integrating sport into a normal working life. He wrapped his head around this lifestyle quite quickly.

‘I try to get 12 to 17 hours a week on the bike excluding any weightlifting. I don’t know if it’s enough; it probably isn't when it comes to the competitive side, but it’s maintainable which is more important,’ he says, and with the days stretching out longer he expects to spend more time on the bike.

The long-term goal is to reach the A1 category, while this season he’d love to earn his spot on the Blarney Cycling Club team for the biggest race in Irish cycling, Rás Tailteann, the five-day event in June that attracts professional international teams. Rás Mumhan is on in mid-April and Blarney CC will likely have two teams, and this will then lead into one team for Rás Tailteann. O’Donovan has enjoyed a solid start to this season, including a tenth-place finish at the Lacey Cup in Tralee last month.

Cycling has his focus now, but O’Donovan hasn’t shut the door on rowing. The former world champion isn’t likely to return at championship level, but hasn’t ruled out rowing at masters events at local regattas, more for the camaraderie and club feeling than anything else. ‘I don’t care how fast or slow I would be, it would be about the journey,’ he says, ‘to travel around to local regattas because that’s how most people fall in love with the sport when they are kids; that’s how I started. Somewhere along the way things became a little too serious.’

These days O’Donovan, and after years of rowing backwards, is enjoying life moving forward, on and off the bike.