AFTER its three-year forced absence, the Clonakilty Park Hotel West Cork Rally returned with an action-packed 14 special stages recently, as Monaghan’s Josh Moffett and his Wexford co-driver Andy Hayes took their Hyundai i20 R5 to an impressive victory.

In an absorbing contest, they claimed their inaugural win in Clonakilty where they finished 23.3 seconds in front of the VW Polo GTi R5 of Welsh aces Meirion Evans/Jonathan Jackson with Fermanagh’s Alastair Fisher and his Tyrone co-driver Gordon Noble, also in a VW Polo GTi R5, a further 15 seconds behind in third.

In bright sunshine on the Saturday morning, the 2022 Clonakilty Park Hotel West Cork Rally burst into life along the Ardfield coastline where no fewer than six drivers completed the stage within a 5.2 second time-frame.

Dunmanway’s David Guest (Fiesta R5) was next and led the local challenge. He was a further 2.5 seconds behind Fisher and was followed by Owen Murphy and Daniel Cronin, the latter admitted to making a few slight mistakes. 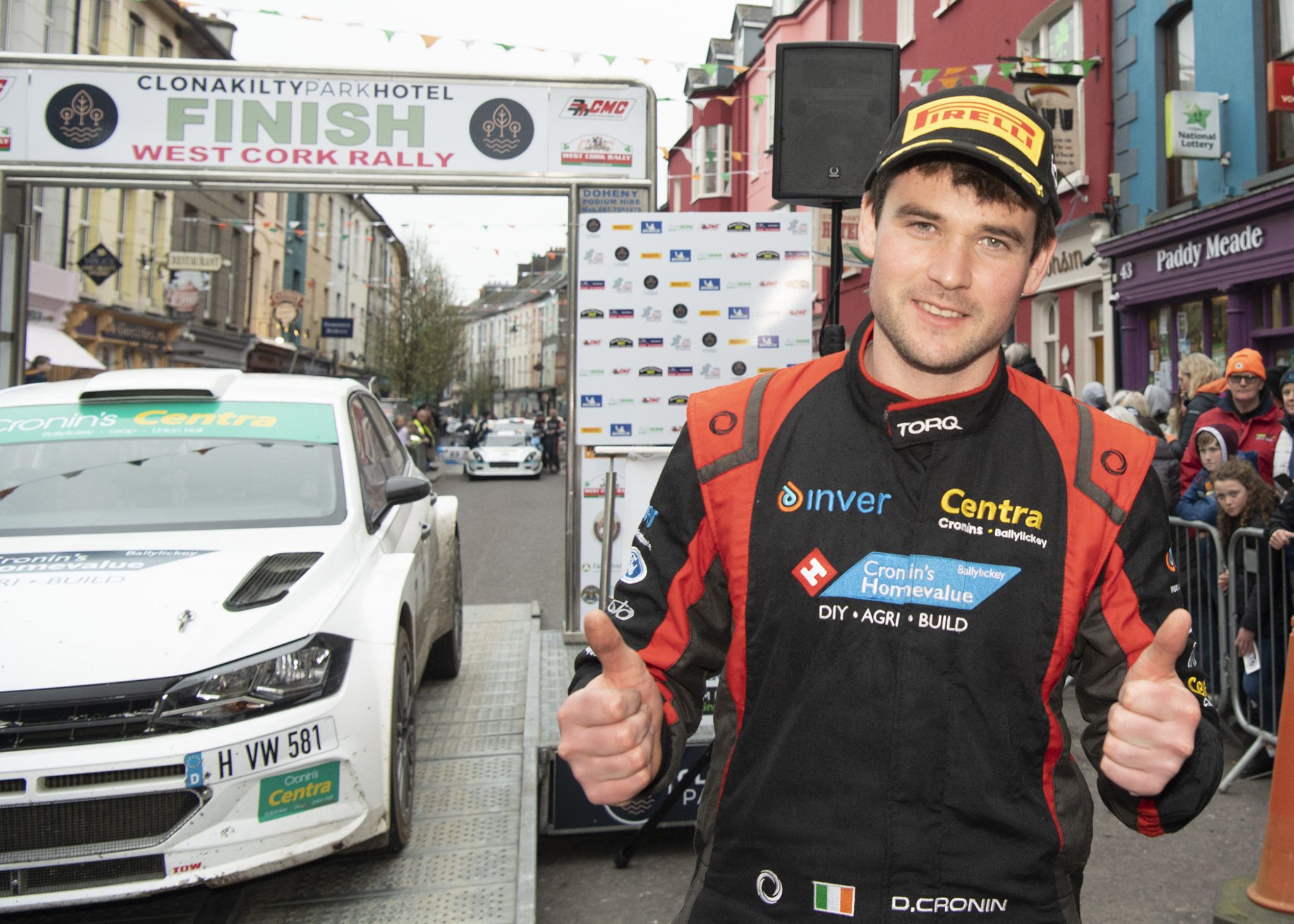 Punching in the best time on the second stage (Hayes’ Cross) Moffett slotted into second, a second behind Devine. Top seed Fisher lost time when he stalled at the stage start. Nevertheless, he remained in sixth. Even though Cronin was quickest of the locals, Murphy did enough to hold seventh spot.

On the repeat of both stages as spectators lined the route, Devine and Moffett were the respective pacesetters, all of which saw Devine lead his rival by 1.8 seconds. The pace of the leading duo was close to the maximum and was illustrated by the time gap of 12.7 seconds to third-placed Greer.  Evans, McCourt and Fisher followed. Seventh-placed Murphy set the best time of the locals as Guest and Cronin completed the top nine.

Switching to the stages at Sam’s Cross and Rossmore, the lead changed for the first time when Moffett, who was quickest on both stages, led Devine by 1.8 seconds at the final service halt of the day after SS 6. 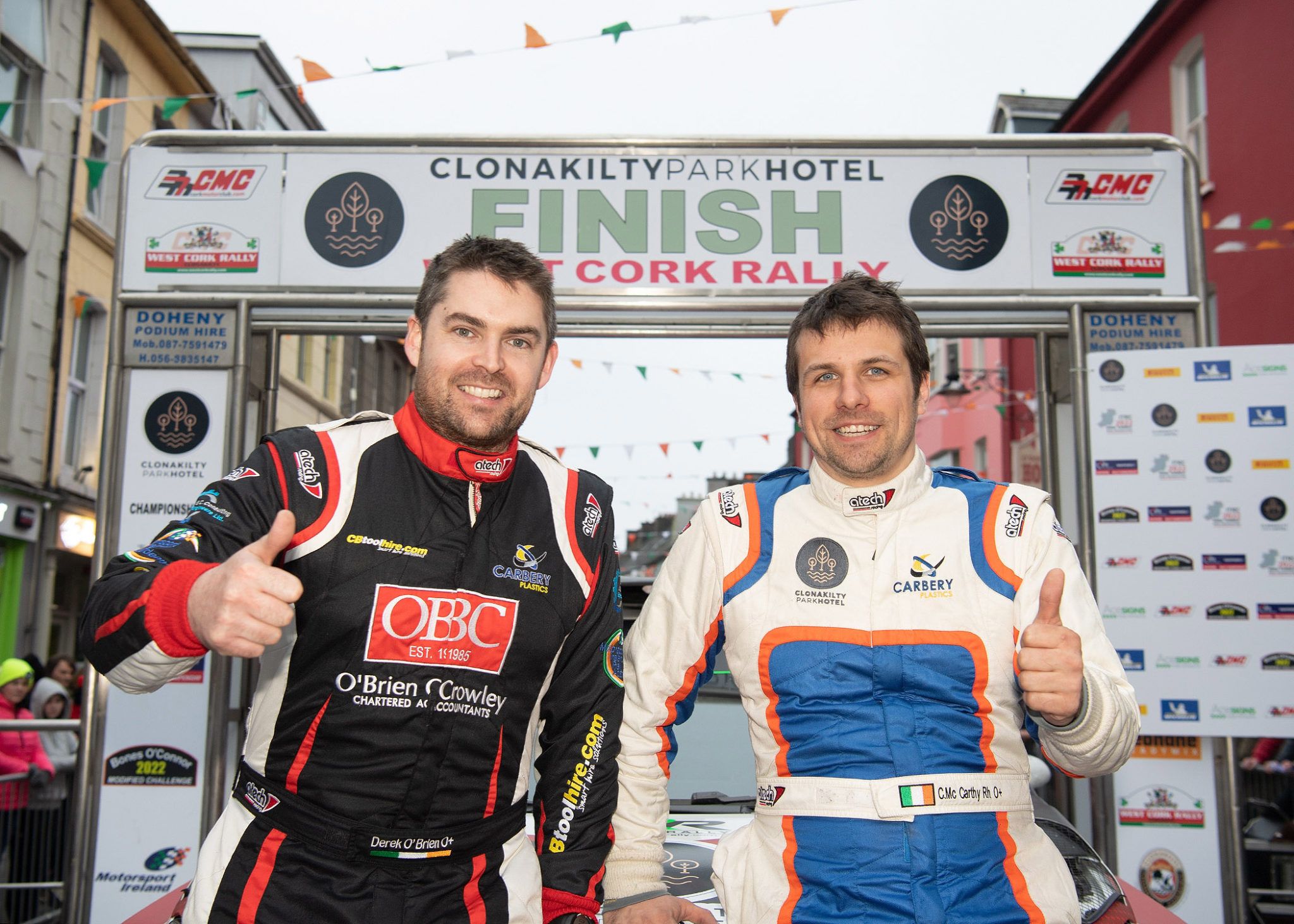 However, Moffett’s tenure at the top was short as Devine reclaimed the lead by a fraction of a second on the penultimate stage and ended the day 4.4 seconds in front of Moffett, who had a soft brake pedal for the closing pair of stages. Having made an unusually slow start, Evans picked up his space to move into third, 17.4 seconds off second spot and just 2.9 seconds ahead of Fisher, who topped the time sheets through SS 7. Showing the fine form on the opening stage, McCourt was best through SS 8 to end the day in fifth as sixth-placed Greer damaged the sump guard following a heavy landing over a jump on SS 6.

There was drama for Cronin when his VW Polo slid at high speed. Luckily, he managed to get away without any damage; he held seventh. Murphy and Guest continued the unbroken sequence even though the Ovens driver continued to see how far he could push his mount. Guest was thwarted by some brake issues and spun on the Sam’s Cross stage.

Meanwhile, Cal McCarthy (Citroen C3) continued to learn the vagaries of the Citroen C3 and held 16th overnight – he lost time when he stalled at the start of Ardfield. In Class 24 (right-hand drive R5 cars) Clonakilty’s Kevin Kelleher (Fiesta R5) was 18.3 seconds ahead of the similar car of Dunmanway’s Jason McSweeney.

Sunday’s itinerary featured a double run over the trio of stages at Ring, Clogagh and Ballinascarthy. McCourt became the first casualty when he rolled his Fiesta R5 just prior to Moloney Strand. It appears that the rear of his Fiesta R5 stepped out, clipped a stone and flipped over. McCourt and co-driver Liam Moynihan were uninjured. The crews that were held up by the accident were awarded Fisher’s time.

Evans was best through Clogagh and, suddenly, the event was a three-way tussle with Moffett back in front for a second time, albeit by a fraction of a second (0.2) with third-placed Evans just eight seconds behind Devine. 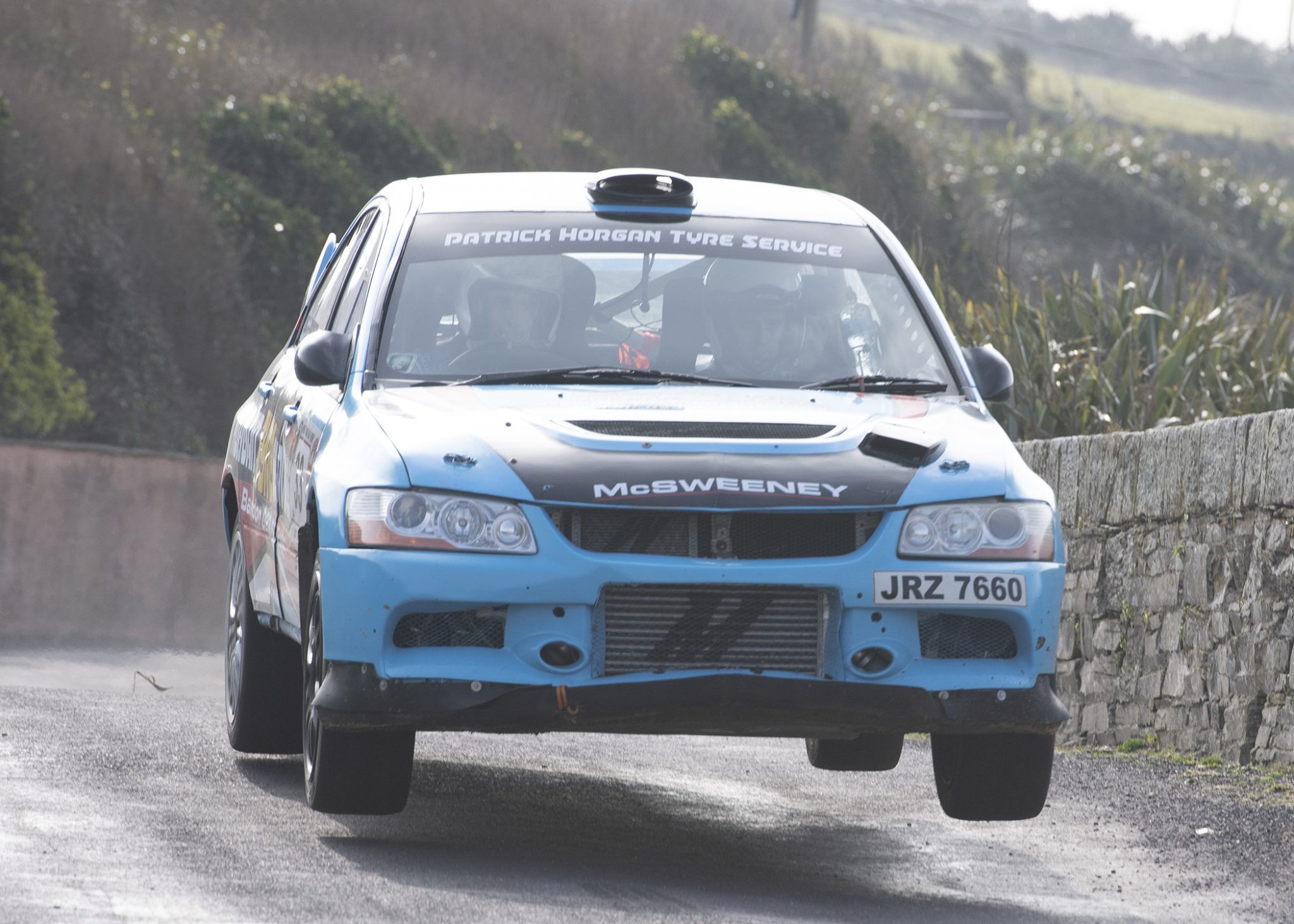 On SS 11, Ballinascarthy, Moffett pushed hard. He extended his lead to 7.3 seconds ahead even though he experienced a moment on the stage, the latter part of which was covered in dust from a hard-pressing Devine, who had selected a soft compound tyre that lost its efficacy. Evans stalled at a hairpin and dropped 22.3 seconds off top spot. Having impressed on Ring, Fisher lost time with two overshoots and a spin on Clogagh with Greer inching into fourth.

Meanwhile, Cronin, who lost power steering and had an overshoot on SS 11, began to put daylight (38.8 seconds) between himself and Murphy, who spun on SS 11 with Guest 1.7 seconds further back in eight. McCarthy was on the fringes of the top ten.

On the way to the final loop, Devine’s run came to an abrupt end when his Fiesta developed gearbox issues and he was forced to retire, an episode reflecting the sometimes cruel and fickle nature of the sport.

Moffett went on to claim the honours with Evans completing a repetition of the Galway Rally 1-2 sequence. The drama continued on the final stage when Greer endured a visit to the local scenery that damaged the exhaust and led to his retirement. Fisher went on to claim third followed by the local trio of Cronin, Guest and Murphy. McCarthy (Citroen C3) made it into the top ten to finish eighth and achieve his pre-event target.