The Dubs are now reigning All-Ireland and league champions, and in both finals they beat Cork.

Hannah Tyrrell produced a star performance for Dublin here. A former Ireland rugby international, Tyrrell contributed 0-7 and captain Sinead Aherne added another five as the Sky Blues marched towards another national title under the guidance of Mick Bohan.

The opening moments of this showpiece decider was dominated by free-taking, with Aherne and Cork counterpart Orla Finn registering 0-2 apiece off placed-balls.

Aherne and former Republic of Ireland soccer international Siobhan Killeen chipped in with points from play, but 12-time League winners Cork stormed back in front when corner-forward Libby Coppinger palmed to the net after ten minutes following a lovely move. 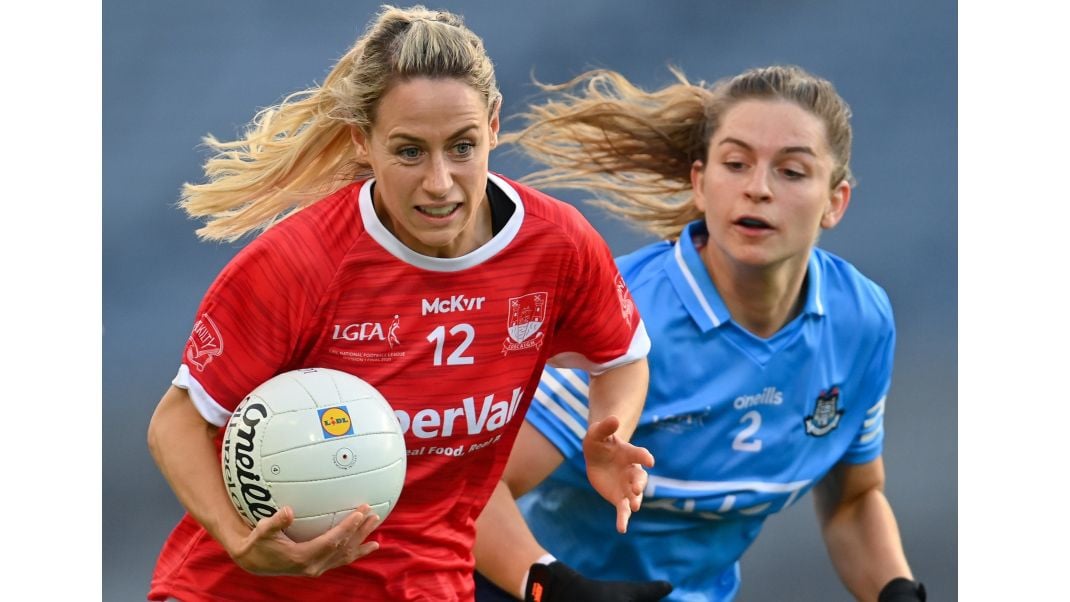 Cork forward Orla Finn gets away from Martha Byrne of Dublin during the Lidl Ladies Football National League Division 1 Final.

Following the first half water break, a brace of Tyrrell points for Dublin were cancelled out by a similar salvo from Finn. Hetherton had a second goal ruled out for a square ball, but unanswered points courtesy of Jennifer Dunne and Tyrrell (two) gave Dublin a 1-10 to 1-6 half-time cushion.

While Cork reduced the gap through a Finn free when the action resumed, Dublin threatened to pull away with points from Aherne and Lyndsey Davey. Finn’s sixth of the day coincided with the sin-binning of Sky Blues corner-back Martha Byrne, and this presented the Munster side with a potential lifeline.

Yet, despite their numerical deficiency, Dublin grew in stature. Tyrrell and Aherne enhanced their tallies with additional points and while Eimear Scally curled between the posts for Cork, the returning Carla Rowe fired to the Cork net in the 50th minute to effectively place the outcome beyond doubt.

Yellow cards for Lauren Magee and Máire O’Callaghan ensured both teams finished the game with 14 players, and with Ciara O’Sullivan, Coppinger and Finn firing over late points, Cork did at least end the proceedings in commendable fashion.