THE US GAA club that has launched its new jersey which features an image of Michael Collins has very strong links to West Cork.

‘Michael Collins is one of Ireland’s most iconic historical figures and compared to other leaders of that era he does not have many GAA grounds or clubs named after him, despite having a GAA background.

‘With many of our members from West Cork we felt it would be a nice tribute to honour one of the great figures of that area on the 100-year anniversary of his death.’

The new eye-catching jersey comes in two colours – in the traditional red and white of Cork with Collins emblazoned across the front and also a light grey version, with ‘The Big Fella, 1890 to 1922’ written on the back of both. It is already a lucky charm for Cork Boston. Wearing it for the first time, they beat Connemara Gaels by a single point in their recent junior A championship match.

The club is one of the oldest in Boston, having been founded in 1890, which David Joyce notes is the same year that Michael Collins was born. Cork Boston GAA has a strong connection to West Cork, with five previous club chairmen from the area – Johnny McCarthy (Caheragh), Declan Cronin (Durrus), Brian Crowley (Adrigole), Joe Regan (Aughadown) and Mike Cadogan (Baltimore). Joyce explains the link to West Cork is still there.

‘Tadhg Lucey (Skibbereen) is a stalwart of the club while Mick Lynch and Declan O'Shea are both past players from Bantry. Our current vice-chairman and player Dan O'Regan is from Drinagh and our treasurer Sean Kelly comes from Skibbereen as well,’ he explains.

‘Further back the Fleming brothers (Mike, Richie, Brendan) from Barryroe, Mike Moxley (Clonakilty) and Dermot Murphy (Kilmichael) gave a lot of service to the club.’ 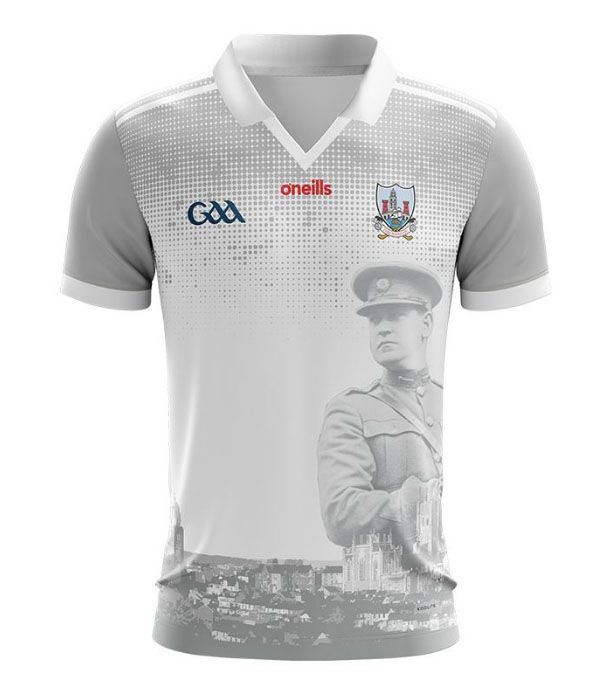 There is also a grey version of the jersey.

Joyce added: ‘On May 1st we honoured Pat Sheehy and Fr Dan Finn (Kanturk) as part of our annual club dinner here. Pat is from Ilen Rovers and alongside Richie Fleming and Terry O’Neill (RIP) formed the management team that won the Boston championship in 1988. Pat returned to Ireland and was a driving force behind llen Rovers winning their first Cork junior A championship in 1996, and was also the coach to the Carbery team that reached the county final in 1997.’

Cork Boston GFC has over 30 registered players living there and the club will be bolstered by another ten J1 visitors this summer. The club has previously won the Boston and North American senior football championships.

‘In more recent times we have enjoyed success, winning the junior A championships in 2017 and 2018 and the intermediate championship in 2019,’ Joyce added, and the hope is their new Michael Collins’ jersey can inspire even more success this season.