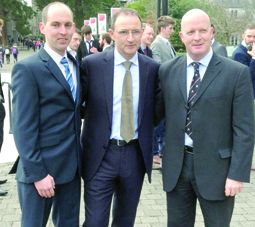 UCC were the only non-Airtricity League club left in the competition, underlining the massive strides made by the college over the past number of seasons under the tutelage of Noel Healy and his coaching team, which includes former West Cork Schoolboys’ Kennedy Cup coach Conor Uhl.

Current undefeated Airtricity League of Ireland pacesetters and defending champions Dundalk proved too strong for UCC at the Mardyke on Monday evening in front of an appreciative crowd.

Despite the final score, Uhl was immensely proud of UCC’s efforts.

‘Even though we came up short against Dundalk it is worth remembering our team has been punching above its weight in the competition and was the only non-Airtricity League club left in the quarter-finals,’ commented Uhl to The Southern Star.

‘The lads deserved to be in the last eight having overcome two very good sides in Wexford Youths and Cobh Ramblers in the previous rounds. They can be immensely proud of what they have achieved and especially how far they progressed in this particular competition.

‘This current Dundalk team is the barometer by which every other League of Ireland club and the likes of UCC should measure themselves against. You have to take your hat off to Dundalk who were just the better team on the night. They are a class side but we worked hard throughout and I couldn’t ask any more of our players’.

The former West Cork League player made a name for himself as a striker in Ardfield AFC’s colours both at underage and junior level before transitioning into a coaching role with the West Cork Schoolboys’ League Kennedy Cup squad.

Current Cork City manager and fellow West Cork resident John Caulfield was well aware of Uhl’s abilities and invited the Ardfield clubman to help him out with the WCSL Kennedy Cup team.

Uhl would eventually take over once Caulfield moved on and played a key role in enhancing West Cork schoolboys’ football’s reputation over the next five years.

Caulfield made a call to Uhl back in 2010 not long after taking over the managerial reins at Munster Senior League side UCC and the 29-year old jumped at the chance to work with the college’s experienced coaching staff.

Since then Uhl’s career has continued its upward curve. Working with manager Noel Healy, the former Ardfield clubman has helped deliver multiple trophies over the past number of seasons.

‘UCC were a team hovering between mid-table and the bottom places in the Munster Senior League before John (Caulfield), Noel (Healy) and I got involved,’ commented Uhl.

‘It took a couple of years to turn things around and instil a winning mentality within the club. We won a couple of Collingwood Cup trophies, which built confidence, before claiming the Munster Senior League title last year.

‘More than anything, we have successfully changed the attitude within the club. Players want to sign for UCC now whereas in the past they may not have considered us worth signing for when pursuing honours. UCC is attracting League of Ireland players from clubs like Cobh Ramblers who want to sign and win things with us which is fantastic.’

Conor and the coaching team have put in countless hours and dedicated work behind the scenes to transform UCC to the point where they are challenging Dundalk in League of Ireland knockout competitions.

We’ll leave the last word to the former WCSL and Ardfield coach as Conor Uhl is a name you are going to be hearing a lot about in the coming years.

‘Occasions like Monday evening are terrific for everyone involved with UCC but only come about having reaped the benefits of all our hard work over the past number of years,’ Conor said.

‘I will continue to work hard and strive to bring more League of Ireland teams back to Mardyke in the near future.’