A PROPENSITY for falling off his motorcycle and ending up in hospital was the unlikely catalyst that led to Clonakilty’s Kevin Kelleher getting involved in rallying at the beginning of the millennium.

Within a decade, the blonde-haired effervescent Kelleher had made a mark, courtesy of a unique Irish rallying double – winning the Group N categories of the Irish Tarmac (2008) and the Irish National Rally championships (2009) with his brother Martin at his side.

He also finished runner-up to Gareth MacHale in the 2005 Billy Coleman Young Driver of the Year award and won the popular Garda Síochána Motor Club’s Rally in Baltinglass.

It was a strange beginning, he admits.

‘I had quite a few accidents on the motorbike,’ Kelleher said.

‘My mum (Mary) was sitting beside me in the CUH and my leg was hoisted up to the ceiling and she asked, “Kevin, what would it take to get you away from the bike?” I answered briefly, “Mam, I’m mad for speed”. She said the motorbikes will be the death of me as this was her third time in hospital with me. She asked me, “Would you buy a racing car?”

‘I told her I had no interest in cars. She even offered to pay the deposit for me to get a car to do the West Cork Rally. I told her I would think about it.’

Time was something that Kelleher had on his side as he spent about nine months on crutches. That was how it all began, at the 2000 West Cork Rally in a Toyota Corolla with Barryroe’s Kevin O’Driscoll as co-driver.

Throughout the years – and he’s not finished yet – Kelleher has had almost 20 different co-drivers but his brother Martin was there for the majority of the time.

‘He was a steadying influence on me in the car and wasn’t for taking the big risks. He was always good to pull me in,’ Kelleher said.

Following his rally debut on the West Cork he campaigned the Toyota Corolla that he purchased from Killarney’s Kieran Marshall for about a year and a half.

‘I wrote it off on the ALMC Rally in 2001,’ he explained, and he subsequently purchased a Mk. 2 Escort from Carlow’s Trevor Culbert. With his brother Martin calling the notes, they took a Class 11 victory in the National Rally Championship. They also won the popular Mk. 2 Challenge at the 2005 Carlow Rally, but that was only a fleeting outing in the Blue Oval as in late 2004 Kelleher had bought an ex-Natalie Barrett left-hand drive Mitsubishi Evo VI, an ex-works car.

‘It was my first foray into left-hand drive but when we were leaving parc ferme for the start of the Clare Rally the engine seized,’ he recalled. The same season Kelleher did manage to get out and compete in the Cork ‘20’ and the Fastnet Rally.

‘I never really felt comfortable in it and over the winter we did a deal for a Mitsubishi Evo VIII, a brand new car,’ he said. 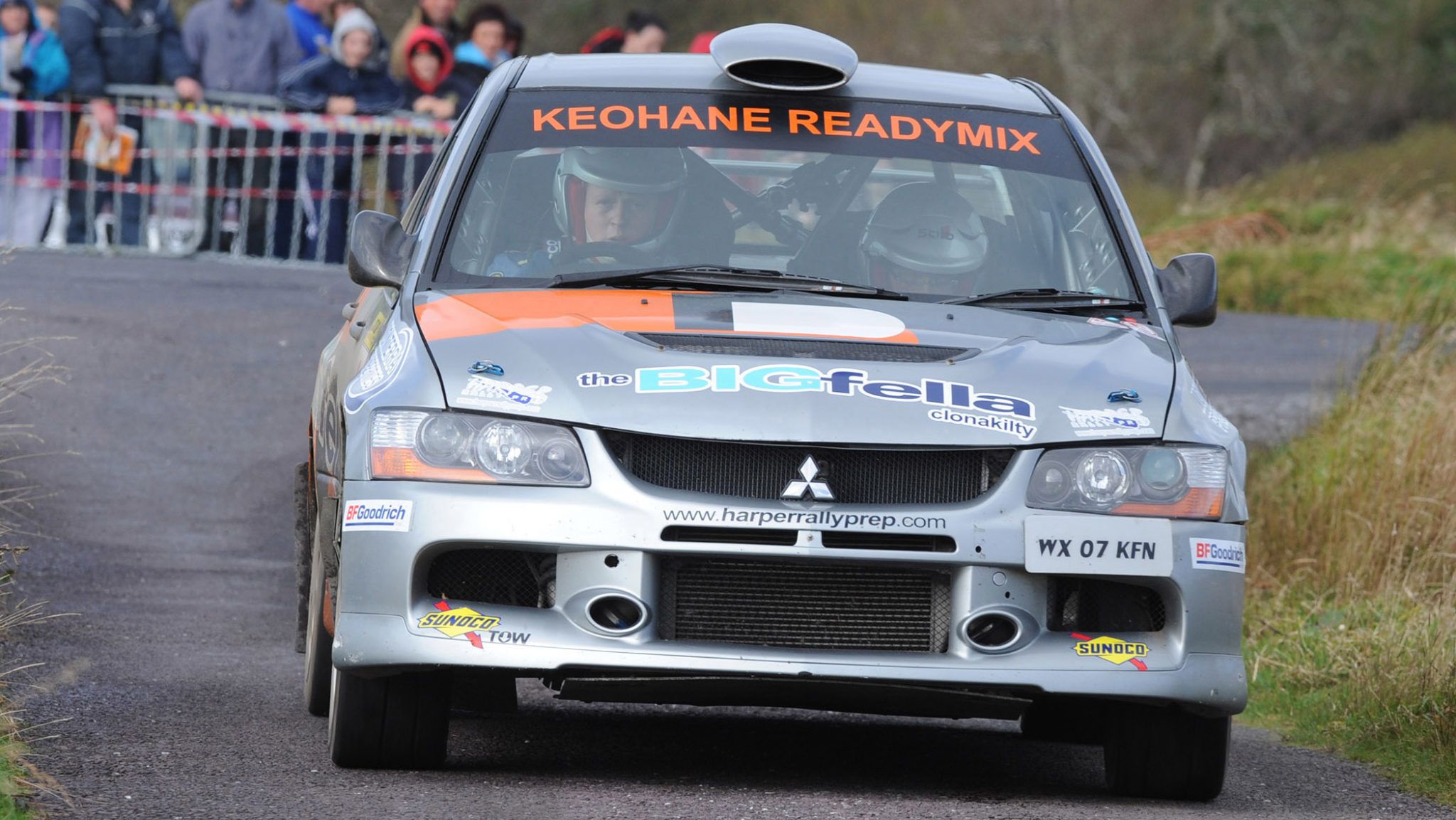 Like many more, the only real way to gain experience was to compete in events.

‘We did a lot of rallying in 2006, it was all about getting seat time. I knew the car was capable but I needed seat time to get to know the bravery of it,’ Kelleher explained.

It augured well with sixth overall in the Mayo Rally and the West Cork, the latter including a Class 4 win. There was also a class win on the Circuit of Kerry where they finished ninth overall. From the confidence that those events engendered, the outlook was promising but there was an abrupt halt on the Circuit of Munster.

‘We hit a concrete wall and both myself and Martin ended up in hospital. That accident knocked me back an awful lot and the car was destroyed,’ he said.

Down but not out, he secured a new body shell and transferred all the running gear and the Kelleher brothers were back rallying within a few weeks. One of their great rivals, Seamus Leonard, had taken delivery of an ADR works built Mitsubishi Evo IX and after a brief chat at the 2007 Donegal Rally, Kelleher was given first refusal on the car if and when Leonard decided to sell. A few months later the deal was sealed after the Clare Rally and Kelleher gave the car its debut at the Cork ‘20’.

Whether at Tarmac or National Championship level, the Group N category was always hotly contested. For instance, in the 2008 Tarmac series there were 31 Group N cars for the opening round in Galway. That season, the who’s who of Group N included Garry Jennings, Roy White, Thomas Fitzmaurice, James Foley, Colm Murphy, Alan Ring, Owen Murphy and Dick Curran, and Kelleher took the Tarmac championship showroom category crown.

But the strain of the Tarmac series with events in Scotland and the Isle of Man meant a lot of time away from Clonakilty. Not surprisingly, a title defence didn’t follow but there was more than an ample substitute in the shape of the National Rally Championship.

The notable double was achieved, secured on the Skibbereen-based Fastnet Rally, but not before the West Cork duo had beaten Jennings in the Donegal Harvest a few weeks previous.

But the storm clouds for this popular class were beginning to loom with the formation of a new category (Class 20), Class 4 began to fade within a few years. Kelleher, like many more, knows exactly what led to the demise of the once great Class 4.

‘It was very competitive and affordable but then Class 20 came in and fellas switched to sequential gearbox, different turbos, bigger suspension, bigger brakes. It was a reckless decision (to allow these changes). You now had WRC type of costs in an Evo,’ Kelleher pointed out.

With little or no competition anymore, Kelleher changed to Class 20 in 2011.

‘On the dyno, the car had 348bhp, it was ridiculous,’ he said, and to illustrate his point he added, ‘We did 26 rallies in the silver ADR car, we won the class (Class 4) 18 times, the car only stopped once and that was on the Isle of Man with a broken clutch. After we switched to Class 20, the car only finished six out of 18 rallies, the reliability suffered and the costs trebled.’

Kelleher is of the opinion that there will be little or no rallying this year, and he has concerns for the next generation of rally drivers.

‘There is really no beginners class anymore. Cars are too expensive. Years ago we had the likes of the Ford Kas and the Citroen C2s. Why not a standard Ford Fiesta, a 1.2 petrol Zetec engine and no modifications, it would be a great breeding ground.’

Kelleher made his final outing in a Mitsubishi in early 2012 before switching to a Subaru WRC, but that’s for another day.