In a repeat of the 2020 and 2021 Beamish Cup deciders, Clon gained revenge for their previous cup final losses by knocking out three-in-a-row chasing Dunmanway Town at the Baltimore Road ground last Sunday.

‘It is great to get back to another Beamish Cup final again,’ Clonakilty manager John ‘Mousey’ Leahy said.

‘It has taken three years and reaching these Beamish Cup finals to realise our potential. Dunmanway Town have been worthy champions too; I mean, Mark Buckley hit the post in the last minute. We have an unbelievable squad and the camaraderie is unbelievable.

‘We have injuries to deal with before the final but we don’t want to be known as the Buffalo Bills (NFL franchise that lost four Super Bowls between 1991 and ’94) of the Beamish Cup!’

Clonakilty got off to the best possible start with a goal inside two minutes. Jonathan Leahy whipped a corner into the Dunmanway penalty area where Liam Anthony White pounced to make it 1-0. 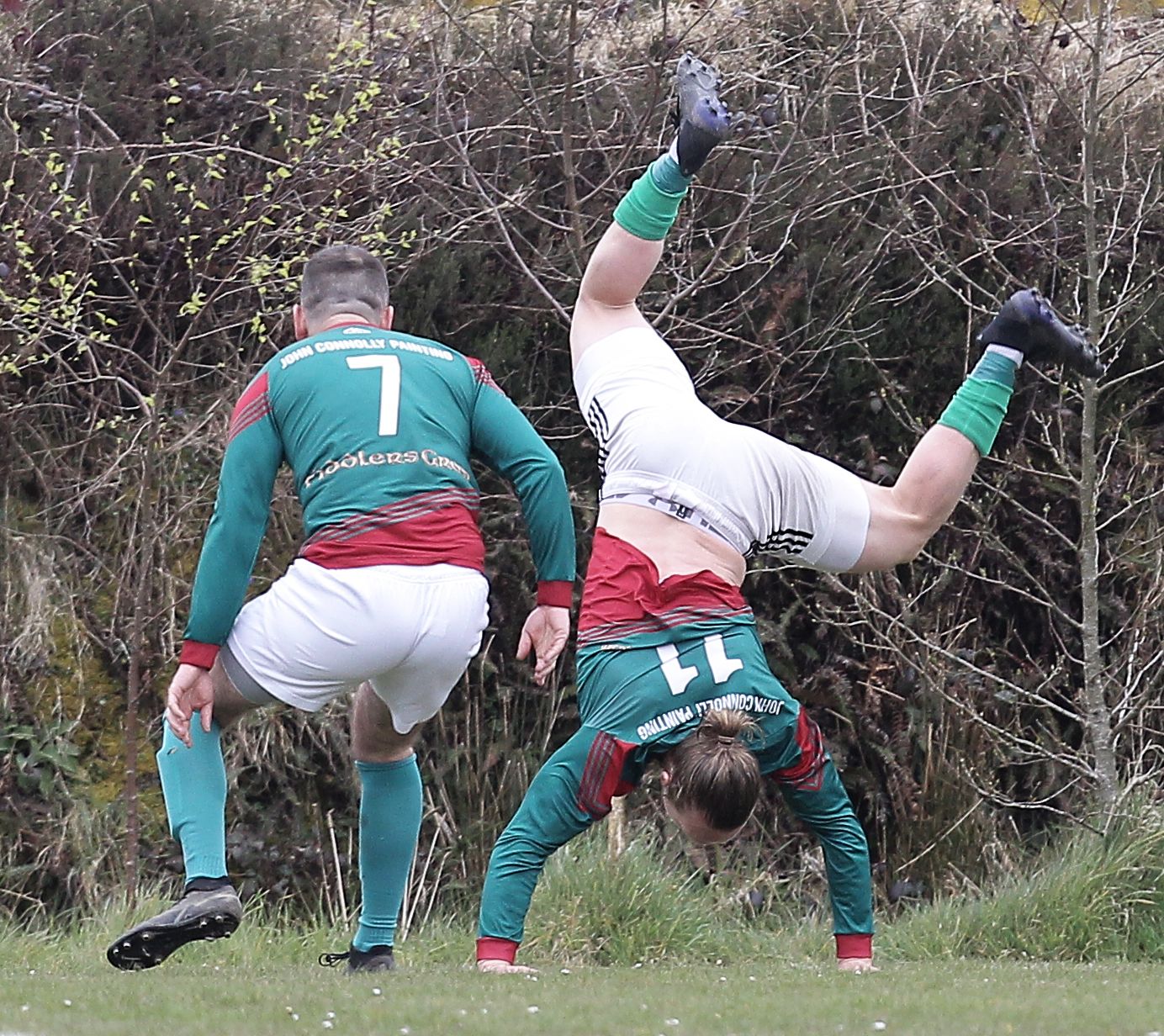 The cup holders were shaken by the concession of that early strike and needed goalkeeper Stephen Daly to prevent a Leahy free-kick from nestling in the back of the net soon after. Iain O’Driscoll had a goal ruled out for offside before Dunmanway finally got to grips with the tie.

Town enjoyed a sustained period of possession and levelled matters courtesy of some poor Clonakilty defending. A wayward back pass forced goalkeeper Seamus O’Brien to leave his area and concede a throw-in. Clon’s failure to clear the ensuing danger resulted in Cathal Daly curling a marvellous shot into the bottom corner.

The pace of a superb cup semi-final remained unrelenting as Clonakilty Soccer Club needed just two minutes to restore their advantage. This time it was Dunmanway who were punished for hesitant defending and their failure to clear another corner kick. An unmarked Conor McKahey was allowed time and space to wallop an acrobatic volley into the top corner.

The crowd had little time to catch their breath before Dunmanway equalised for a second time just shy of the half-hour mark. Keith White’s pace saw the Dunmanway winger burst into the penalty box prior to placing a precise finish beyond Seamus O’Brien. That was the end of the first-half scoring as a strengthening wind made playing conditions increasingly difficult. 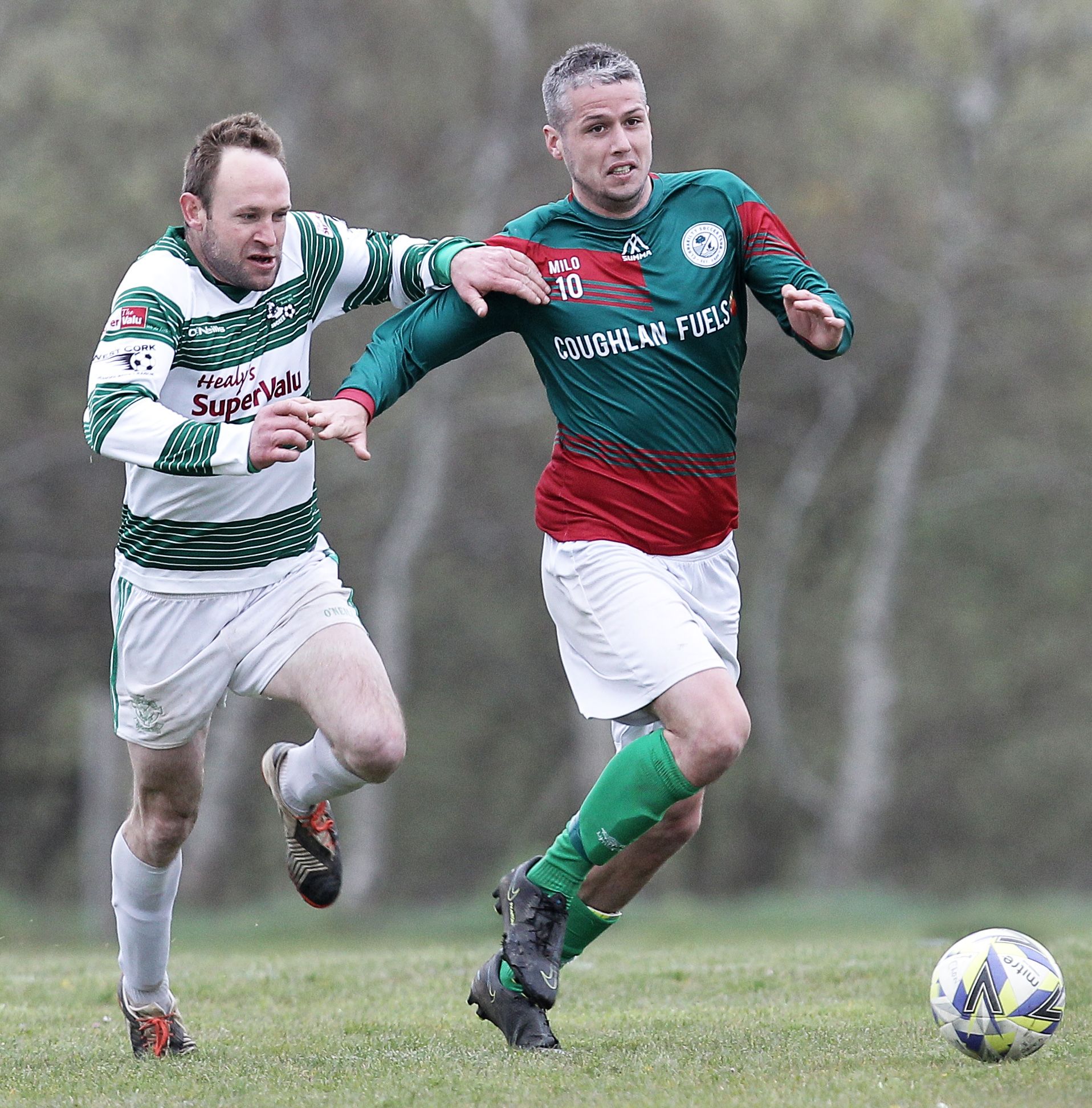 Clonakilty's Jonathan Leahy tries to get away from Dunmanway Town's Patrick McCarthy.

Town forced a series of corners during the early exchanges of the second period. Reuben Henry and Shane Buttimer were in excellent form in the heart of Clon’s defence however, and helped see out a difficult spell. Clon were forced into defensive mode for much of the second half and struggled to get anything going in the final third. That’s what made Clonakilty’s third goal all the more surprising when it arrived against the run of play after 66 minutes.

Eoin Ryan was brought down wide on the right. Jonathan Leahy’s pin-point delivery from the ensuing free was headed in by Iain O’Driscoll. 3-2 to Clonakilty with less than half an hour to go.

Stephen Daly did well to gather a Shane Buttimer effort after 70 minutes and that was Dunmanway’s cue to up the tempo in an attempt to conjure up a third equaliser. Peppering Clon’s goalmouth with a succession of free-kicks and corners, Dunmanway went close when Seamus O’Brien was forced to tip a Rhys Coakley piledriver over the crossbar after 82 minutes. 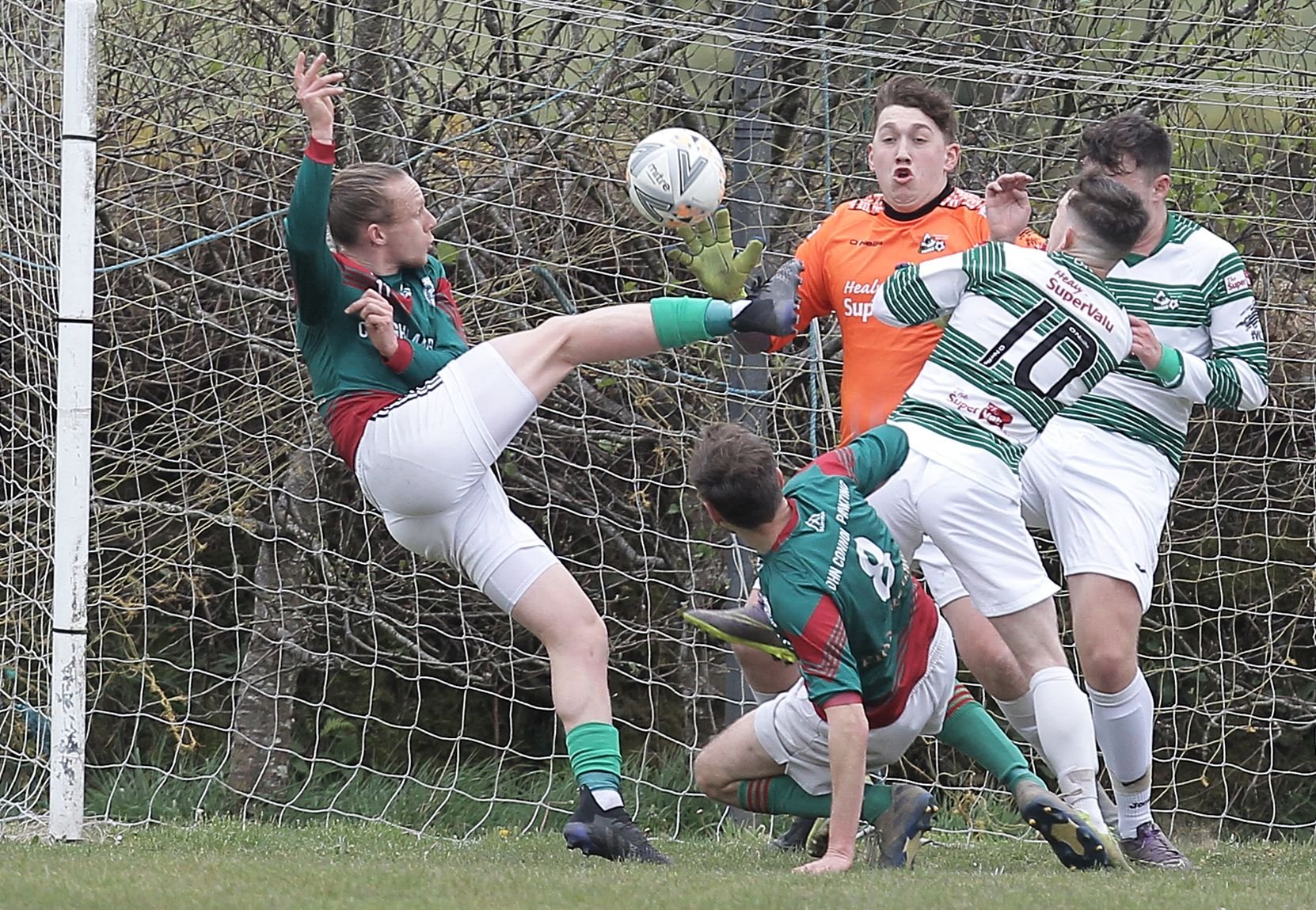 Clonakilty's Conor McKahey fires the ball to the Dunmanway Town's net for his side's second goal in the Beamish Cup semi-final.

Camped in the Clonakilty half, the Beamish Cup holders’ Mark Buckley came off the bench to rattle the woodwork six minutes into 11 additional minutes of injury-time that were played. It was Dunmanway’s last chance but not enough to prevent Clonakilty Soccer Club from setting up an intriguing showdown with neighbours Lyre Rovers in this year’s Beamish Cup final.

‘Lyre will be out to win the Beamish Cup just as much as we will,’ John Leahy added.

‘The best team on the day will win it. Reaching a third Beamish Cup (final) is a massive boost for our club. We are still in the Premier Division title-race and no Clonakilty club has ever won that.’