Evasive action: Castlehaven's Darragh Cahalane tries to get past Bandon's James McSweeney during the Clona Milk U21 A football championship quarter-final at Clonakilty on Saturday. 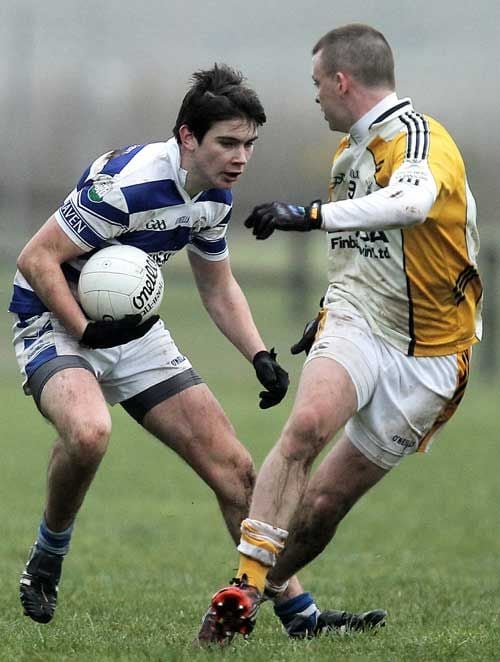 Evasive action: Castlehaven's Darragh Cahalane tries to get past Bandon's James McSweeney during the Clona Milk U21 A football championship quarter-final at Clonakilty on Saturday.

REIGNING South West U21 A football champions Clonakilty will face Newcestown in a semi-final of this year’s competition following their respective quarter-final wins last weekend.

Newcestown saw off Bantry Blues, 0-7 to 0-6, on Friday night in Dunmanway, thanks to Greg Murphy’s heroics and points from Colm Dineen (3), Luke Meade, Sean O’Donovan, Jack O’Toole and Conor O’Neill.

Newcestown led 0-6 to 0-4 at the break and withstood fierce Bantry pressure before Conor O’Neill’s late winner.

Meanwhile, Clonakilty were made to work hard in their quarter-final against Carbery Rangers on Saturday night in Castlehaven, coming from 1-6 to 0-6 down at half-time to win 1-9 to 1-7.

Ian Falvey, who kicked 1-3, scored an early second-half goal that helped Clon eke out a narrow win, but this game could have swung either way.

In keeping with the tight nature of the U21 A games last weekend, Castlehaven were pushed all the way by Bandon, before winning 2-11 to 1-10 in Clonakilty on Saturday.

The Haven led 1-7 to 1-2 at half time – Michael Hurley goaling for the winners, Adam Murphy for Bandon – and led 1-10 to 1-3 at the three-quarter mark, but Bandon rallied well in the second half, before Conor Cahalane’s late goal decided the contest.

Castlehaven await the winners of next weekend’s quarter-final between Ilen Rovers and Dohenys.

Don’t miss this Thursday’s Southern Star for reports and reaction from all SW U21 A games.