Follow my lead: Clare captain Gary Brennan was man of the match in the last Munster semi-final meeting between Clare and Cork back in 2013. 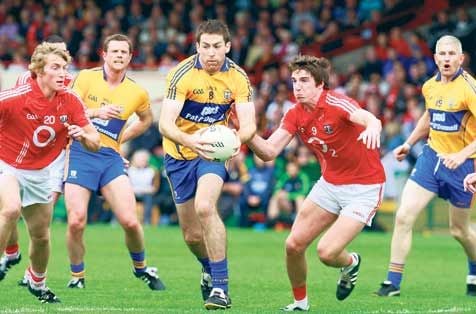 Follow my lead: Clare captain Gary Brennan was man of the match in the last Munster semi-final meeting between Clare and Cork back in 2013.

Three meetings in successive years from 2011 — three victories for the Rebels and all together by a cumulative tally of 36 points. In ’11 and ’12 the defeats were by 15 and 12 points respectively before Clare got it back to single figures in ’13 when there were nine points between the sides.

Has the gap narrowed further in two years?

Gary Brennan certainly believes so and it’s why he thinks this Clare team are not just making the journey to Páirc Uí Rinn in hope, but in a gathering confidence on the back of the progress that has been made over the past two seasons.

‘We’re not going to spend too much time thinking about Cork,’ says the 27-year-old.

‘We’re going to look after ourselves and our own performance. We know they’re a strong team and played very well in Division 1 all year, but we’re not going to go down and hand them the game before it’s started.

‘We have to be aware of what Cork have been doing all year, but we’ll worry about getting our performance right and we’re not going to have the game won for them before we go down. We’ll be doing everything we can to get into the best shape possible to give us the best chance of getting a result,’ he adds.

And that’s just what Brennan is looking for — a result that means the team he’s captained for the past three years finally standing up and making a real statement for this Clare inter-county generation.

‘We pushed them two years ago,’ recalls Brennan of the 2013 Munster semi-final, ‘but that day is gone. Pushing teams is one thing, we want to go out and try and get results out of these games too.

‘We’ll be looking to get ourselves in a position where we can compete for that game in the last 15 minutes — whatever that takes we’ll have to do that. We’re going to go down there and represent the jersey as best we can and hopefully that will be enough to get the result for us.

‘We played some brilliant football at times in that Limerick game — we didn’t finish it out in a way that we would have liked to but we have to credit Limerick for the way they came back into it and the way they battled.

‘I think there’s definitely more in us from that Limerick performance and hopefully we’ll get that out of ourselves on Sunday. If we can maintain our intensity that we showed in the first half for longer stretches of the game it will give us a great chance,’ he adds.

‘We’re going out to win the match,’ continues Brennan emphatically.

‘There’s no two ways about it — we’re going out to win the game. I’ve never gone out in a Clare jersey not believing we could win a match.’