In atrocious weather conditions Town's Gary Murphy gets ahead of his Na Piarsaigh marker during their Cork PIFC opener.

CASTLETOWNBERE cruised to a comfortable win against Na Piarsaigh in this Bons Secours Premier IFC first-round game played in Aughaville.

The Magpies, who led from start to finish, were full value for their victory following an assured performance against their city opponents, who lacked the offensive nous to overcome the Beara outfit.

Castletownbere made light of the inclement weather conditions with a dominant display which ensured they got their Group B campaign off to a bright start.

Their victory was largely inspired by a resolute defence, while their work ethic in all sectors of the pitch was admirable.

Skilful forward Gary Murphy demonstrated his class, once again, with a fine display. He was ably supported by James Harrington. Former Cork midfielder Andrew O’Sullivan formed an effective partnership with Oliver Byrne, while Declan Dunne and Trevor Collins impressed greatly at full and centre back respectively.

Na Piarsaigh controlled possession for long periods, but they were bereft of ideas from an attacking perspective. They only scored one point in the second half as Castletownbere cantered to victory.

Castletownbere, who played with the aid of the strong breeze in the opening half, started brightly as they raced into a four-point lead inside 15 minutes. Gary Murphy with a brace, James Harrington and Andrew O’Sullivan were all on target as they surged into a deserved lead.

Na Piarsaigh were ponderous in possession and found it hard to penetrate a well-organised Magpies defence. They opened their scoring account in the 18th minute through centre forward Alan Hogan.

The response from Castletownbere was emphatic, however, as two successive points from Jonathan Rosales and James Harrington moved them five points clear after 24 minutes. Na Piarsaigh were growing into the game and points from Keith Buckley and Alan Hogan reduced the deficit to three points after 31 minutes.

Castletownbere added the final score of the first half following a Gary Murphy free which restored his side's four-point lead at half time, 0-7 to 0-3.

The quality of the game, understandably, decreased in the second half as the conditions worsened. 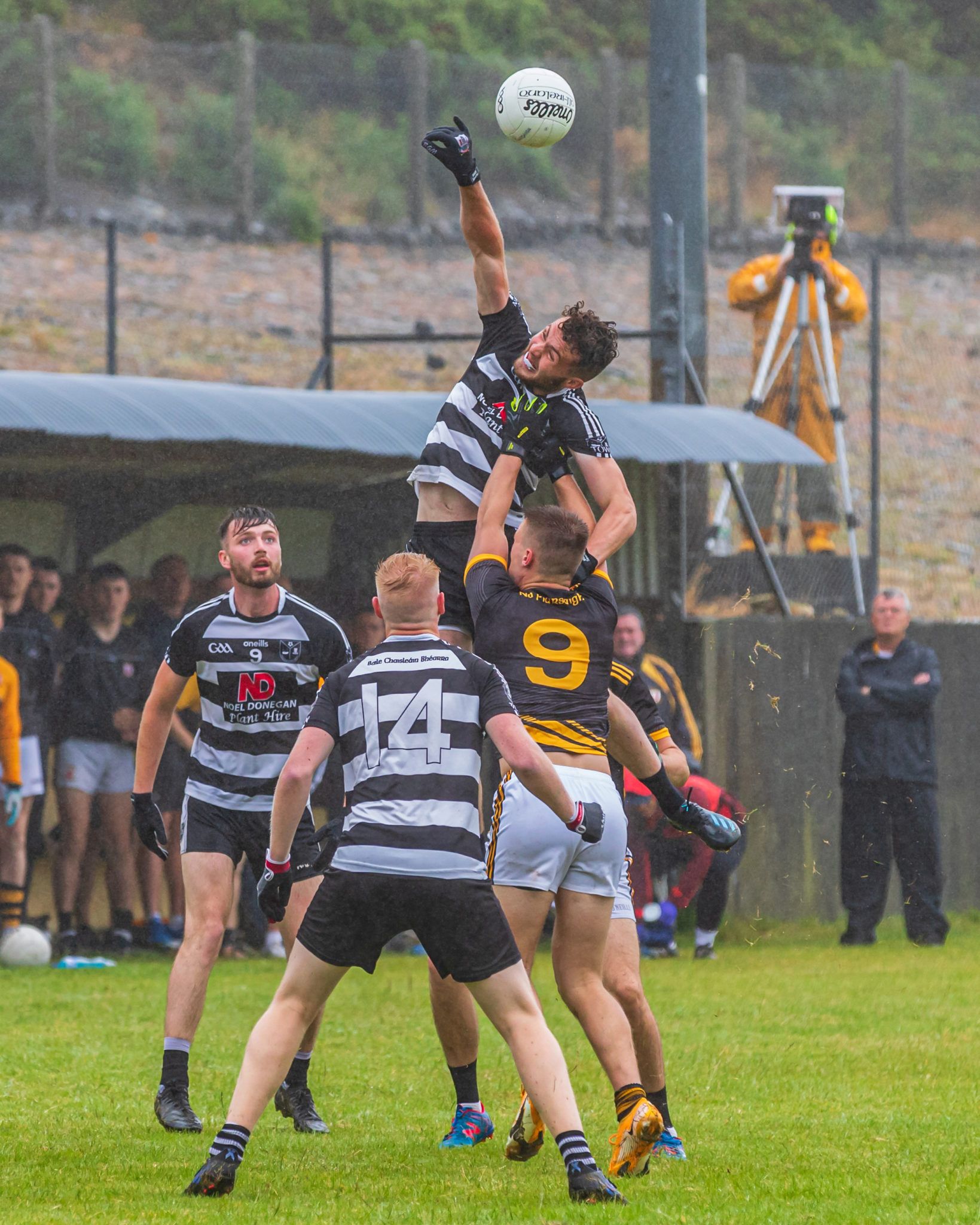 Castletownbere's Fintan Fenner up for the ball ahead of Na Piarsaigh's Caoimhín O Muimneachain during their clash. (Photo: Anne Marie Cronin)

Tomas Murphy opened the scoring in the second half for Castletownbere in the 38th minute, before impressive defender Jonathan Rosales scored his second point of the game in the 48th minute which moved his side six points clear.

Gary Murphy recorded the score of the game in the 51st minute following a brilliant run and strike, which moved the Magpies into a commanding seven-point lead.

Na Piarsaigh added a late consolation point but they will need to improve considerably for their next game against Aghada.

Attention for Castletownbere now turns to a derby encounter against Bantry Blues in Adrigole on August 13th.