Síle Burns with her parents Denis and Phil 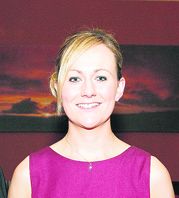 One to watch: Sile Burns will be a key player for the Carbery senior camogie team in the county championship.

HAZEL O’Regan is confident that Carbery can leave their mark on this season’s county senior camogie championship.

Carbery are among the four divisional sides that have returned to this year’s senior championship which throws in this weekend. Carrigdhoun, Imokilly and Seandún are the other three, to join the 12 clubs, as Milford’s crown is put on the line – the North Cork club is bidding for the three-in-a-row.

The last time Carbery competed in this competition was in 2012 when they lost to Carrigdhoun after facing Seandún in the opening round, and first up this year is a tough game against Killeagh next Monday, June 29th, at Castle Road in Cork city.

‘The standard of camogie in Carbery is very high at the moment with a lot of West Cork clubs having enjoyed success at underage and minor levels, and young camogie players from the west wearing the Cork jersey at U16 and minor levels. This can only be good for Carbery camogie,’ O’Regan said.

‘Being back in the senior championship is a huge boost for Carbery camogie especially at a time where West Cork clubs are making great advances at underage level.’

Among the recent successes was that of the senior team at Sacred Heart Secondary School, Clonakilty that went all the way to an All-Ireland C colleges’ final, and if Carbery can tap into this pool of talent the future looks bright.

A teacher at Ballinora National School, O’Regan and Carbery are preparing for a testing encounter against Killeagh when West and East collide.

‘Killeagh are a young, energetic and strong side. Brian Barry is a really good trainer and they have Cork stars Laura Tracey and Hannah Looney, who will be the ones to watch on the night. It would be a massive achievement if we beat them,’ explained O’Regan, who is also lining out with the Cork intermediate camogie team that is in championship action against Meath on July 4th.

The Carbery team is made up of players from Clonakilty, Barryroe, Newcestown, Kilbrittain/Timoleague, Ballinascarthy and Enniskeane – those clubs in Carbery that don’t compete at the senior level.

There is a back-door in the competition for the teams that lose in round one.

Having been part of the Clonakilty camogie team that lost the senior B camogie final to Ballygarvan last year, O’Regan is determined to go one step further with Carbery in this season’s A championship.

There are four South East representatives as Ballinhassig, Ballygarvan, Courcey Rovers and Carrigdhoun are all involved as well.