The Dunmanway Town that came from 2-0 down to earn a 2-2 draw away to Clonakilty Soccer Club.

Rustiness was apparent as Dunmanway Town completed their first league fixture since November 20th, but the visitors halved the deficit shortly after half time before scoring an injury-time leveller to earn a point.

Mark Buckley scored both of Town’s goals in a fixture Stephen O’Donovan, Keith White and Stephen Daly were the pick of the visitor’s top performers.

The home team kicked off two points clear at the top of the Premier Division standings. A sixth Clon victory in ten league outings would maintain first place and keep their closest challengers, Drinagh Rangers, Bunratty United and Mizen Hob A, at bay. Instead, they finished the day joint top, alongside Drinagh.

Dunmanway travelled to Darrara possessing four games in hand on their opponents. Situated in the bottom half of the table, Town were eager to kick start their season. It was the home side that got off to the better start however, with Chris Collins watching a free-kick deflect wide. The resulting corner proved a pivotal moment as Collins’ delivery was headed into the back of the net by Jonathan Leahy. 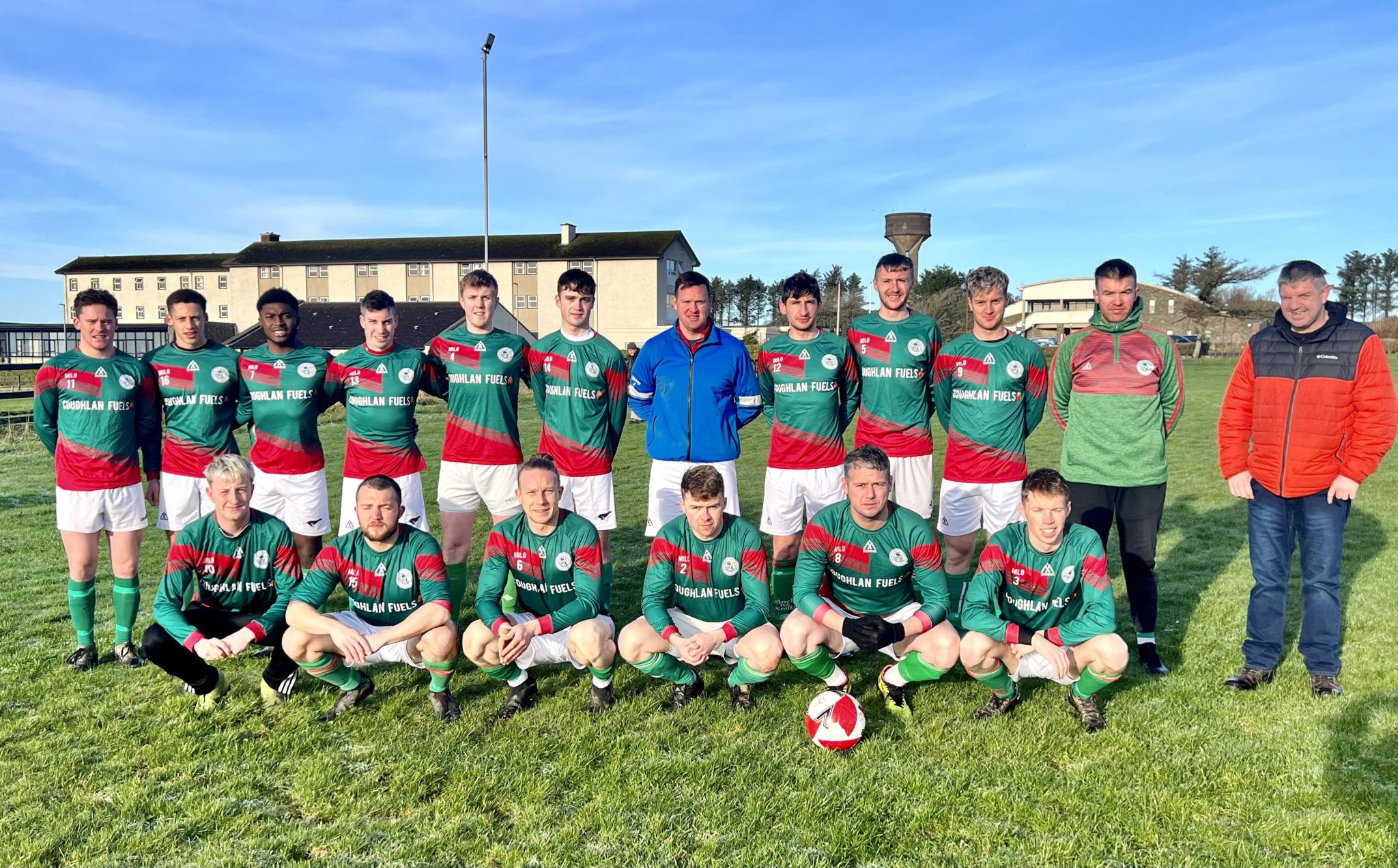 The Clonakilty Soccer Club team that threw away a two-goal lead at home to Dunmanway Town in their recent Premier Division clash at Darrara.

That early strike made for a free-flowing first half. Dunmanway were fortunate not to fall further behind when another Chris Collins and Jonathan Leahy corner-kick combination narrowly missed the target.

Leahy was denied by a point-blank Stephen Daly stop but there was no denying who the more dominant team was after 15 minutes.

An injured James Horan was replaced by Odhran Bancroft but Clonakilty remained in the ascendancy. Perfectly-timed Killian Vassallo and Stephen O’Donovan tackles prevented Dunmanway from falling further behind before the visitors finally responded.

Mark Buckley galloped clear and fired wide as Town began to test Clon’s back four. Next, Clon’s Iain O’Driscoll produced a magnificent save on the half hour. A rampant Dunmanway continued to press as a Nathan O’Donovan shot rattled an upright.

The chances kept coming as King Ayalla struck a post at the opposite end. Eoin Hartnett deflected a goal-bound Mark Buckley attempt over the crossbar a minute before the visiting side had the first of three penalty appeals waved away.

An entertaining opening half looked set to end with Clonakilty 1-0 up until five minutes before the break. Joe Edmeade was brought down inside the box following an untidy challenge. Chris Collins stepped forward and stroked home the resulting penalty to hand the Premier Division leaders a 2-0 interval lead.

Dunmanway required a fast start to the second period and got it. Keith White dribbled around two defenders and crossed for Mark Buckley to halve the deficit after 48 minutes.

A scrappy third quarter failed to produce a chance of note as midfield became an attritional area dotted with mistimed challenges. Dunmanway were much improved in the second half but had to remain vigilant to their opponents’ counter-attacking threat.

Mark Buckley forced Iain O’Driscoll into a fine save after 63 minutes; a rare second half clear-cut opportunity. Clonakilty’s press improved as the half progressed and the score remained 2-1 heading into the closing stages.

A superb Stephen Daly save tipped away a Chris Collins daisy-cutter prior to Jonathan Leahy and Sean Lawless both finding the side-netting. The hosts’ search for a third and match-clinching goal proved fruitless and Clon were punished.

Dunmanway Town’s dogged second-half display was rewarded with an equaliser a minute into injury-time. Clon’s defence was split open and Mark Buckley capitalised. The Dunmanway striker raced clear and flicked the ball under an out-rushing Iain O’Driscoll to complete their comeback and earn a 2-2 draw.