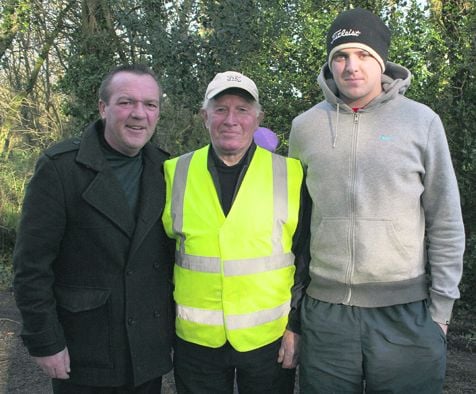 Despite winning the opening shots, Connolly found little going right for him in the remainder of a score that lacked excitement.

A tendency to drag too many vital shots to the right militated against the Clon man achieving any kind of consistency.

Broderick capitalised on mistakes to the first bend and on to the ‘women’s lane’ to move well over a bowl clear. Two big shots from here to the ‘rectory entrance’ extended his lead to almost two.

Connolly did his utmost but the Kinsale man was in unyielding mode. Another fine cast by Broderick to ‘O’Donovan’s bend’ effectively sealed the victory and the €500 first prize.

A good contest at Templemichael saw Maurice Connolly defeat Mick Gould in the final throw for a stake of €2,200. They exchanged the lead numerous times before Connolly raised substantial odds in the shots away from ‘Sarsfield’s corner’.

Gould rallied well towards the end and Connolly was forced to beat a good last shot to take the spoils.

Back the road here, Craig Moynihan, playing his third score of the weekend, beat a big last tip to defeat Jimmy O’Donoghue in the return. This one carried a stake of €1,000.

Gaeltacht venue, Terelton had four good contests. Honours were even all round as, in doubles, Michael O’Callaghan and James O’Leary combined to defeat Frank Kiely and Alan Keane, last shot for €1,680 on the outward route. Kiely/Keane got the better of their outward conquerors in the return, one bowl for €1,760.