Champions! Bandon celebrate after clinching the Munster Senior League Division 1 title after their win against Mayfield United on Saturday. 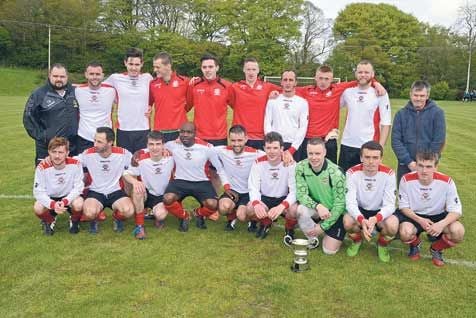 Champions! Bandon celebrate after clinching the Munster Senior League Division 1 title after their win against Mayfield United on Saturday.

FOLLOWING their promotion from Munster Senior League Division 1 as champions, Bandon will set their sights high next season – they want to win the Premier Division.

Last Saturday’s 3 – 1 home win against Mayfield United in Bandon clinched the Division 1 title for the West Cork team, as they bounced straight back up to the top tier at the first attempt.

Bandon’s first season in the Premier Division two years ago was a nightmare experience for the club, but after winning a Munster Senior League title for the first-time ever, manager Peter Jones is confident his team can carry their momentum into next year.

‘The aim will be to go and win it,’ Kinsale man Jones said.

‘Before a ball is kicked, if you’re just setting a target of staying up then that’s defeating the purpose straightaway. Any time I took over a team I’ve had one goal in mind – to win.

‘Bandon are the only West Cork team in the Premier Division and the catchment area is massive. We came in late at the start of this season and we didn’t get a chance to tap into the talent of the West Cork League. There are some very talented players in that league who could help out the players that we have.’

Bandon, who topped the table with 38 points from the 18 games, finished two points ahead of Mayfield, who are also going up.

A team with a nice blend of youth and experience, the previous season in the Premier Division, as well as the fantastic campaign just over, will stand to Bandon when they make the step-up in leagues.

‘We’ll be better equipped next season because the young fellas we have will come on a load from this season and the lads who were there before have the experience of the Premier Division and they’ll be wiser to it,’ Jones explained.

‘We probably have seven fellas on the team who are U21. Bandon have a very good youth set-up and it’s important to keep these lads together now and go again next season.

‘There’s a challenge there for them, to prove they are good enough to mix it in the Premier Division – and I think they are.’

It was Jones’ first season in charge of Bandon and initially he had a two-year plan to win promotion back to the MSL Premier Division. But as the season progressed Bandon were competing at the top of the table, and when it mattered the most they pulled out some big performances and results.

‘If you had said to me at the start of the year that if you win your last game you’ll win the league I would have snatched your hand off,’ Jones said.

‘Everything is so tight. It’s a long season. Fellas have been training for the bones of nine months, putting in a huge effort in the muck and the rain, so to finish the season as we have is fantastic and a credit to the lads.

‘A lot of the Bandon lads went through a tough time the season before in the Premier Division and they needed to fall back in love with soccer. It’s hard when you’re losing week-in and week-out, but they responded to everything we asked of them.’

The first senior trophy Jones has won as a manager, he was full of praise for his management team of Timmy Spillane, Eddie Andepu and Richie Holland, and the club’s committee, as he added: ‘The three lads have done a lot of great work behind the scenes and deserve a lot of credit for this. The committee was fantastic all season. Whatever we wanted or we needed during the year they were excellent.’

Against Mayfield on Saturday, Bandon were first on the scoreboard in a game that would decide which team would go up as champions. Brendan Cullen’s effort was finished by Gearoid Barry from close range, and straight from the kick-off an unfortunate passage of play saw Mayfield concede an own goal as their goalkeeper failed to deal with a back pass.

It’s worth highlighting that Mayfield had struck the woodwork before Bandon got on the scoresheet, but at the break the West Cork men led 2 – 0.

In the second half both teams were reduced to 10 men, for different incidents, but it was Bandon that stretched their lead when Brendan Cullen headed home a Richie Holland free.

Mayfield pulled a late consolation goal back but the celebrations were already beginning in Bandon, as they captured silverware to add to their promotion to the Premier Division.