WATER was in Teddy O’Donovan’s blood before he ever sat in a boat. His mother’s people were lobster fishermen. As a kid he soaked in tales of his grandfather’s and granduncle’s adventures on the high seas. Both were fishermen. They fished as far east as Dungarvan and went out west to Dursey Island. They had Teddy’s attention.

He grew up in Kilkilleen in the rowing-mad parish of Aughadown, close to the River Ilen, and he was always keen to get into a boat and row. Eventually, he did, and he was part of a Skibbereen Rowing Club four – it also included Dominic and Stephen Casey, also from Aughadown, and Lar Harrington – that never fulfilled its potential. But Teddy’s bond with the water was and is strong. He worked, too, in local boatyards. He coached at the club. And he introduced his two sons, Gary and Paul, to rowing and water when they were kids. It kept the tradition alive and passed it down to the next generation.

Teddy was raised in Kilkilleen before building a house in Lisheen where Gary and Paul grew up. It’s not a coincidence that those two brothers have transformed Irish rowing and exposed its beauty and madness to an entire new audience. From the very start, living in Lisheen and with Aughadown DNA, they were on the front foot.

The parish of Aughadown has a very strong connection to the water, with the River Ilen on one side and Roaring Water Bay touching many townlands within the parish. The water is in Teddy’s genes and that’s replicated throughout an area that has produced an incredible number of world-class and international-class rowers, as well as the man who was voted the best rowing coach in the world in 2018.

Dominic Casey is a key figure behind Skibbereen Rowing Club’s rise from a small, rural club to becoming a behemoth of Irish rowing and the number one club in the country. He grew up in Collatrum in Aughadown. His father, also Dominic, had sandboats that moved all types of cargo from the islands to the mainland. Dominic grew up on the water, working with his dad, went on to work in local boatyards, later joined Skibbereen Rowing Club, won eight national titles as a rower before transitioning to Coach Casey and overseeing the club becoming the most successful in the country and also the recent success of Irish lightweight rowing in his job as Rowing Ireland Lightweight Coach. His four kids all row too. Again, tradition. Passing that flame on to the next generation.

‘If you are raised on bacon and cabbage you’ll have a soft spot for it. We are what we eat, we are where we grew up and we are what our parents were before us. If you look at the area, it was a fishing community,’ says Mike Cotter, from Lisaree in Aughadown. He rowed with Skibbereen Rowing Club and has coached there for longer than he can remember.

‘I think it’s in our breeding. I just knew when I was young that I wanted to row, badly. I didn’t want to play football, I wanted to row. I just had a want to do it. I didn’t know until I was rowing for a while that my grandmother and granduncle were in the mixed gigs back in their day and were successful, too. 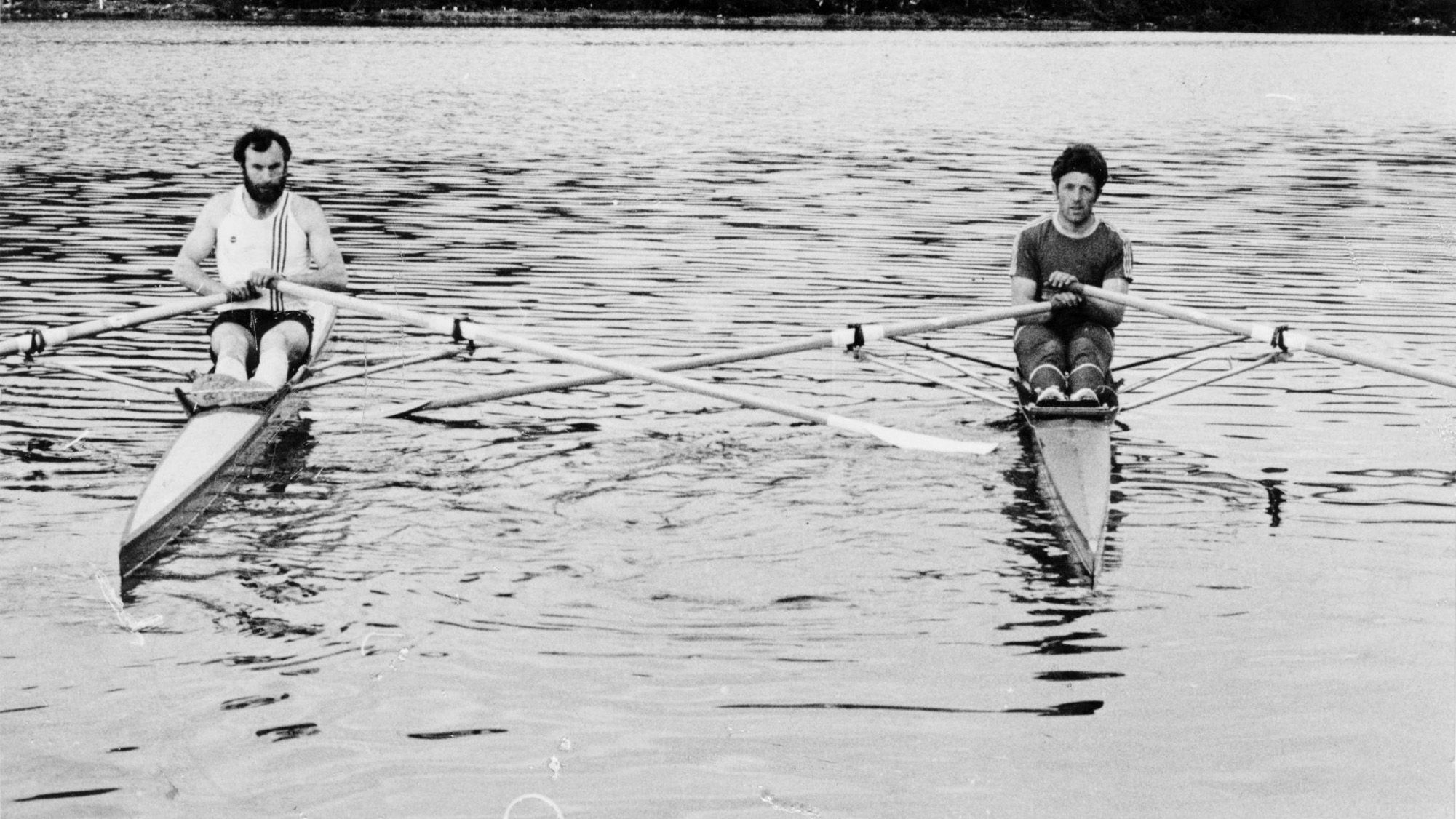 Teddy O'Donovan, left, and Dominic Casey, both from Aughadown, pictured in their own rowing days with Skibbereen Rowing Club.

Stretching back to well before the legendary Crowleys of Ardralla, in their feared gig boats, bossed local regattas – a huge social event on Sundays during the 1960s, 50s and earlier – there was a strong tradition of rowing in Aughadown, and that cultural connection is one of the reasons why this parish is home to so many elite rowers. Here are some of its most well-known rowing sons and daughters:

That’s an impressive list. This one incredible parish is a conveyor belt to Skibbereen Rowing Club. Aughadown is home to Ireland’s first-ever Olympic rowing medallists, Gary and Paul O’Donovan. World champions. European champions. Multiple Irish Championship winners. But why is this? What’s so special about Aughadown? The answer: everything.

It ties in to the study by Dr Jean Côté, a professor of sports science at Queens University in Ontario, who cited a number of reasons why small towns can provide the ideal breeding ground for top-class sportspeople and why people born in a small town have a better chance of reaching the top of their sport compared to people from a big city.

Dr Côté’s findings are as applicable to Skibbereen town and its successful relationship with Skibbereen Rowing Club as it is between Aughadown and Ireland’s best rowing club.

There’s the cultural importance placed on rowing in Aughadown, which is the parish’s tradition with rowing, not just for sport but also work and employment, fishing and carrying cargo up and down the River Ilen.

There’s the accessibility of rowing role models – for example, Dominic Casey remembers Sundays spent going to local regattas and watching the Crowleys in the Ardralla boat, and they were the best year after year, and that had a lasting effect on him. Factor in the Gary & Paul Effect, too – who wouldn’t be inspired by those two?

Then there’s the access to top-class coaches, and this is where Skibbereen Rowing Club excels and is such a key part of the success. The club has the tried-and-tested structure, excellent coaches and a successful training plan to take in young rowers, train them to an incredibly high standard and give them the belief, skills and opportunity to take on and beat the best.

‘A lot of it has got to do with us being members of the rowing club. It has a good programme, a good history of success, a good coach that can help us get to international level and international success,’ Gary O’Donovan says.

Also, Aughadown has access to one of the best rowing rivers in the world, the Ilen River. This is the breeding ground of champions and this incredible, natural amenity is only ever a few minutes away. A short drive in a car and you’re at Skibbereen Rowing Club’s HQ. The same goes for local rowers from the other side of the river. 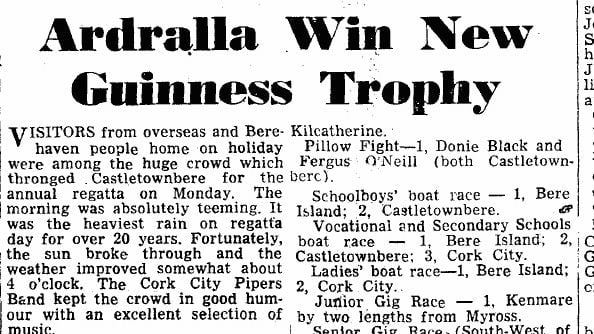 This is a clipping from The Southern Star from August 7th, 1965.

Success breeds success, too. Especially in the rowing club. Take Fintan McCarthy from Foherlagh in Aughadown for example. In August 2016, as two young men from the same parish lit up the world at the Olympics in Brazil, Fintan was 19 years old. He was in The Paragon Bar in Skibbereen when Gary and Paul won that historic Olympic silver medal. That moment stayed with him. He is living in the same parish, training in the same club as the Lisheen legends, with the same coach, on the same river, with the same training programme. If they can win an Olympic medal, why can’t I, he thought. Three years later he was sitting in the Irish men’s lightweight double alongside Paul O’Donovan as they won World gold.

‘If you lived in, let’s say, Dunmanway and you said you want to go rowing, they’d look at you,’ Mike Cotter explains, ’but when I was young and said I wanted to go rowing, my parents were delighted because that’s what they did. My grandfather rowed up and down the river with coal and grain or whatever as a way to earn money.’

Rowing is part of life in Aughadown. It has been for generations. That’s set to continue. It’s one of the main feeder areas for Skibbereen Rowing Club. Together it’s a winning combination. And there’s more to come.

Two men from Aughadown – from the group of Gary and Paul O’Donovan, and Jake and Fintan McCarthy – will fill the seats in the Irish lightweight men’s double at the Olympics. A gold medal there is realistic. And that will inspire a new generation. That boat is coached by an Aughadown man. Like the River Ilen never stops, neither too does awesome Aughadown: the parish of rowers.