Aoife Casey loved every minute of her Olympic experience.

From the 2016 World Juniors to this year’s Olympics, Aoife Casey’s success story has been years in the making. KIERAN McCARTHY caught up with the Skibbereen rower ahead of the Games

ON a raw Saturday morning in February 2019, still in the grips of the January blues, I got a glimpse into the life of world-class rowers. It wasn’t glamorous, but it was cold.

There was a biting chill hanging in the air at the National Rowing Centre in Inniscarra, but Aoife Casey, then 19 years old, took no notice. It was dry, at least. Like all Skibbereen rowers, she’s as hard as nails.

She was training in her single scull. The Irish lightweight high-performance gang – overseen by her dad and coach Dominic Casey – were on the lake at 8.30am for the first session. They paddled up towards the bridge. The warm-up batted away the lingering shivers. And off they went, up and down the lake. The hard slog, again.

Some time later and in off the water, Aoife had time for a quick shower and a bite to eat before a team meeting upstairs. She came prepared, tucking into a lunchbox of fried-up beans, pepper, coriander and tuna. She made flap jacks the night before, too. After the meeting, Aoife was back on the water for her second session, this time in a lightweight double with Skibbereen club-mate and Irish international Denise Walsh. Tough going, physically and mentally, but that’s the existence of a rower – and it’s the life Aoife knows and enjoys.

It’s also the life she chooses.

She has also chosen to trust in the process set out by her dad, Irish lightweight rowing coach Dominic Casey, and that’s paying off as two years on from that cold morning in early 2019, when I got to peak behind the curtain for a few hours, Aoife is Tokyo-bound in the Irish lightweight women’s double alongside Margaret Cremen from Lee Rowing Club.

‘He has definitely instilled in us to trust the process: that hard work pays off,’ Aoife says.

‘Even during the winter, if there was a gale-force wind outside, Mags and myself would be looking out the door at the water, asking do we have to go out, and he said, “Yes, this is what Tokyo will be like”. At that stage we hadn’t even qualified for the Games.

‘You have to be able to manage the boat in any conditions. If there was any bit of wind, we were sent straight out. He pushed us hard but that will stand to us.

‘It’s been a long process that has taken years. All those mornings during the winters getting up early to go training. It’s been a slog but there has always been a target: to get better. It’s good to see that all the hard work has paid off.

‘If you told me at 16 that I would be going to the Olympics when I was 22, I don’t know would I have believed you, but here we are.’

Aoife’s trust in the process is reaping rewards and here’s a rower who was surrounded by the sport and the water from the start.

Aoife (22) is the second oldest of her siblings. Her older sister Niamh (24) rowed but is taking time out at the moment to concentrate on her Masters. Then there’s Caoimhe (18) who rows, as does Dominic (15) – and they’re making the most of their sister going to the Olympics by using her car to ferry themselves over and back to the rowing club in Skibb.

All four have a love of the water and all four enjoy staying active – and that’s because of their parents, Eleanor and Dominic, and the environment they created at home in Ardralla. 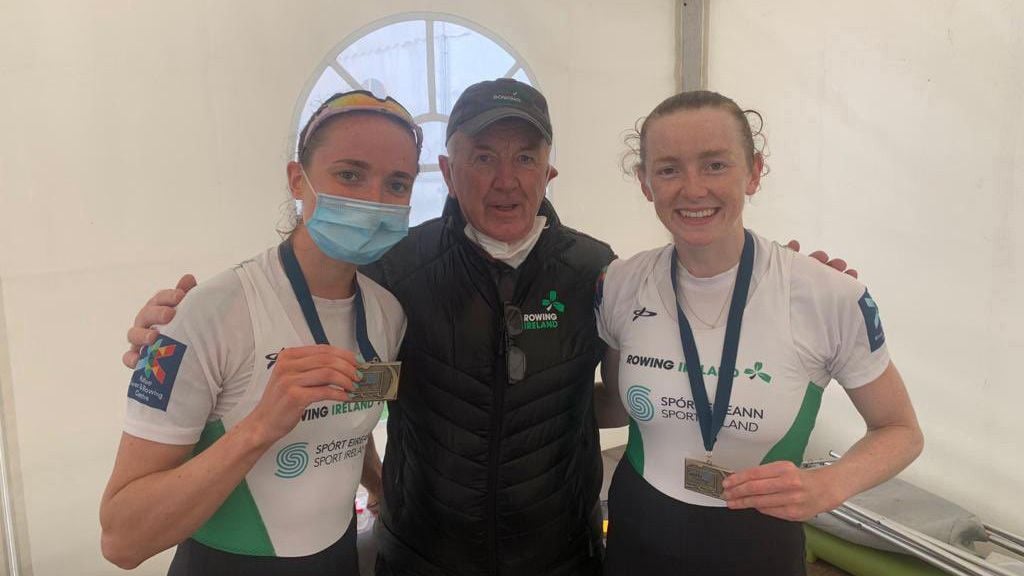 Eleanor rowed with Skibbereen before, and coached, has ran in marathons, competed in triathlons and loves to cycle. In his own rowing days, Dominic was one of Ireland’s finest oarsmen in the 1980s and as a coach you’d do well to name a busier man in the country. They know all about hard work, too, and that’s rubbed off on their kids.

‘Aoife is relentless with her training. She’s very motivated and never wants to miss a session. She will train every day because she knows if she goes to every session then that is the best she can do,’ Niamh explains.

That’s the process that Aoife has committed to. Hard work will take you places and it has for the Skibb oarswoman, both on and off the water. For the last few years she has split her time between rowing and her studies. In May 2017, only 17 years old, Aoife, alongside Margaret Cremen, won a silver medal at the European Junior Championships in Germany, Ireland’s first-ever medals at this event. The final was on the Sunday and she was back in the classroom at Skibbereen Community School the next day.

She uses her studies to switch off from rowing and vice versa, but her work ethic to both shows us why this Skibbereen woman – now studying Medical and Health Sciences at UCC – is excelling on and off the water. Both rowing and academics compliment one another because you need discipline to achieve in both. Aoife has that discipline, has that work-rate, has the ideal environment, and also has one incredible experience that left an impression. 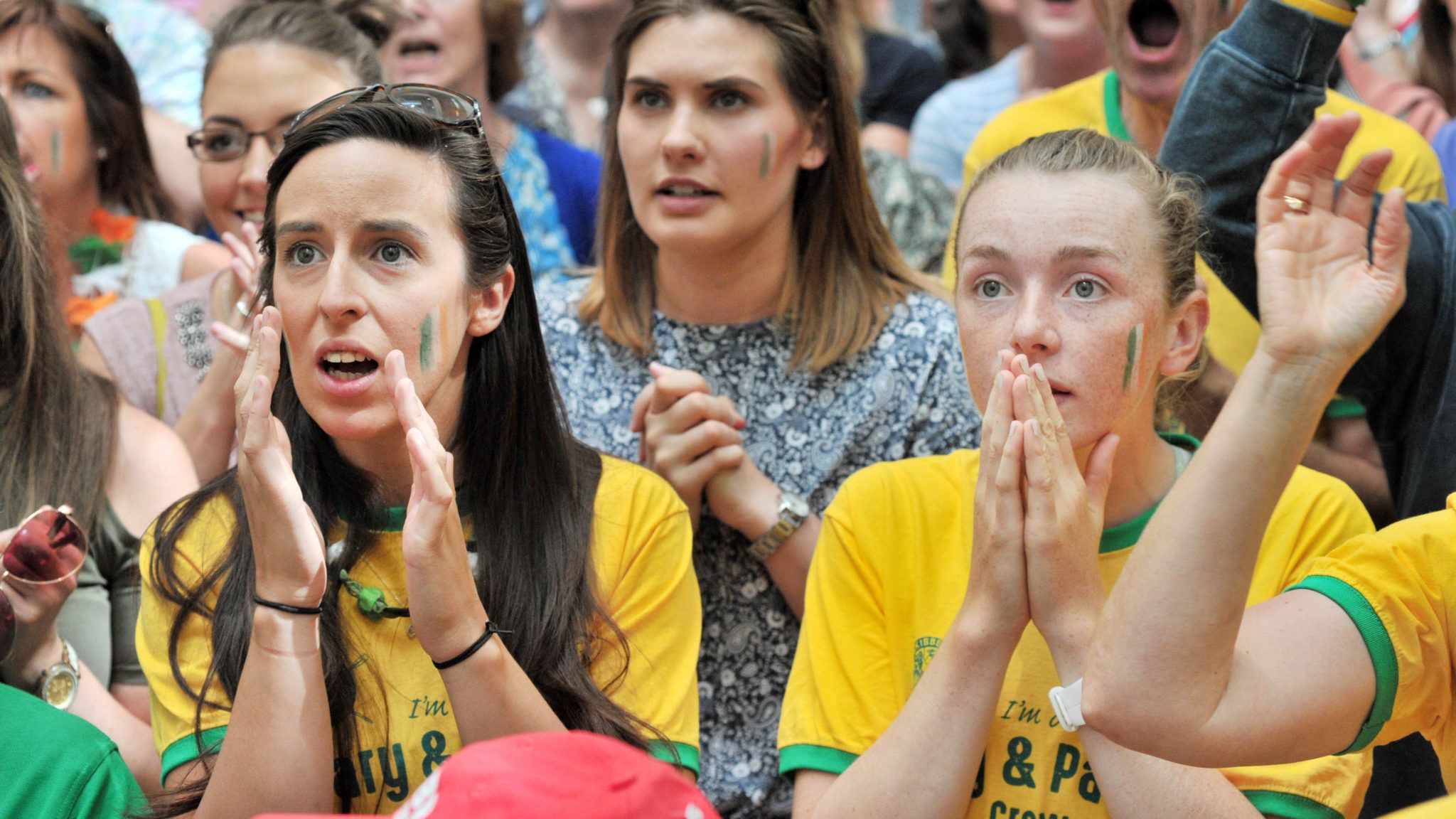 Aoife Casey (right) and Denise Walsh cheering on Gary and Paul O'Donovan during the the 2016 Olympics in Rio.

Aoife was on that red double-decker bus that snailed around Skibbereen town on Monday, August 29th, 2016, for the glorious homecoming of Olympic silver medallists, Gary and Paul O’Donovan.

The town creaked with the crowd that night as the Lisheen legends – from the same Aughadown parish as Aoife – took centre stage.

She was 17 at the time and had just competed at the World Junior Championships in Rotterdam alongside Skibb club-mate Emily Hegarty in the double. That was Aoife’s first World championship event; they finished 12th. There was a loud Skibb contingent at those championships because the Olympic party started in Rio continued there, as Paul stormed to World gold in the lightweight single.

‘That was such a learning experience because I was so young and it was a real eye-opener regards the standard,’ Aoife says.

‘Emily and myself had raced the year before at the Coupe de la Jeunesse but this was our first real World Rowing event.

‘I remember flying home into the homecoming in Skibb and there was all this fanfare. It was such a motivator to think that we finished in 12th place, but next year I wanted to do better than that. It made me really hungry for more training and more rowing, if that was possible.

‘It’s quite mad when you think about it now, that I was on that bus for the homecoming in 2016, and so was Emily, and look at us now, both going to the Olympics but in different boats. A lot can happen in five years and has happened, too.’

Aoife’s rise from the 2016 World Juniors to the 2021 Olympics is not an overnight success story. It’s backboned by those years of grafting and rowing and weights and rowing and training and rowing, all the time with the target of improving. And she is. And she’s also only 22 years old since June. Aoife’s still on the way up and so too is her partner in the double, Margaret Cremen.

This Skibbereen and Rochestown combination is strong. In their junior days, they were rivals on the water and there was a competitive relationship there. Now, they’re crew-mates, house-mates in Ovens and friends.

‘We both have the same goal and we can push each other on to get the best out of each other,’ Aoife explains – and their results back that up.

There’s that silver medal together at the 2017 European Juniors. They won silver again at the European U23s last year. Then in May, pulling the hardest strokes they ever pulled, they took the last remaining lightweight women’s double spot up for grabs at the final Olympic qualification regatta in Lucerne. That was an incredible moment for the young crew who were ranked as outsiders for the Games earlier in the year. The thinking was this is a young crew that can target the 2024 Olympics in Paris, but they had different ideas; they wanted Tokyo. All the hard work paid off. Aoife burst into tears afterwards with the relief. She had qualified for the Olympics. Now she’s there, she wants to cause another surprise and prove the doubters wrong. 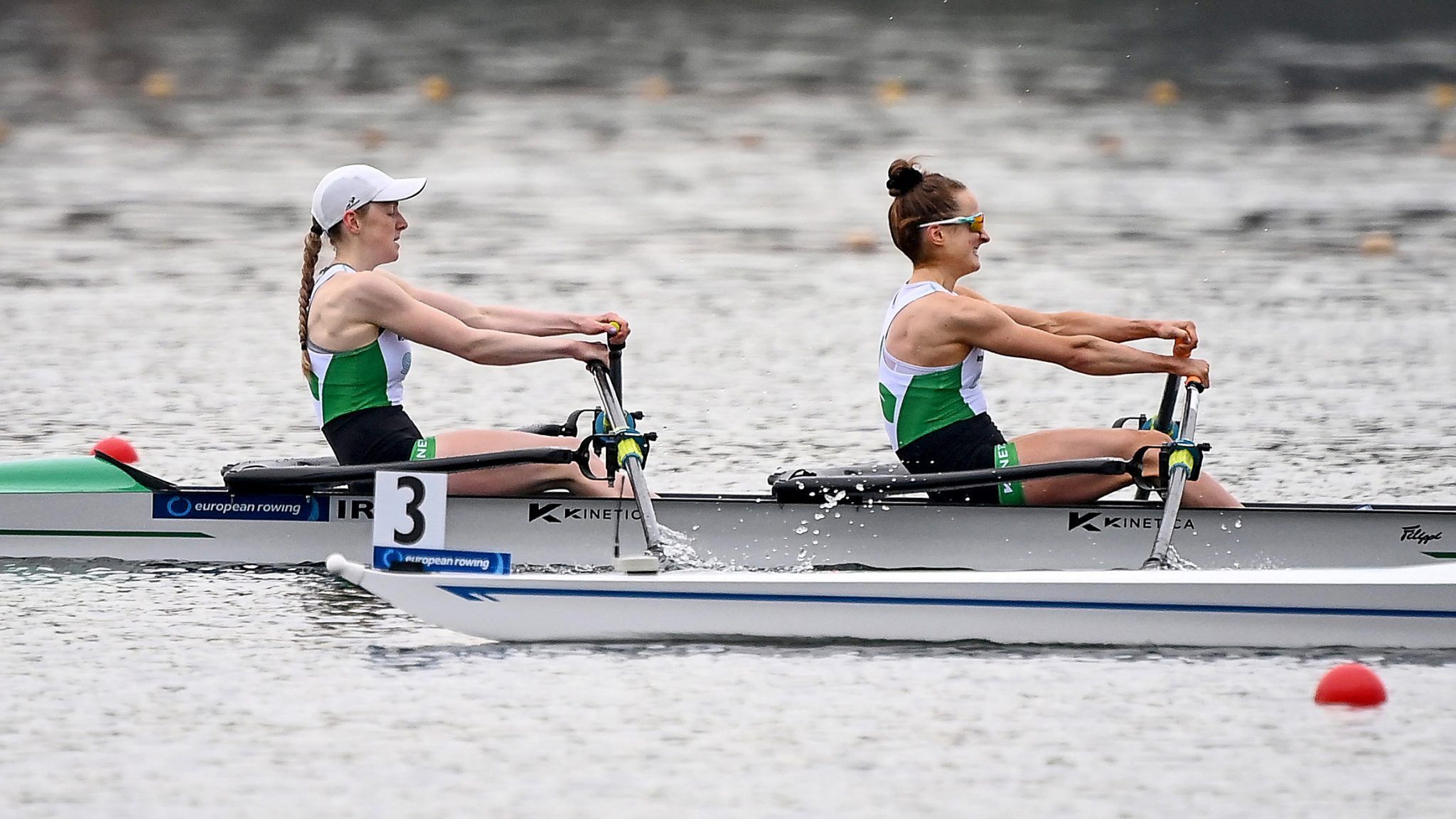 Aoife Casey and Margaret Cremen competing at the 2021 European Rowing Championships in Varese.

‘It’s an exciting time for every boat, especially for us. From the start of the year to now we have improved a lot. We believe in ourselves and what we are doing,’ Aoife explains.

‘When it comes down to it, it’s us and the boat, us and our coach. We don’t listen to other peoples’ opinions. What matters most is what we think so when we are on the water it’s “what does Dominic think about our technique for that piece?” or “what does he think about the speed for that piece?” It’s what do I think and what does Mags think. We bounce that info off each other and build it from there.

‘We are motivated to do the best for ourselves because at the end of the day that’s all we can do.’

There’s an assertiveness to Aoife that’s impressive. Mentally, she’s very strong. She’s a leader in the boat. Usually she sits in the bow seat and makes the calls – and she’s comfortable there. Responsibility rests easy on her young shoulders. She’s driven to find those extra inches and extra speed that will make all the difference. It’s a goal her dad shares.

Dominic Casey is a former World Rowing Coach of the Year, but Aoife stands on her own as an Olympic-class rower. Their stories are intertwined, as a coach and rower and father and daughter, but Aoife’s success deserves to be recognised on its own. She wants to make her own name in the world of rowing.

Dominic’s influence, of course, is there, but it’s Aoife who has that in-built drive and desire to connect the dots from the River Ilen to the Tokyo Olympics.

It’s Aoife who was in the boat with Margaret Cremen when they qualified for the Olympics. It’s the same duo who will power the Irish lightweight women’s double at the Games in Tokyo.

Aoife’s carving out her name in rowing, shaped by following and trusting in the process. All those kilometres on the water, rough and calm, and all those hours on the rowing machine and all those hours in the gym – that’s the journey that has taken Aoife to this point. And she’s only getting started.