Alisha with Zoe on her Communion Day 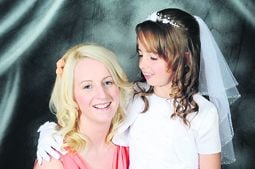 Alisha with Zoe on her Communion Day.

THE mother of eight-year-old Zoe Scannell from Abbeyfeale who was killed near Rosscarbery in a road crash last June has met, and forgiven, the young male driver who caused the accident.

Alisha Scannell met Ian Lawlor O’Donovan before he was sentenced in Cork Circuit Court last month, and she says she is glad that they met.

‘I don’t see what the big deal is about forgiving him. I can’t see how anyone else wouldn’t forgive him, I don’t think there’s anything extraordinary about me and I’d imagine anyone else would do it,’ said Alisha Scannell, speaking to The Southern Star.

He lost control of his mother’s car after a driving lesson and ploughed into the car. Zoe was killed instantly. Lawlor O’Donovan was banned from driving for six years.

The court heard that the young driver is due to sit his Leaving Cert this year.

‘To me, I think I was the least brave in this. He was very brave as he’s only 18 and yet he wanted to meet the mother of the child whose death he caused with his car.’

‘I think he was being remarkably brave,’ she added.

On meeting Ian, Alisha said that all she could see was that he was someone else’s child and that he was an only child, just like Zoe.

‘All I could think about was his mum and the sympathy was on my side, and I felt for her and him. He’s doing his Leaving Cert and he is really only a child.

‘I remember at the start when hearing about him, I had in my head that he would appear yobbo-ish, with tattoos and a shaved head, not that there’s anything wrong with that, but this was in my head and I had him also speeding like a boy racer,’ she added.

‘But to know he wasn’t like that meant so much and to know he was so remorseful and that he was a normal young lad, who happened to make a small mistake that had big consequences.

‘We spoke and I just told him about Zoe’s life and how she would want him to live his life to the full now, as I had heard that he had been finding things extremely tough.’

Alisha and her partner Eddie Murphy are organising a special weekend of events from May 15th to 17th in their home town of Abbeyfeale to remember Zoe, which includes a cycle challenge, a variety concert and a special fun day.

All proceeds from the events will go to two charities, First Life and Bru Columbanus.

Alisha said she gave Ian one of Zoe’s loom bands when they met.