A still from the Glengarriff webcam showing Dad, otherwise known as ‘W’, feeding the two chicks.

THE first – and only – webcam of nesting white-tailed eagles is now streaming live from Glengarriff Harbour.

Clare Heardman, conservation ranger with Glengarriff Woods Nature Reserve, confirmed that now people anywhere in the world can watch the development of the two white-tailed eagle chicks from the comfort of their own home.

The conservation ranger gave The Southern Star the backstory of the parents and it is every bit as interesting as any soap opera on any other channel.

It seems that the male, whom Clare calls W, has been nesting in this area since 2014, but it is only since 2018 that he and his Mrs became a couple.

During that year, it seems he had been a bit of a bold boy and was seeing someone else, and had two nests on the go!

The female, whom Clare calls Mama P, ousted the first female, and this is their second year in that nest. 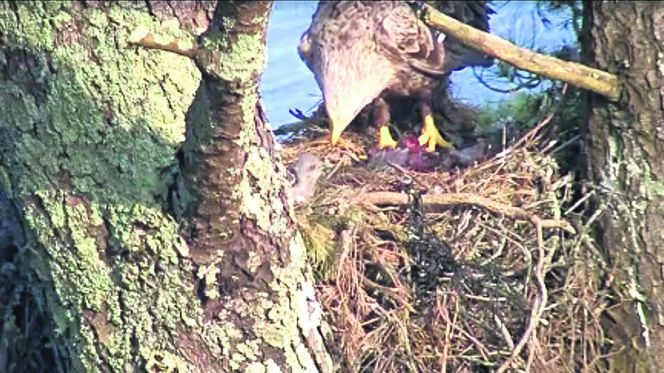 Feeding time for the white-tailed eagle chicks who are just days old.

‘But this is not actually their first chick,’ Clare confirmed. Tragedy – in the form of Storm Hannah – struck last April and their chick, who was just about a week old, died.

Last Wednesday – just one day after the webcam that was provided under licence by the national parks and wildlife initiative went live – the first chick hatched.

Viewing figures for the webcam spiked at 55,000 on Twitter, as well as almost 50,000 views on the Glengarriff Woods Nature Reserve Facebook page – more than 100,000 views since the camera went live on April 14th.

There was another rush to catch up on the daily doings of the white-tailed eagles on Sunday when the second chick hatched.

According to Clare, there are lots of people are dipping in and out of the live stream: there could be 50, or more, people at any one time watching the eagles take turns to tend to their chicks.

‘It is very exciting,’ said Clare, ‘normally I am monitoring them through a telescope – at a distance – but now anyone can monitor them at any time of the day and see the interaction between the adults and the chicks.’

She said: ‘It’s especially nice to be able to share this experience.

‘I have been watching eagles since 2012, when they first turned up in Glengarriff, but now people have a chance to see them in their natural habitat.

‘The timing is good too,’ she said, ‘especially for people who, due to Covid-19 restrictions, feel they are missing out on nature. I’ve been told that there are lots of people who are cocooning that have become glued to it.’

Clare said it was a stroke of good luck that the nest was positioned in such a place that they were able to rig up the webcam nearby, and plug it directly into a mains power supply.

Sometimes, she explained, nests are in remote valleys where only a battery operated webcam could be installed. Glengarriff, by contrast, is 24/365.

In a bid to temper people’s expectations, Clare did point out that the chances of both chicks surviving are low. 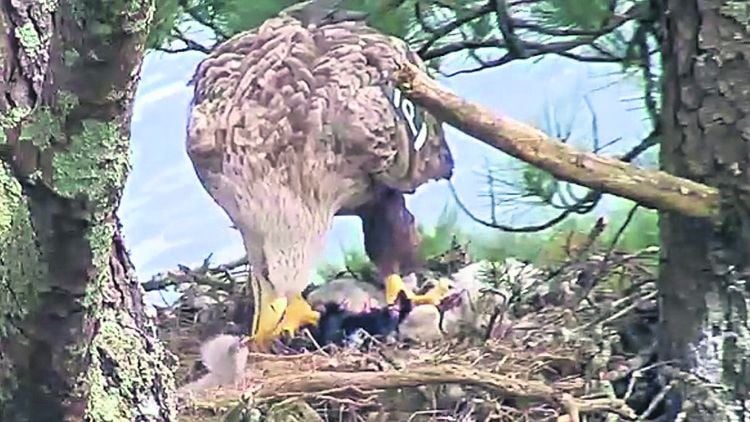 A close up of the chick being fed.

Never before have two chicks survived in either Cork or Kerry, although two did fledge out of a nest in Lough Derg. ‘For the first three weeks,’ she said, ‘the chicks are really vulnerable. It’s a crucial period. But if they survive that they could fledge when they are 12 weeks old.’

Viewers in West Cork, and the world over, will be glued to the next instalment.