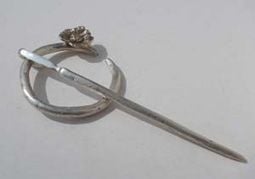 HELLE Helsner, a Danish artist and jewellery designer, who this year celebrates 20 years living and working in West Cork, has further reason for celebration as one of her handmade pieces has just been delivered to HM Queen Margrethe of Denmark.

The brooch, in gold and silver and specially made to commemorate the Danish Queen’s 75th birthday, was inspired by early medieval Irish brooches.

It incorporates a daisy in honour of the Queen who is affectionately known by the Danes as ‘Daisy’.

The brooch was hand delivered to the Queen’s private office by the Irish embassy in Copenhagen with a cover letter from the Irish ambassador to Denmark, Cliona Manahan.

Originally from Copenhagen, Helle Helsner moved to Ireland in 1994 to study Fine Art at the Crawford College of Art and Design in Cork.

Working primarily in sculpture she began, early on in her career, to explore the inclusion of bronze casting in her practice. This led to a two-year masters in pre-historic casting techniques.

She subsequently established her own studio practice in Ballinspittle. She recently developed a collection of bespoke fine art jewellery. See also [email protected]