IT’S been a notable couple of weeks in the international response to the climate crisis with politicians, business people, protestors and activists descending on Glasgow for the Cop26 talks.

Even Leonardo Dicaprio turned up, a man who surely understands a little of what’s ahead for the world, given all the time he spent below deck on the Titanic.

No offence to the good people of Glasgow, who are some of the soundest human beings you’ll ever meet, but I spent a lot of time there over the years through my television work, and if there was one place gloomy enough to sober people up about impending global doom, then Glasgow’s the spot.

High winds, rain that seeps slowly into your consciousness, the tendency to deep-fry anything that moves ... In the middle of winter, it’s a bit like Belfast with a hangover. And apparently, the binmen are on strike too, which is hardly helping.

We hear that lots of important discussions have been taking place and lots of big commitments are being made by lots of people and groups with fancy-sounding titles.

The announcements are numerous, technically complex and hard to keep track of. There have been pledges on methane, deforestation and coal. Last week, UN climate envoy Mark Carney announced a pact between 450 banks, investors and insurers to make €112.5tn available to pursue net-zero (although I’d like to see the terms and conditions on that one).

And the USA is back at the table after four years of Trump polluting the atmosphere with his own noxious emissions. It’s great to see Joe Biden back on the international stage, even if he needed a few power naps along the way.

Some of the most encouraging takeaways from Cop26 so far include India declaring it will aim to meet net-zero by 2070 and the EU and US agreeing to reduce methane emissions by 30% by 2030.

The aim is to force emissions and temperature dials down and limit global warming to 1.8 degrees, slightly up on the 1.5 degrees agreed at the Paris accord and there is tentative optimism that this will be doable.

China and Russia were nowhere to be seen, of course, which tells its own worrying story. 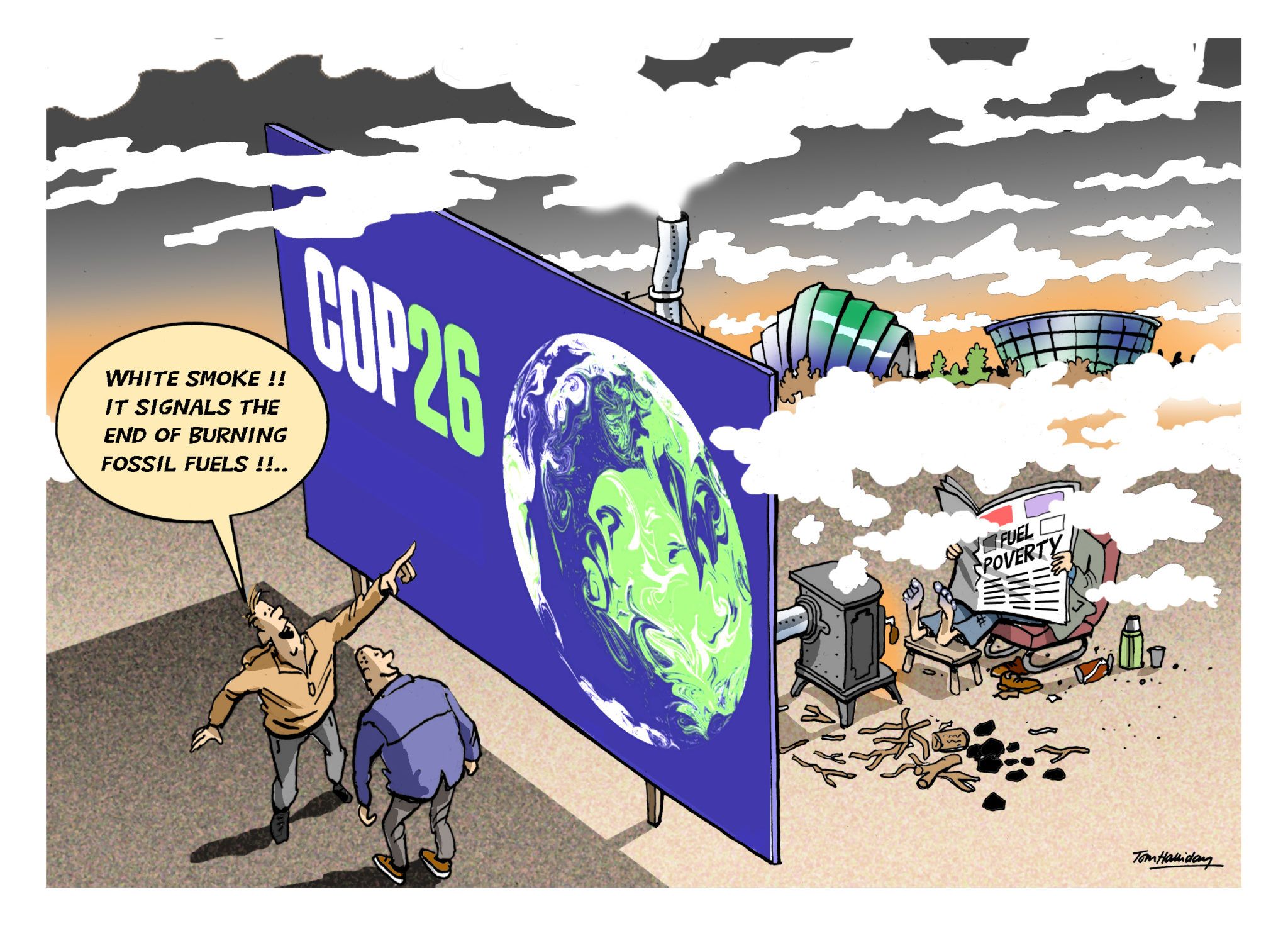 Ryan stepped out, in again

ON the domestic front, the whole conference nearly had to be cancelled with the news that Eamon Ryan, our own boomer-grade Greta Thunberg, had tested positive for Covid-19 at the weekend and could not attend.

Luckily, thanks to the magic of antigen testing, he soon tested negative again and was off on his bike, or however he ended up going there.

The ‘aul antigen tests come in fairly handy, don’t they? And we are only talking about rolling them out to schools now?

Ryan was at the forefront in the announcement of our own Climate Action Plan last week which includes notions to retrofit 500,000 homes by 2030 at a cost of €28bn, or €56,000 per family home, according to official figures.

It all sounds lovely but as it takes between 15 to 20 years to recoup the cost of a deep retrofit, the government will have to be imaginative in how it incentivises people to take meaningful action. The same can be said for the mooted transition to EVs.

Like many of the folks at Cop26, we’re all ready to tackle the climate challenge in theory. But this hasn’t translated into reality for most of us yet. Last week it was reported that traffic has returned to pre-Covid levels in Dublin city.

Will we be back in a year’s time with Cop27 and what will have been achieved?

Will we need a CopOnToYourself30 in a few years’ time to really get the whole country on board?

And pigs will fly ... or float

I WAS tickled earlier this week by a report that former Babe star James Cromwell (he played the farmer, not the pig) has written to the Irish Minister for Agriculture Charlie McConalogue to protest against plans to send Irish breeding sows to China. And he was on Claire Byrne Live, too, explaining why.

Apparently, China needs the pigs to feed its (rapidly) expanding middle class after the country’s herd was decimated by the deadly African swine fever earlier this year.

The star of The Green Mile, LA Confidential and Succession, amongst others, clearly has a place in his heart for the piggies since his time playing the owner of a shepherd pig called Babe in the movie of the same name and believes the exporting live pigs both ‘unnecessary and cruel’.

‘They are fascinating animals,’ he goes on to write to the Minister, ‘who possess a remarkable capacity for love and joy – as well as sorrow’, presumably referring to the pigs and not Fianna Fáil more generally.

It does seem daft, though, doesn’t it? In a week where the Taoiseach has said Ireland has no option, but to act on climate change, we are still sending pigs halfway around the world to fill in after a swine flu outbreak? It appears that pigs may well fly, before we start taking our climate responsibilities seriously.