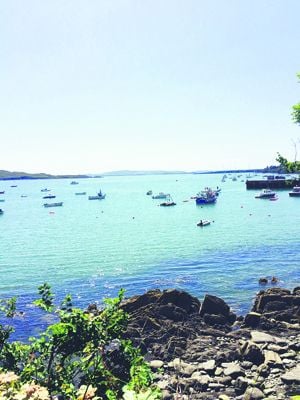 A HARBOUR development company is confident that a €6m project for Schull can be achieved within the next two years.

Schull Harbour Development Company is a community project that has already enjoyed considerable success in securing a 10-year planning permission that was granted in 2007 for a 235-berth marina, the extension of the existing pier for fishing and ferry operators, and ancillary works.

The company, which was established in 2006, is unlike any other, in that it has already raised €370,000 after 100 people paid €3,000 for an entitlement to buy a licence for a berth in the proposed marina, with other contributions coming from the people of Schull town.

David Byrne, the former attorney general and former EU Commissioner, and chairman of the Schull Harbour Development Company, told The Southern Star: ‘The money we raised was spent on a raft of technical studies – such as seabed mapping and core drilling and a study of the marine ecology – all of which were needed to secure planning.

‘These studies were necessary to show that Schull Harbour is a suitable place for a development of this kind, and we were encouraged by the extent of the local support for this initiative.’

Mr Byrne explained that the not-for-profit organisation has widespread support because it is all-inclusive and will not just benefit boat owners, but will also increase the economic and tourism development of the region.

The public private plan is, however, dependent on securing funding from Cork County Council, the Department of the Marine, Fáilte Ireland, West Cork Development Partnership and a new EU programme known as the Atlantic Area Programme 2014 – 2020.

Mr Byrne said: ‘For the project to be successfully completed, the Schull Harbour Development Company will need to raise an estimated €3.5m in terms of investment and borrowings, as well as €2.5m from public sources.

Mr Byrne said that Schull Harbour Development Company ‘has the vision and commitment’ to see the project through, and with the ongoing support of the Council, and other State agencies, it is possible to significantly enhance the harbour facilities.

‘Everyone will benefit from this project,’ said Mr Byrne. ‘Now we are appealing to anyone who would like to invest to come forward so that we can meet our Spring 2017 planning deadline.’

Anyone who would like to invest in a pre-sold berth (costing €2,500 annually) can contact Simon Nelson, who is the secretary of the company and runs Schull Watersports Centre, by phoning 028 28554.

Meanwhile, Schull Harbour Development Company has secured, in principle, a commitment by AIB, representing the European Investment Bank, to provide a matching loan over a 12-year period.

Alternatively, the community project could be in line to secure a loan from the newly established ‘Juncker Fund’, which is the European Fund for Strategic Investment – a loan that would be repayable over a 15-year period.