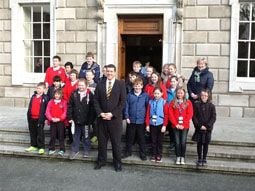 A NOMINATION for a drama award led to a group of Dunmanway students visiting the Dail recently.

‘It all began when Evan Wilson, from Drinagh, won a nomination for a drama review, from the Bord Gáis Student Theatre Awards in Dublin,’ explained principal Sharon Hosford.

Although Evan didn't win the award, 3,300 entrants took part, so the nomination was a bit like the Oscars for the school.

And, as a result, Bord Gáis sponsored a bus to bring the senior classes to the capital for the event.

‘The award ceremony will be a very special memory for us,’ recalled Ms Hosford. ‘Normally in schools, children perform for adults but here professional dancers performed for the children. There was razzmatazz and glamour. Names were up in lights and lovely awards were presented.’

The principal paid tribute to Bord Gais for ‘giving something back’ with the ceremony.

As some of the children had never left Munster before, the school wanted to plan a day out for all remember.

They contacted their local TD, Michael McCarthy. ‘He said if we were ever in the vicinity, we should visit,’ recalled Ms Hosford, who held him to that suggestion.

‘We had seen the Dail on telly, but this was the real thing. We sat in the visitors' gallery of both the Dáil and the Seanad. We admired the portraits and discussed the merits of various Taoisigh. We smiled at people we recognised,’ she told The Southern Star.

Deputy McCarthy met the children and posed for photos with them. Afterwards, the school also visited the nearby Natural History Museum, seeing everything from Irish bog bodies to Egyptian mummies. ‘A kind attendant at the Archaeology Museum also educated us on the special qualities of the Ardagh Chalice, the Tara brooch and the Derrynaflan hoard.

They then enlisted local man Kevin McCarthy, the executive assistant to President Higgins, to show them around Aras an Uachtarain.

When they arrived, they were given VIP treatment, with freshly made apple juice to drink, and iced butterfly biscuits, among other home-made goodies, to eat. ‘We learned a little more history about past presidents and what they did for Ireland,’ said Ms Hosford. ‘The children were also invited to ask their own questions, so we discovered important things like what the president might eat for breakfast, and if he had ever had a ‘pyjama-day’. Kevin and the other staff put so much time and effort into making us feel at home, it was amazing,’ she added.

‘We sat on the sofas, enjoyed the hospitality, tried not to spill juice on the designer carpets, and were inspired by a man who leads our nation by example.’

‘President Higgins obviously chooses his staff very wisely too,’ she said. ‘Thank you to Kevin for his generosity with time and his thoughtfulness. It was a never-to-be-forgotten experience.