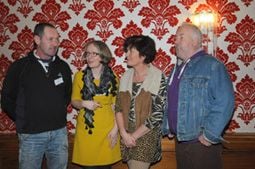 TOURISM interests from across West Cork gathered in the Maritime Hotel in Bantry last week, to discuss plans to promote the region.

The meeting was treated to a very useful insight into the success of the Loop Head Tourism group’s strategies, thanks to Cillian Murphy from Co Clare.

‘We are making a better place to live for ourselves,’ he said, summing up the ethos of the West Clare tourism body.

It was, probably, that very message that attracted so many people from a diverse range of tourism and community backgrounds – as well as those who are looking to explore new opportunities – to the mid-week meeting. The room was full of people.

‘Tourism development is an incidental outcome of that plan,’ said Cillian.

When the group started out, he said, there were many third generation business people living and working on Loop Head.

‘There was no pressure on them,’ he said.

But the worldwide recession woke everyone up and the community were mindful of the fact that nothing would happen unless they made it happen for themselves.

But with wishes come warnings. Cillian quoted the American travel writer and novelist, Paul Theroux, who said: ‘As soon as a place gets a reputation for being paradise, it goes to hell.’

Speaking to The Southern Star after the meeting, Finbarr Harrington, the chairman of Tourism West Cork, said: ‘West Cork has so much to offer. We have seen how the way the Wild Atlantic Way has had a positive impact on the tourism industry in West Cork, but we must utilise it more.

‘It is vital that each town and village in West Cork, not only promotes their own area, but also the surrounding areas,’ he added.

For full report on the tourism meeting, see next week’s Southern Star.