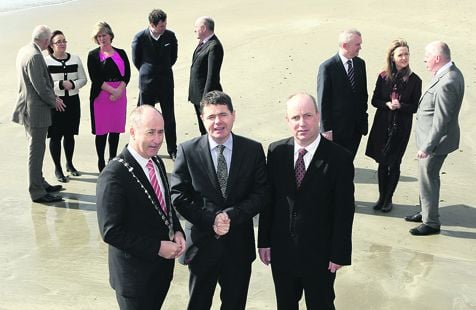 A THREE-pronged approach will be taken to advancing the future of Cork Airport, Transport and Tourism Minister Paschal Donohoe said last week.

Minister Donohoe was in West Cork on the invitation of local FG TD Jim Daly, to attend a meeting on the airport, held at Inchydoney Lodge & Spa.

Among those attending the ‘brain-storming’ session to address falling passenger numbers at the airport were Cork Airport MD Niall McCarthy and marketing manager Kevin Cullinane, and representatives from Failte Ireland and Cork County Council.

After the meeting, the minister said there were three specifics identified to target an increase in visitors through the airport. Firstly, Failte Ireland would, later this month, reveal new branding for the South and East, which would build on the strength of the Wild Atlantic Way. It would focus on heritage, history and food through the region ‘and beyond’, Minister Donohoe told The Southern Star.

‘We will work to ensure that West Cork and Cork Airport feature prominently in that,’ he added.

Secondly, there will be a renewed focus on building new routes, and the Department would support airport management in any collaboration envisaged to bring that to fruition.

And thirdly, an emphasis would be brought on co-marketing strategies between tourism agencies and the airlines.

The type of holiday maker being targeted is the one which is ‘culturally curious and socially energising’, he said. This type of customer would enjoy the food and heritage available throughout West Cork – the type who would also enjoy the great variety of gardens open to the public, for example.

The Cork area would be seen as one of the major marketing exercises to be undertaken outside of Dublin, he said. This approach was also outlined in the meeting with the local West Cork Tourism body which the Minister had earlier attended in Clonakilty, he said. The development of more outdoor activities, greenways, blueways and local heritage offerings were also on the agenda for the region.

‘We need to improve how Cork is marketed,’ he said, explaining that he was very familiar with West Cork, following many holidays in the area. ‘Cork is doing well, but I would like to see it doing even better.’

Deputy Jim Daly, who organised the meetings, outlined that the make-up of Cork Airport’s passengers needed to be addressed also, as the norm in most Irish airports is that the ratio of holiday-makers to domestic users is usually 50/50, but in Cork, domestic passengers account for two-thirds of users.

He said the meeting also heard that the airport would be targeting visitors from four main regions – Scandinavia, Germany, northern Italy and France.

These visitors would be particularly interested in the ‘West Cork product’, Deputy Daly said. ‘We believe there is pent-up demand there,’ he added.

County Mayor Alan Coleman, who also attended the meeting, said it was important that the airport was promoted as an ‘asset’ in the area, and the ‘strategic committee’ now in place would be concentrating on promoting the ‘brand’ of the airport.

Deputy Daly confirmed that there would be another meeting of the group in three months’ time – possibly at the end of June – and Minister Donohoe was committed to attending another meeting before the year’s end.

‘We will pool our efforts, because co-operation is needed,’ the Minister added. Minister Donohoe also addressed recent criticism of the state of the road conditions along sections of the heavily-promoted Wild Atlantic Way. He said he would be pushing for an increase in allocations for regional roads. ‘Funding was cut as a result of the financial crisis but main roads are a priority,’ he said.

Debt is not an issue, says Daly, it’s about upping numbers

A DEBT write-down to alleviate financial pressures at Cork Airport was not on the agenda at last week’s meeting in Inchydoney.

The matter had not come up for discussion at the meeting which was closed to the press, Minister Paschal Donohoe confirmed to The Southern Star.

Deputy Jim Daly, the FG TD who organised the event, said the future of Cork Airport would be secured, not by writing off debt, but by increasing new routes.

He added that top of the agenda at the meeting was the ‘need to better co-ordinate the marketing of West Cork to encourage airlines to develop new routes’ into the airport. ‘I know my colleagues in Government are confident of the future success of this initiative and the potential for the airport and its management team to continue to benefit from the growth in the number of tourists visiting Ireland every year,’ he said.

And he added that he didn’t believe debt was an issue, despite the fact the airport is carrying a €113m shortfall following the construction of its new terminal.

‘I believe that the future success of Cork Airport is not related to any issues surrounding the debt or the old terminal,’ said Deputy Daly, ‘but rather will come about by increased co-operation and focus by the agencies tasked with marketing Cork to the wider European market.

Last autumn, a Facebook page entitled Save Cork Airport was set up – it now has over 23,000 ‘likes’, while an online petition of the same name has almost 2,500 signatures.