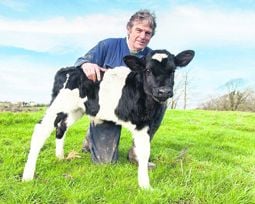 David Cregan with ‘Cassidy’ on his farm in Skibbereen (Photo: John Delea)

GEORGE Orwell, who famously wrote ‘four legs good, two legs bad’ would have had to pause, when ‘Cassidy’, a three-legged Friesian calf was born, just over a week ago.

‘I must admit I was very surprised,’ said David Cregan, a farmer from Ardralla, Church Cross, Skibbereen, who thought his labouring cow was in trouble when the calf’s two front legs did not present alongside the head during the birthing process.

The cow who, unlike her offspring has no name, and is just known in Orwellian fashion as ‘382’ – looked like it was going to be in serious difficulty, but David managed to locate one leg and the calf was born quite easily.

It was only when the bull calf emerged that David realised he had only three legs. ‘I’d never seen anything like it before,’ said David, who rang his local vet, Fachtna Collins, and asked him to check the calf to see if he would survive.

‘Fachtna told me: “Give him a chance, he’s a fighter and will probably do alright” so my wife, Mairie, christened him Cassidy – as in Hopalong Cassidy – and he’s quite at home with us now.’