WEST Cork artists are among those participating in a unique way to raise funds for the Jack and Jill charity for sick children. 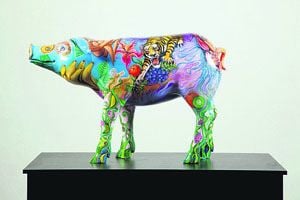 WEST Cork artists are among those participating in a unique way to raise funds for the Jack and Jill charity for sick children.

The ‘Pigs on Parade’ art display will see 100 pieces of pig art which participants will have to located through the streets of Dublin this month and next.

Corina said the inspiration for her pig ‘Pig-cassi in the Garden of Eden’ was the living energy in the paintings of Van Gogh, the surreal conversations in Dali’s wonderful compositions and magnificent techniques, along with the vast spectrum of styles presented by Picasso.

Pauline Byrne, who has worked in the past at the Don Bluth studios in Dublin, has held seven solo exhibitions in West Cork and the Waterside Theatre in Derry.

Commissioned by Jungle City to paint an elephant which is on display in Clonakilty, Pauline also has both private and public collections with the Department of the Marine, Jeremy Irons and Roxy New York. She says she took her inspiration for her pig ‘The Truffle Hunter’ from foraging for truffles through woods.

The pigs are available to be sponsored or purchased from www.pigsonparde.ie and the charity is inviting people to find the pigs, which are individually coded, and to enter a fun competition. Jack & Jill have provided home nursing care for 212 local families with sick children in Cork since 1997.

Participants have to find 20 pigs by using a special code, and they can then enter a draw for lots of prizes, including a weekend break to Inchydoney Island Lodge & Spa for a family of four.