Steve Redmond, the first person to swim from Baltimore to the Fastnet and back, pictured with Noel Browne, Pamela Deasy, Union Hall RNLI and Kieran Collins, Baltimore RNLI, and skipper of the Radiance which carried Steve’s support team. (Photo: Anne Minihane)

One of Ireland’s most successful but least-known sportsmen, endurance swimmer Steve Redmond, never takes a challenge for granted. If anything, the modest man almost seems surprised by his incredible achievements, writes Siobhán Cronin

MOST athletes and extreme sports participants are trained to engage positive thinking before a big event and to affirm their belief in themselves.

‘In other sports, you know your opponent, and you can judge them. In water, you never know what you will face.’

In his new book Fastnet, the final challenge, Steve devotes a chapter to each of the mind-blowingly difficult channel swims, which comprise the Oceans Seven international swimming challenge – the sea equivalent of the Seven Peaks. And before each one, he is convinced he won’t make it. 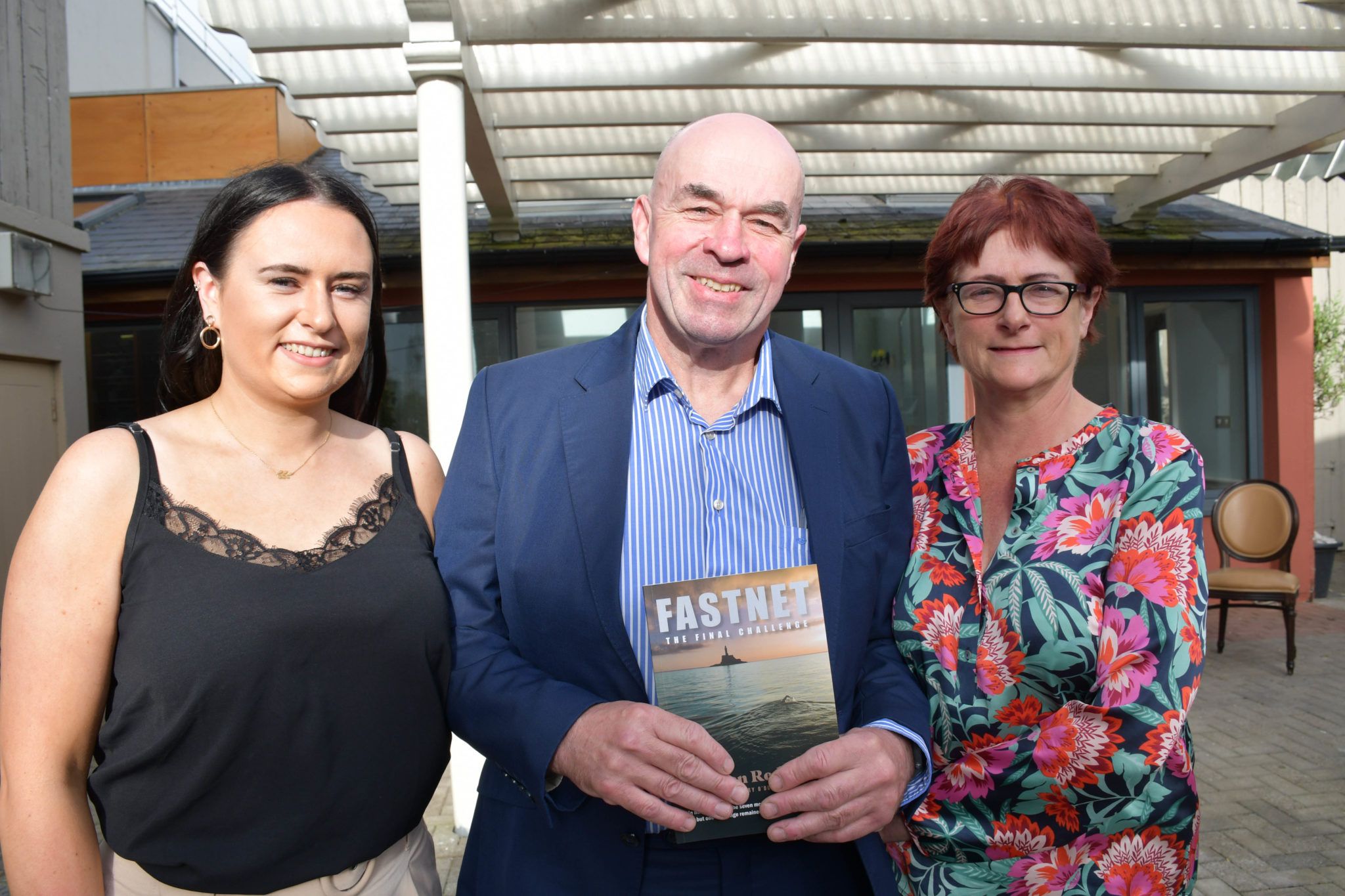 Steve with his wife Ann and daughter Siadbh at the launch of his book in Skibbereen last week. (Photos: Anne Minihane)

The Seven Peaks are: the English Channel, the North Channel (Scotland to Ireland), the Strait of Gibraltar, The Catalina Channel (California), the Molokai Channel (Hawaii), The Cook Strait (New Zealand) and the Tsugaru Strait (Japan).

And not content with conquering those behemoths, last July he became the first person to swim from Baltimore to the Fastnet Rock, and back again, a total of 44km.

Steve says he never takes the sea for granted, and that might just be the secret of his success. 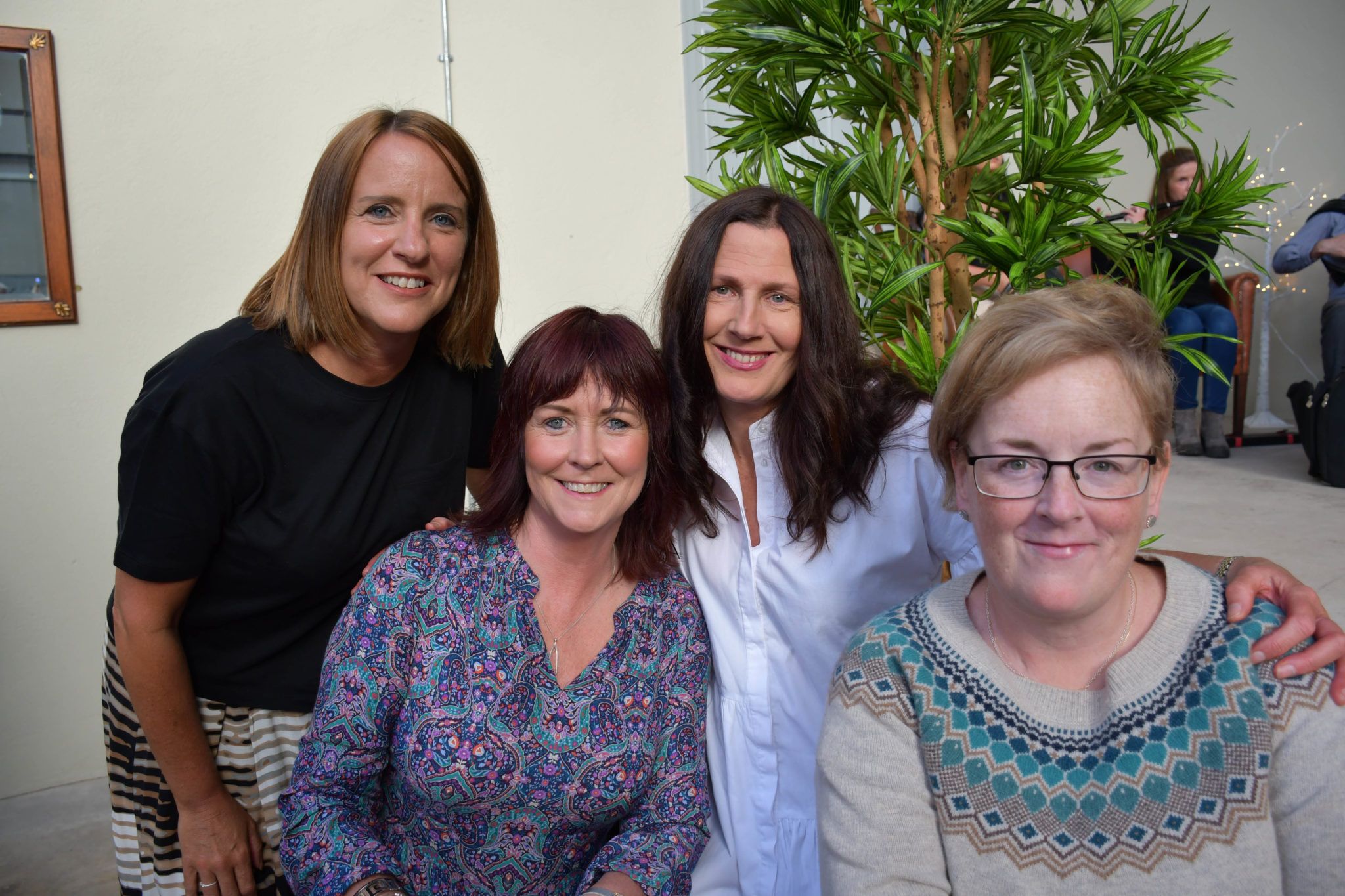 ‘The worst thing you could ever think is “well I deserve this”. The sea will beat the sh*t out of you. Every skipper will tell you – the sea gave you that swim.’

Skippers, he says, are the most important person on the support boat. ‘The best thing with a skipper is to pay them straight away – then they like you! They don’t take any bullsh*t and they know a bullsh*t artist after 30 seconds,’ he says.

In the book you can see the huge bond Steve has with his various skippers and the ones he doesn’t click with are invariably on swims that don’t go so well.

But even ones where he has total faith in his crew, and where everything else runs smoothly, can be difficult in the water. The Cook Strait swim was a case in point.

‘I really thought in New Zealand that they would leave me. They had worked really hard to get me that far. I thought surely to god they will call it, but they said no way mate, touch that rock and we’ll go home.’ 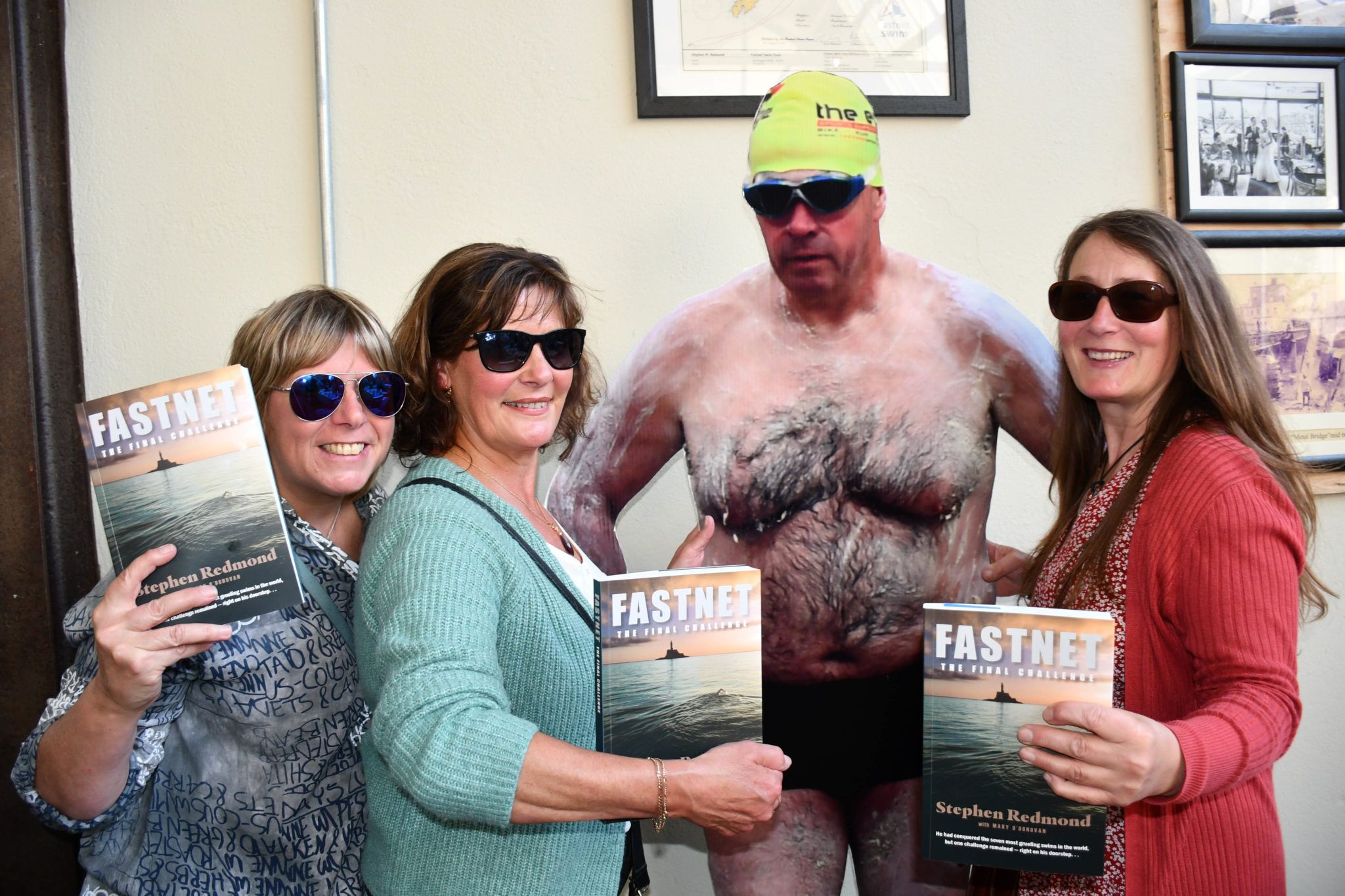 Sonia Taylor and Fiona Begley from Bantry with Karen Connolly, Ballydehob and a cut-out of Steve, at the book launch.

In Catalina he realised he was jet-lagged and at one point he looked up and saw the skipper starting to play the bagpipes. Steve thought he was hallucinating and wanted to stop.

There was a Red Bull team on board filming the whole thing, and one of them let down the ladder – a real no-no because Steve was making straight for it to put an end to his pain.

Just then a member of the support crew, on a paddle board beside him, told him that his kids Siadbh and Stevie had called and were asking why Daddy wanted to stop the swim – that spurred him on to complete the final five hours.

But not before vomiting violently for some time. Then, after some tea and sugar to calm his stomach, he headed off again.

He says most people just don’t realise the absolute horror involved in these incredible feats of endurance and mind over matter.

‘They don’t see what happens out there, they only see you getting on a boat, and then clamouring ashore afterwards.’

As well as battling blistering sun, wind, currents, predators and often thousands of jellyfish at a time, you are also battling your own body and mind, telling you it can’t be done.

His book allows the reader an incredibly detailed insight into exactly what happens ‘out there’.

It’s an intimate insight into everything from the training and feeding regime, to the logistics of getting to these often remote locations and back, the warmth of the subsequent relationships built through sheer trust, and the joy of achievement.

‘From the very start, I have been keeping journals of absolutely everything that happened. I had no intention of writing a book. You could say, it’s been written for years,’ he explains.

Apart from the final chapter, of course. The Fastnet. The return swim from Baltimore could yet prove to be one of the world’s most iconic, and already several keen sea swimmers have completed at least one leg of it, with plenty more booked in, on trips run by Steve’s long-time confidantes and fellow swimmers Noel Browne and Steve Black.Married to the long-suffering Ann, Steve makes no bones about his emotional disposition, as readers will discover, and seems genuinely surprised by the level of support during the swims and at his recent book launch.

‘Every single person in that room that night contributed something to me,’ says the London native, who moved to Ireland with his parents, as a child.

He kneels and prays on the boat before every major swim he undertakes.

It looks like he may be praying again this summer, then, because his ‘lunatic’ friend Kieran Collins has suggested swimming all the way from Baltimore to Mizen Head, and you can see by Steve’s smile that he is definitely considering it. ‘Well, I’ll be back training this week from 4.30am in Lough Hyne,’ he says, so you know there is some plan in the offing.

A measure of this incredibly humble and polite man is evidenced by a lovely touch at the book launch. In each copy, he has included a book mark with a picture of Lough Hyne Lapper and friend Declan Newman, who passed away at the lake just a few weeks before.

Referring to his own love of the sea, he tells the audience: ‘We are still on the road. I don’t know where this is going, but I will keep going, as long as I can go.’

• Fastnet: The Final Challenge is available in local bookshops, priced €20.