Some of the rubbish left behind by the weekend's revellers 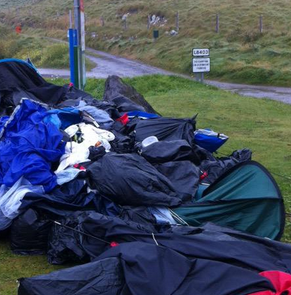 Some of the rubbish left behind by the weekend's revellers

LOCALS have expressed disgust at the events in Crookhaven at the weekend which saw up to 200 city teens ‘invading’ the seaside village.

Gardai are also investigating an alleged assault on a young girl in a campsite in the area on Saturday night.

Over 30 bags of rubbish were collected by the Council on Monday, and a remarkable clean-up job was undertaken by locals and Council staff.

It is believed that several young people, from a number of Cork city schools, arrived in the village on Friday night and Saturday morning, for a summer get-together which was largely arranged via social media.

Many arrived by public transport, as Friday night’s buses from Cork city were packed with young people, and others were dropped off by their parents.

However, almost all of the teenagers brought large amounts of drink with them and gardai were called by local business people who quickly realised the situation was getting out of hand as the teens appeared to go 'on the rampage' as one observer put it.

The teens were stopped from entering the pubs in the village, but many of them congregated at Galley Cove outside Crookhaven, near Mizen Head, and proceeded to party until the early hours.

Some locals said the weekend was reminiscent of similar large scale parties organised by schoolchildren from the city, which took place in the 80s.

Pre- Leaving Cert get-togethers are becoming more common in recent years, but many of the children involved in the weekend’s fracas are believed to be younger than Leaving Cert students – ranging in age from 15 to 17 in most cases.

Some locals said the incidents cast a shadow over the weekend’s regatta events in nearby Schull.

A full report on the weekend’s events will be carried in this week’s Southern Star.