The junction between New Street to Wolfe Tone Square in Bantry under water after Storm Francis hit the south west. (Photo: Denis Boyle)

A FULL year has passed since Bantry experienced one of its worst flood events ever when – on August 24th and 25th 2020 – more than 50 businesses were under water.

Indeed, that wasn’t the only flood event in Bantry last year. There was further flooding in October – when 27 properties were flooded – as well as November and December.

Now, however, members of the local business association are pleased to report that they are working in close co-operation with the Council to bring two major and one interim projects to completion.

Bantry Business Association (BBA) chairman Diarmaid Murphy reported that they have had a number of productive meetings with Tim Lucey, chief executive of Cork County Council, divisional manager Clodagh Henehan, as well as senior administrative and engineering staff, who are hoping to deliver the three projects within the next few years.

According to Diarmaid, the BBA has seen progress, such as the completion of the survey of the town’s subterranean culverts, and the ongoing monitoring of the situation, pending the competition of design works for its eventual upgrade.

Although the second project – the proposed €6.5m flood relief project for the town – is still a few years off, Diarmaid said the community is heartened by the fact that they are receiving updates from the Council about all the steps being taken to ‘get their ducks in a row.’

Better yet, the community has received assurances from Finance Minister Michael McGrath and the junior minister Patrick O’Donovan that funding for the inter-departmental projects is available. 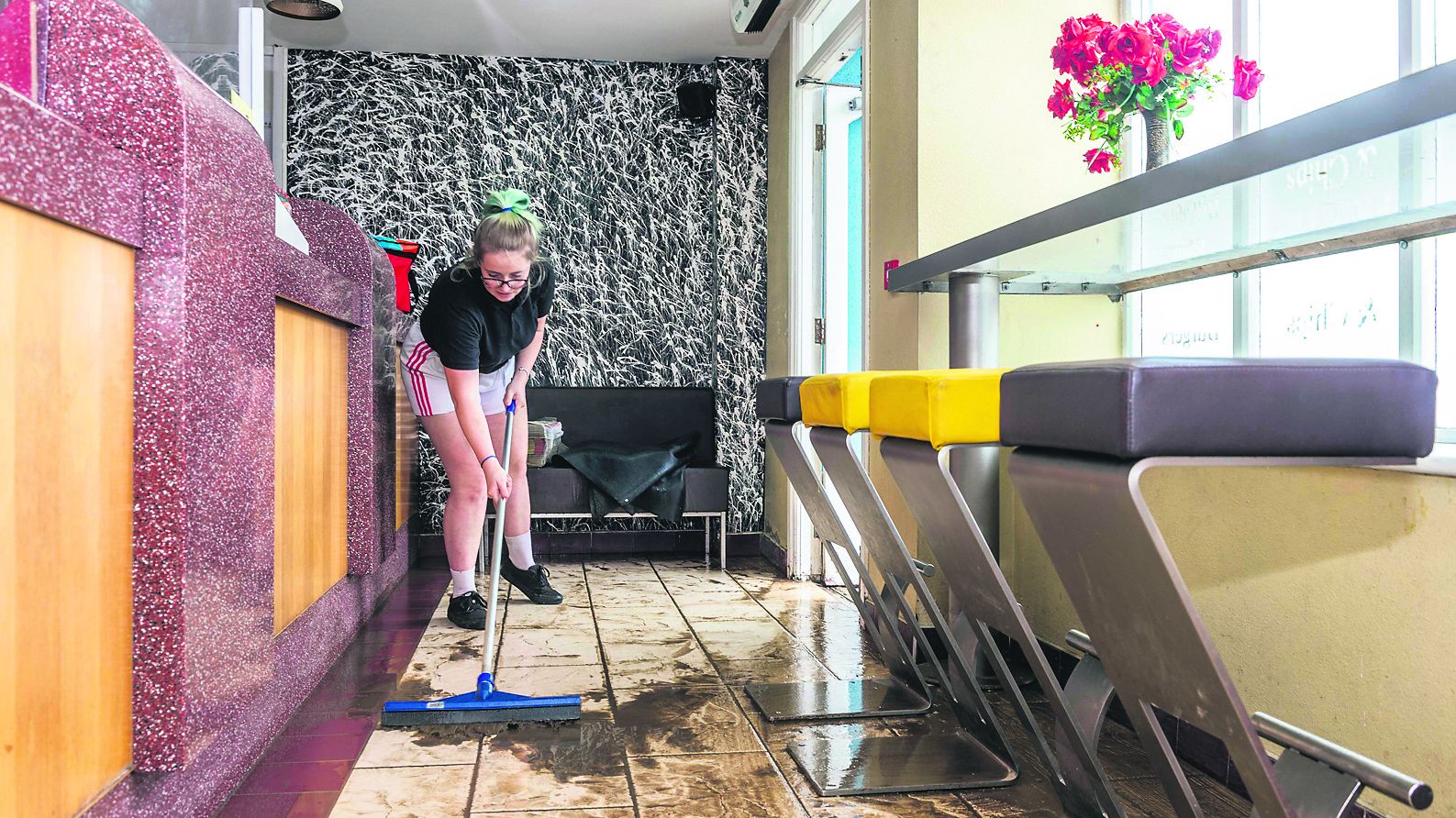 Cleaning up in the Bay Diner after the storm was Jillian McCarthy. (Photo: Andy Gibson)

In a town that has been hit by both tidal and surface water flooding, there is also a third project – an interim flood relief project – proposed for the quayside in Bantry.

The Council has sought funding for an interim measure – under the auspices of the Office of Public Works – to contain water at the quay sides.

The project, if approved, could potentially help protect against tidal flooding, especially when there are spring tides, storm surges and other extreme weather events.

Meanwhile, Diarmaid said homeowners and business owners in the worst affected areas have installed flood prevention barriers and there is an understanding that the Office of Public Works will retrospectively cover the cost of these additional interim flood relief measures.

The third project – the one at the quay side – will be subject to a public consultation process, which Diarmaid said locals find reassuring because no one wants to see work done that could have a negative visual impact at the harbour wall.

Cork County Council has also received praise from the association because it has, since August 2020, been ‘very helpful’ and done a lot of work to facilitate outdoor dining.

‘The amount of tourists commenting on the al fresco dining facilities is encouraging,’ said Diarmaid, who is happy to see so much of Bantry’s outdoor space put to good use.

The town is fortunate to have a huge plaza – Wolfe Tone Square – right in the middle of town, but the junction at New Street, too, lends itself to a positive outdoor vibe, as do the numerous nooks, crannies, and alleyways, like Bridewell Lane.

‘Since we’ve all moved outdoors,’ Diarmaid said, ‘we have found that Bantry is particularly well suited to open air dining. That’s something that has been backed to the hilt by the Council and businesses in Bantry are surviving because of it.’ 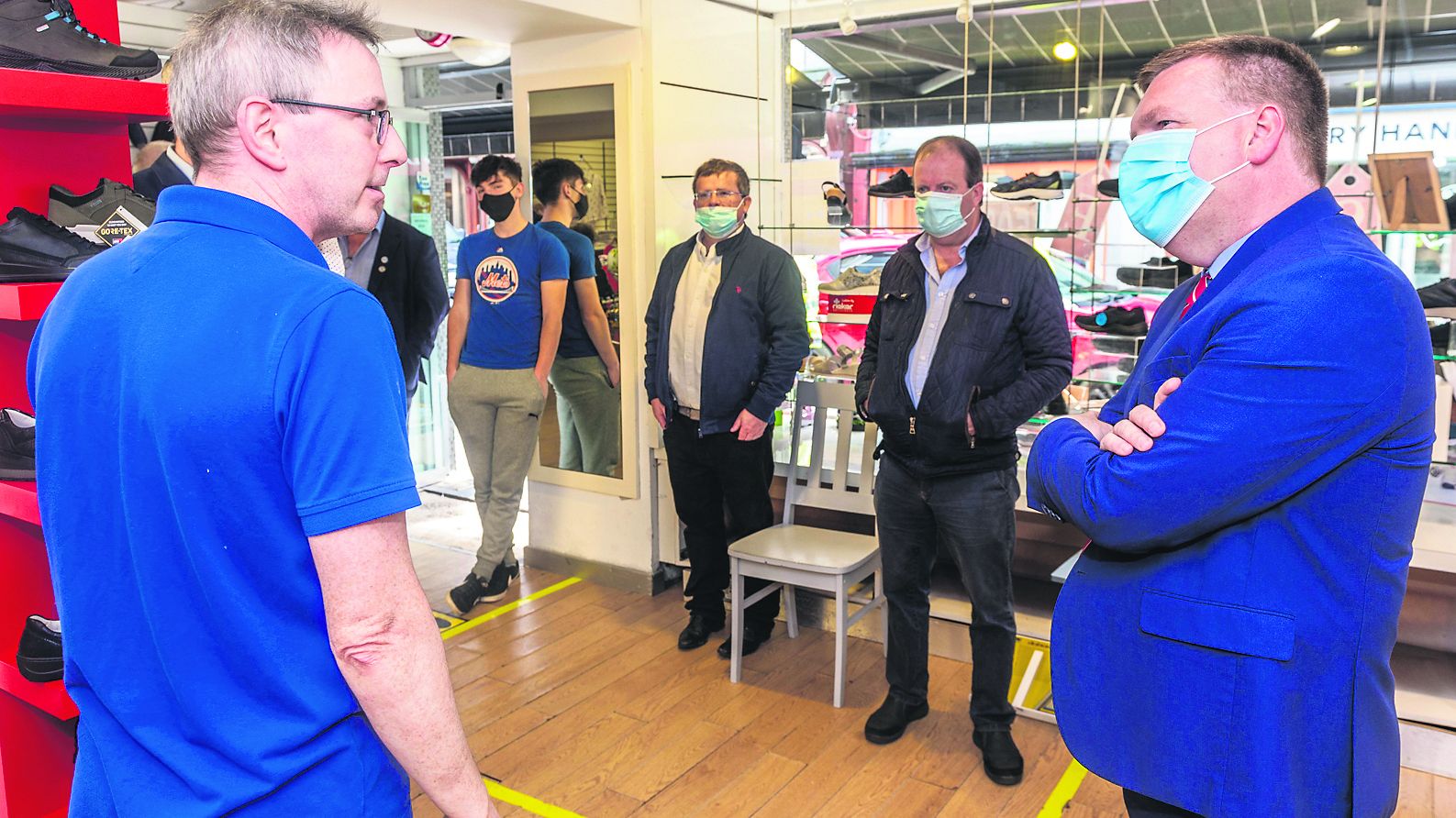 CORK County Council has set out in detail the actions it has taken since the flood events of August 2020 in Bantry.

With last week’s two climate change reports (one from the Intergovernmental Panel on Climate Change and the second from Ireland’s Environmental Protection Agency), both predicting further flooding and rising ocean levels, there was not much reassurance for the people of West Cork.

County engineer Kevin Morey confirmed that the local authority is continuing to progress a major flood relief scheme for Bantry, in conjunction with Office of Public Works (OPW), which is the statutory and funding authority for flood projects in Ireland.

The tenders for consultancy services for the scheme were received last month, on Friday July 30th, and are in a process of detailed assessment, in order to appoint the successful tender.

The engineer also outlined the conditions that led to the August 2020 flood events.

It was caused by severe surcharging of the main culvert which runs through the centre of the town, due to the inadequate capacity of the culvert.

This led to backflows of flood waters in sewers and drains, which are connected to the culvert, along with flows though the culvert manholes, joints and cracks, leading to serious flooding in the town.

The flooding was due to intense rainfall in the area. The total rainfall recorded in Bantry on August 24th 2020 was 50mm, with intense rain falling over a five-hour duration from 6.40pm to 11.30pm.

The Council intends to progress a major project to replace and/or rehabilitate the existing storm culverts, which traverse the centre of Bantry, in parallel with the main flood scheme, with funding from the OPW and Irish Water, along with some support from Transport Infrastructure Ireland (TII) as well.

In addition, the Council has made an application to OPW for funding for interim flood mitigation measures, in order to provide interim flood relief for Bantry, pending the development of the major scheme.

These interim measures include non-return valves on gullies and storm sewer pipes, to prevent storm water flowing onto the streets.

They include the provision of additional mobile pumps and a pump sump chamber to assist with flood mitigation during a flood event, by keeping flood waters away from properties.

Another measure would be the provision of large sandbags to temporarily block gaps in the quay walls to mitigate tidal flooding, by slowing down ingress of tidal flows into Wolfe Tone Square.

Discussion on all of these matters, between Council and the OPW is, according to the county engineer, ‘at an advanced stage’.

The Council has also placed large sandbags at Sands Quay in advance of high tides or storm events, and mobile pumps have been hired for a swift response.

Detailed reports from expert consultants have been commissioned by the Council, including flood event reports and structural and capacity reports on the culvert system in the town.

The Council said they have been intensively engaged at a local level to mitigate flooding, through the provision of additional items, such as sandbags and extra mobile pumps.

The Council also finds itself permanently on standby when flood events are likely to arise, such as high spring tides, especially if they coincide with storm surges or heavy rainfall.

Local Cllr Danny Collins (Ind) commented on the ‘heartache’ the flooding caused for businesses and residents and said a flood relief scheme for Bantry was approved in 2018.

‘Since then,’ he said, ‘surveys been carried out by the OPW in conjunction with Cork County Council. I have requested that a contractor be appointed as soon as possible,’ he added, ‘because the people living and working in Bantry town centre are living on a knife edge.’