Staff of Prenco Manufacturing Ltd on the Baltimore Road in Skibbereen, who recently celebrated their anniversary 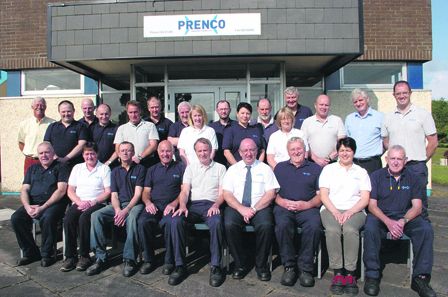 Staff of Prenco Manufacturing Ltd on the Baltimore Road in Skibbereen, who recently celebrated their anniversary

At the same time, the 40-year anniversary was reached of the start of the business on the same site in Skibbereen, by the original Deutsche Star Company of Germany in 1974.

The original business in Skibbereen, remembered by many locals as Starball, was transformed from a branch of a German multinational into the private Irish SME business (Prenco) following a buyout in 2004 by the current owners, Skibbereen-based Leo Werner and Limerick-based Ger Lyons.

Prenco manufactures and sells a large range of precision engineering parts for use in industries such as linear motion, automation, filtration and cargo handling in the airline and railway industries.

To celebrate the dual 10/40 year anniversaries, Prenco decided to hold a celebration for staff, which took place at the Liss Ard Estate in Skibbereen on Friday July 17th.

Prenco employs 25 staff in Skibbereen, many of whom remain in service since the Starball days. From the total of 25, no less than 14 employees have more than 20 years’ service and of those 14 there are eight employees with more than 30 years’ service.

General manager John White said the skillsets of the long-serving employees are crucial to the company’s activities, due to the precise nature of the work involved in the manufacturing and quality control processes in-house.

Co-owner and managing director Leo Werner commended his company’s workforce by saying: ‘A company is only as good as its workforce. We are fortunate to have a skilful, quality-conscious, dedicated, and co-operative team of employees which makes us look confidently to the future.’

Whilst acknowledging the historical achievements of the company, Prenco is actively looking to the future and is investing heavily in new machines, new processes and new staff to both retain existing skills and business, whilst producing new parts for a growing customer base.