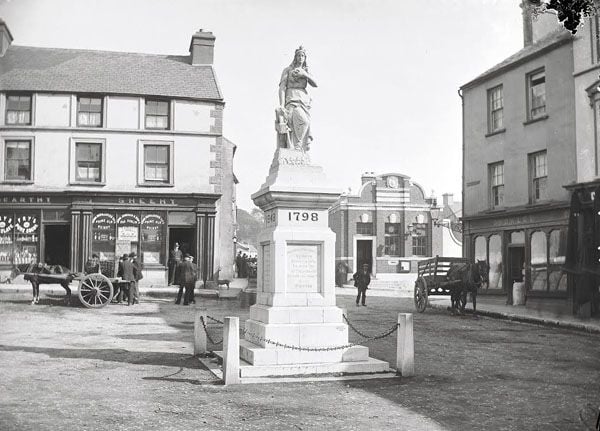 One hundred years ago, on 8 March 1915, a most peculiar will was read out in a Dublin law court.

The will belonged to Timothy Driscoll from Skibbereen who had died on 28 January, aged 74. For many years he had been doing well selling flour, cream, butter and eggs from his shops in Lower Bridge Street, Skibbereen, and his outlets at Clonakilty and Ballydehob.

By his own confession, his will was ‘different from ordinary ones’.

For a start, he admitted not knowing what he owned, apart from his business premises, two fishing boats, and a couple of farms. There were various securities and shares belonging to him in the Bank of Ireland, money he had lent customers, and debts - though he hadn’t a clue how much these came to.

His wife, Ellen, was already dead, and his family naturally expected him to divide up his estate between his sons, daughters, nieces and nephews. Unhappily for them, that was not to be the case – and Driscoll was determined to put on record why not: ‘I think it proper to explain why I do not give all to my family. Well, this is the reason … I owe little, if anything, to my children, who I consider provided for already as much and more than they deserve. I owe them no love. They gave me none. The only real friends I had in my life were my wife, my brother, and my father …’

In the years immediately before his death, Driscoll had been living in Cardiff where he had come across a utopian novel titled Equality, written in 1897 by the American socialist Edward Bellamy. It had kindled in him a passion for democracy and Christian Socialism – what he called ‘the most perfect form of social life’ where wealth is distributed among people equally.

The book tells the story of millionaire loafer, Julian West, who found himself ‘seized with an overmastering desire to roll up his sleeves and do something towards rendering an equivalent for his living.’ Driscoll seems to have undergone a similar conversion. It dawned on him that the capital he had accumulated from his business was, in reality, theft. Pricked by a new social conscience, he started to ponder his mortality.

In his will of 1910, he insisted that his funeral be a simple affair, without priests, that he be buried in a plain coffin, and that he have no gravestone.

Everything he owned was to be bequeathed in a morally responsible way. Heading his list of bequests was £1,500 to three hospitals for poor men in Cork; and £1,000 for annual lectures on Christian Socialism, based on Bellamy’s ‘great work’ Equality that had so inspired him.

To the Little Sisters of the Poor he left £500; and, if there was after paying off his debts, the surplus was to be given to the Penny Dinner Fund in Cork City.

Small sums were begrudgingly set aside for his estranged sons Denis and Timothy, £300 and £500 respectively; and a further £500 for his three daughters to share between them. In return for his pittance, Denis was expected to manage the properties carefully and check that accurate accounts were kept.

As it turned out, Driscoll had massively undervalued his debts that amounted to £20,000 – completely wiping out his assets. His business had to be wound up. There was nothing left for poor relief, certainly nothing for buying penny dinners for Cork’s poor, not even the meagre sums he had allotted to his family. Skibbereen flour merchant Timothy Driscoll was stony broke.