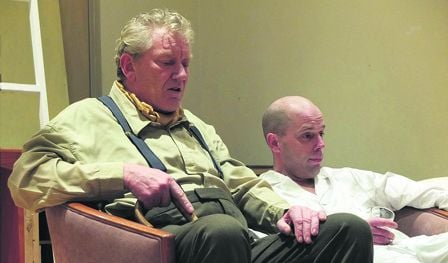 Donagh Long and Louis Jacob in the Baltimore production of 'Cat on a Hot Tin Roof.' 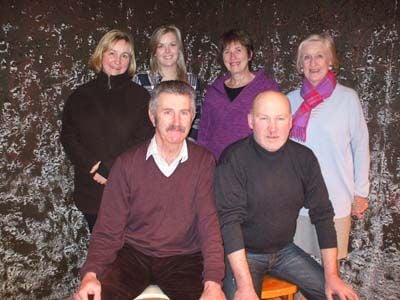 SKIBBEREEN Theatre Society will be putting on two final local performances of their award-winning production of Family Plot by Darragh Carville early next week.

The shows will be performed at Skibbereen Town Hall on Easter Monday, April 6th, and again on Wednesday 8th, with curtain at 8pm each night. Tickets are available in advance through Thornhill Bros Electrical, Skibbereen, tel 028-22557.

They will be taking part in the All-Ireland Confined Drama Finals in Kilmuckridge, Co Wexford, on their opening night, Friday, April 10th. The festival continues until Saturday 18th when the overall winners will be announced by adjudicator Patrick Sutton.

Set beyond the grave, this darkly-comical piece features four generations of the dysfunctional and dead Kerr family, Aunt Lizzie (Angela Galvin), Da (Ger Minihane), Ma (Catherine Field), Frank (Fachtna O’Driscoll) and Tess (Carmel O’Driscoll), who didn’t get on in life and they certainly don't get on in death! They are about to be joined by the youngest, Emer (Isobelle Nealon).

Directed by Hilda Hegarty and Fachtna O’Driscoll, Family Plot won four festivals on the amateur drama festival circuit and finished second in the other three they entered to qualify comfortably for the All-Ireland finals. Their main opposition will be Doonbeg Drama Group with The Price by Arthur Miller, which had six wins and one second on the circuit.

‘Cat on a Hot Tin Roof’ by Tennesse Williams is the lateset offering from Baltimore Drama Group, directed by Olan Marten. It will be performed at Baltimore Community Hall, at 8pm this Easter Saturday and Sunday, April 4th and 5th.

There will also be performaces of it at Skibbereen Town Hall next Thursday and Friday, April 9th and 10th. Please note it is suitable only for over-16s.

This year’ s play is a modern classic and Olan Marten directs one of Williams’s most known plays, set in a family estate in the Mississippi Delta. The play tells the story of the dysfunctional, but wealthy, Pollitt family as it comes together to celebrate aging patriarch Big Daddy’s (Donagh Long) 65th birthday.

But there is more to this gathering than a family reunion – Big Daddy is dying of cancer, and he hasn’t decided which of his sons will inherit the estate. His options include favorite son Brick (Louis Jacob), who drinks himself into oblivion in order to bear the oppressive expectations of his determined wife, Maggie (Juliet Hone), or his less-favored son Gooper (Olan Marten) who is married to Mae (Sheelagh Broderick).

Also featuring in the production are Nuala Gibbons, Declan Tiernan, Pat Flaherty, Bronwyn McEwan and Ciara Dempsey. This play is suitable only for over 16s.