BY JACKIE KEOGH THREE years ago, Tracey Wood Wolfe courted the media - both locally and nationally - because she was desperate to get medical support for her son, Lorcan, who has Juvenile Idiopathic Arthritis. 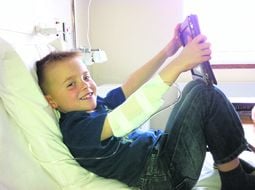 Lorcan Wood Wolfe, from Skibbereen, has to travel to Dublin for specialist treatment that is no longer available in Cork.

THREE years ago, Tracey Wood Wolfe courted the media – both locally and nationally – because she was desperate to get medical support for her son, Lorcan, who has Juvenile Idiopathic Arthritis.

Lorcan – who has the rarest and most severe form of JIA, a condition that is systemic in that it affects his joints and his organs – was six years old at the time.

‘He was diagnosed with the condition at the age of four and we, as a family – my husband, Justin, my daughter, Roisin, and I – had two very difficult years trying to get the best medical care possible.

‘As bad as that was, the situation got a whole lot worse in November 2011 because at that time, we, and other families of children with JIA, were left without a consultant paediatric rheumatologist because the doctor’s maternity leave was not being covered by the Health Service Executive.

‘By Christmas – due to the level of media coverage and the pressure that the HSE was put under by frustrated parents – the situation was resolved when a doctor was brought in from Temple Street to cover two days a week.

‘What that meant,’ said Tracey, ‘was that our son, Lorcan, was able to receive Tocilizumab, an IV biologic drug, which he has to receive every two weeks to keep his condition under control.

‘Now, three years later, we are in a situation – despite the existence of two specialist doctors in Dublin – that is actually worse because the waiting lists have grown significantly. ‘The situation is exacerbated by the fact that these two doctors are being made to cover general paediatrics, as well as A&E, instead of being able to just focus on the rheumatology department.

‘Normally, we, as a family, travel from our home in Skibbereen to Dublin every six to eight weeks with the intervening treatments being administered in Cork University Hospital, but that is conditional on Lorcan’s health being stable,’ continued Tracey.

‘Now, once again, my family is in the media spotlight because we – like the other families dealing with this awful situation – want to highlight the fact that there is a need for a specialist facility in Cork due to the amount of families in this area that the need the service.’

Tracey explained that a trip to Dublin takes five hours each way because Lorcan needs rest breaks for movement because of the amount of pain that sitting still for so long can cause him – not to mention the financial burden it places on the family.

Tracey is adamant that there is ‘a need for another paediatric rheumatologist in Ireland, but especially in Cork, where it is estimated that there are at least 25 families in need of this specialist care.’

This busy mother of two, who is also a full-time special educational needs teacher, is one of the founding members of a new support organisation called iCAN, which stands for the Irish Children’s Arthritis Network.

Tracey said: ‘The organisation was set up in October 2013 by four angry, frustrated and desperate mothers who are determined to secure the medical support families need.’

The organisation has also established a iCAN Facebook page, which Tracey described as being ‘a lifeline because it allows families to connect with each other – and that is extremely important because you need to be able to speak to someone who knows exactly what you are going through.’

The stated objective of iCAN, according to Tracey, is to secure another paediatric rheumatologist to run a clinic in Cork. With children facing a two and a half year waiting list for a first appointment with the doctors in Crumlin, Tracey said: ‘This would ease the load on the clinic in Dublin, but also make the lives of families in Cork that bit easier.’