Olive Jennings and Andrew Coleman of Christian Aid who will carry the firewood during the Sheep's Head hike. 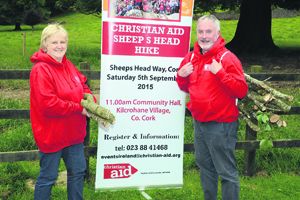 Olive Jennings and Andrew Coleman of Christian Aid who will carry the firewood during the Sheep’s Head hike.

MORE than two dozen walkers will carry bundles of firewood across 14km of tough terrain on Sheep’s Head in a bid to raise thousands of euro for people in Ethiopia.

The walk, next month, emulates the daily trek of an Ethiopian woman who collects wood for a living.

Described as ‘challenging’, the five-hour walk will take the 14 firewood-carrying hikers and other walkers across the spectacular landscape of steep hills and wild coastal terrain.

Walkers are now being sought to participate in the event, which aims to raise more than €8,000 for the charity Christian Aid’s work in Ethiopia.

‘We want to raise this money, which is the equivalent of buying 40 heifers,’ said Bandon-based Andrew Coleman, Christian Aid Fundraising co-ordinator for the Republic of Ireland, who is currently organising the event, known as the Christian Aid Sheep’s Head Hike.

Coleman hopes that the event, which has become increasingly popular in recent years, will this year attract more than 180 people and raise more money.

‘We are looking for experienced hikers to take part in the wood-carrying,’ he said, adding that the other hikers can choose between a 14km hike and a shorter 5.5km trek, on Saturday September 5th.

‘Last year was our largest walking event, with many new walkers on a wonderful day and we are hoping that this year will be the biggest and most enjoyable on this annual and very enjoyable and fundraising hill hiking event,’ said Andrew, adding that this year it’s hoped that more people will walk in solidarity for Ethiopia and to raise funds for the work of Christian Aid partner HUNDEE.

The hike captures all the beauty of West Cork’s scenic Sheep’s Head Way,” said Andrew, who explained that HUNDEE is an indigenous grassroots development organisation in Oromiya State in southern Ethiopia.

It supports poor rural communities, especially women’s groups, operating a system of distributing heifers to women and families in a bid to offer them a better quality of life and a sustainable future by operating small business.

The firewood-carrying walkers will mirror the efforts of Loko, an indigenous Ethiopian woman who walks alone for eight hours a day, gathering firewood to sell, so that she can feed her children.

‘It’s a job she dreads, but she has no choice – she must continue, week after week. If she doesn’t, her children will starve,’ says Andrew, adding that her gargantuan efforts only raise enough money to give the children one small meal a day.

‘Loko dreams of owning a cow one day to have the means to save enough money to set up a small business. ‘HUNDEE operates such a system of distributing heifers to female-headed households, such as that of Loko,’ he explained. Andrew explained that each walker would raise €206 in sponsorship.

If walkers reach the €8,240 target, the Sheep’s Head Hike will raise enough funds to purchase 40 heifers and transform the lives of many families.

Registration for all walkers is from 11am, in Kilcrohane Community Hall on Saturday September 5th.

Hike Route 1 is a 14km four-and-a-half hour trek in which walkers will include 14 people carrying bundles of wood.

Hikers will be taken by coach to the Black Gate, from where the walk begins.

Hike Route 2 is a 5.5km walk which begins after walkers are bused to the Black Gate and takes an estimated two-and-a-half hours.