Locals fear the jagged rocks near the pool could result in an accident there.

AN appeal has been made by locals in Tragumna for people not to attempt to access a rock pool that has become a viral hit on social media.

The pretty rock pond was once a hidden swimming gem for locals, but access was recently closed off because of an influx of people who are unaware of its dangers.

A resident confirmed there were 20 cars parked on the side of the road last Sunday, forcing traffic into a single lane on the already narrow coastal road. 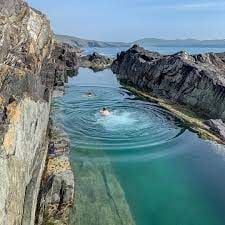 The picturesqe pool caught the interest of many on social media.

The pool has become a social media hit after it was posted on several sites, including Tik Tok, Pinterest and a popular tourism page on Facebook.

Locals say that tourists attempting to find the location are creating an obstacle for emergency vehicles, but they are also afraid that the way the pool is being used could result in an air ambulance rescue.

One resident said that for many years a small number of local people used the natural pool, but the recent influx has also caused litter issues in the area.

An appeal was made this week by several residents for people to avoid the area and not attempt to swim in the pool. Various comments were also posted on social media about the variety of similar swimming locations around West Cork, which have relatively easy and safe access, such as Simon’s Cove on the Seven Heads peninsula and other locations along the Haven coast.