Photos courtesy of the National Library of Ireland

On a breezy night 100 years ago, the Fastnet Rock lightkeeper was taken completely unawares as a group of West Cork men stole gun cotton and detonators and disappeared into the dark night, writes Daithi Fallon

ANYONE who watched the excellent RTÉ series Great Lighthouses of Ireland will appreciate the isolation, wildness and violent hostility visited by the sea on our lighthouses.

The Fastnet Lighthouse is located on Fastnet Rock, the most southerly point of Ireland, lying four miles southwest of Cape Clear Island.

‘Ireland’s Teardrop’, so named because it was the last piece of land some emigrants saw en route to the US, is often battered by waves striking 100ft or more, up its 177ft height.

The highest wind speed ever recorded in Ireland (191km/hr) was recorded there during Storm Ophelia in 2017.

The name will be forever associated with the maritime disaster of August 1979 during the Fastnet yacht race, when a force nine storm hit the fleet of 303 yachts and 19 sailors lost their lives. Lighthouse keepers were often stranded awaiting supplies and fuel for days or even weeks because of the unforgiving sea.

Even in benign conditions, the heavy swell of the sea makes landing on the Fastnet very difficult, which makes the story of the IRA’s Raid of June 1921 all the more remarkable.

By 1921, opportunities for the IRA to raid for arms and explosives had almost dried up. All small, vulnerable RIC barracks in West Cork had been closed.

The incidents of ambushes had diminished, as Crown Forces now only moved about in large numbers.

Even the shooting of spies and leaving their bodies on lonely roads often failed to entice the Black and Tans or military out of their barracks.

Lighthouses needed gun cotton and detonators for fog signals, but that material could also be used for the manufacture of road mines. The IRA were constantly trying to improve their explosives capability.

Frequently, they failed to breach the walls of barracks because explosive devices did not work. Gun cotton was difficult to store and the nature of many IRA dumps meant it deteriorated in damp conditions.

Knowing how sought-after it was, the British began to store excess gun cotton in lighthouses rather than on the Irish mainland. 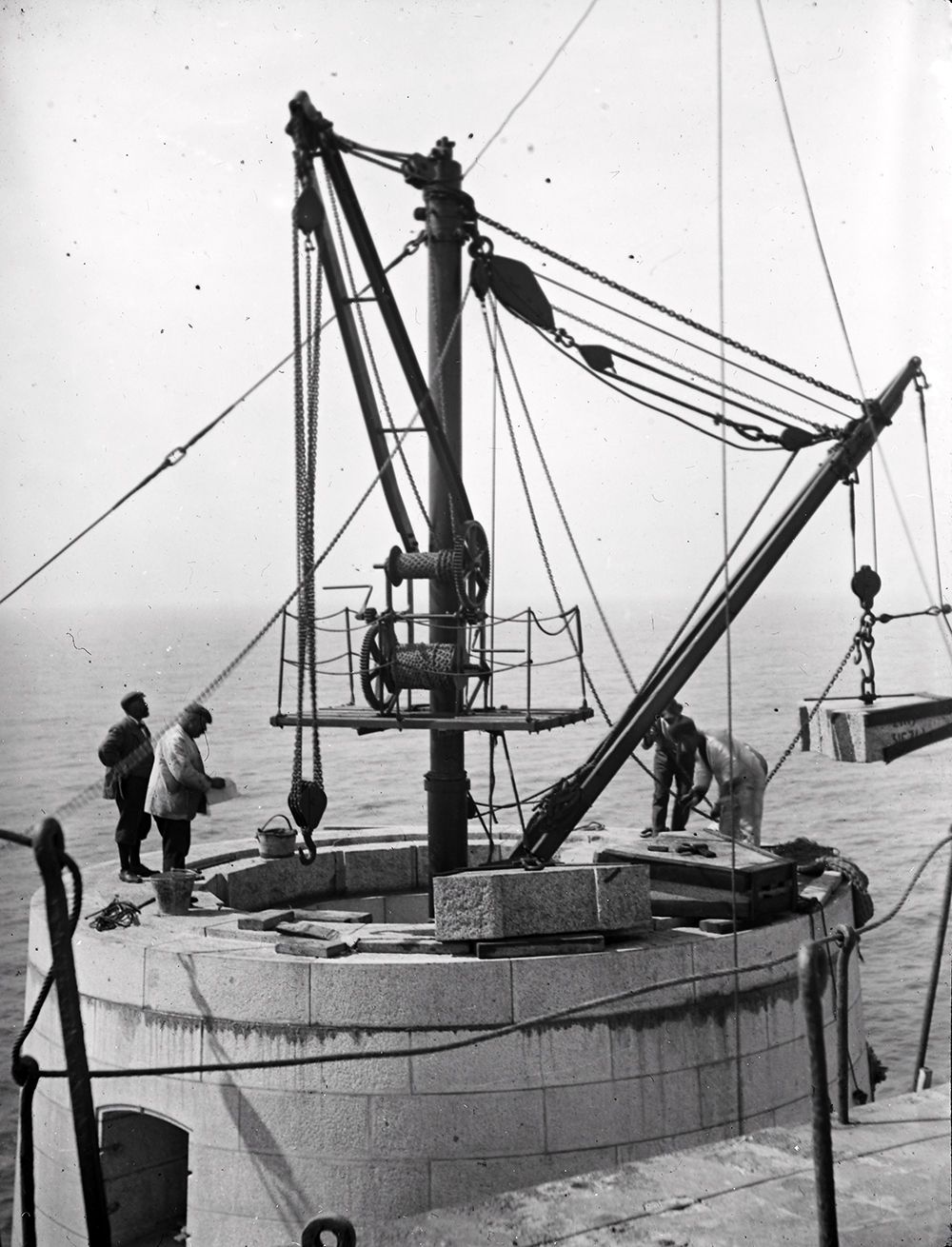 Photos courtesy of the National Library of Ireland

The presence of large amounts of gun cotton in the Fastnet Lighthouse became known to the IRA in West Cork. In mid-June 1921, Sean Lehane, commanding officer (O/C) of Schull battalion, assembled a small crew of IRA and fishermen on Cape Clear. Included was the O/C of Ballydehob company, Seán O’Driscoll.

Their quest had been postponed the first evening due to the rough sea, but on the night of June 19th they watched a British warship on its daily patrol come from Mizen Head, circle around the Fastnet and head back to Castletownbere.

The Máire Cáit left the north harbour of Cape Clear at about sunset and made for the rock. They could claim to be on a normal fishing mission if intercepted.

Approaching the rock around midnight, it was then that the expertise of the seagoing men on board was most needed. As O’Driscoll stated in his witness statement to the Bureau of Military History: ‘The breeze had freshened and caused the usual swell around the Rock and there was a rise and fall of several feet … Positioned on the bow was John O’Regan, a rope tied around his waist, a revolver in his pocket and balancing himself with the rise and fall of the boat. He would have to select the right moment to jump on the Rock ….’

On a rising wave ‘with the bow high over the landing place’ he leaped from the boat into the darkness and onto the landing platform. He quickly found the iron ring, pulled the boat in and tied it up. O’Regan was also first through the open steel door of the lighthouse and up the circular stairway where the keeper attending the light was caught totally unawares.

The ‘booty’ was swung onto the boat using the fixed derrick (hoist) on the landing platform.

A half hour later they were back on the sea heading to Leamcon near Schull harbour. There was a momentary ‘flutter of excitement’ when the lights of the British destroyer appeared, but then disappeared as they were making their way through the Long Island channel.

In a few more minutes the illicit cargo was safe on shore and, within a few days, the gun cotton was being distributed to IRA units throughout West Cork.

On a relatively benign midsummer’s day it was mission accomplished, but not without tension and danger – so typical of the iconic but often treacherous Fastnet Rock.