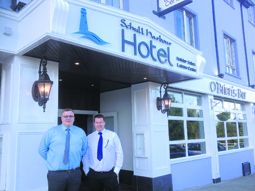 AFTER investing heavily in buying Schull’s Harbour Hotel and apartments and completely refurbishing them, US investor Joe O’Brien is bringing new life to the popular seaside town.

Hotel manager Paul Cullinan, who was responsible for the 12-week transformation of the building that had been idle for five years, told The Southern Star that his boss arrived in Schull at 5.45pm on the Friday of the June Bank Holiday weekend with just 15 minutes to spare for the opening night celebrations.

It wasn’t just the boss who gave the new restaurant, The Wharf Bistro, O’Brien’s Bar, the Leisure Centre and the holiday suites the thumbs up, the entire town turned out to celebrate the welcome re-opening.

‘Denis Cullinane from Goleen, a former owner, was the obvious choice for a quick turnaround,’ according to Paul.

‘He knew the building and did an excellent job in finishing the new restaurant and bar, as well as the 29 bedrooms and the eight, self-catering holiday suites.’

Membership for the spacious leisure centre – complete with pool, fully-equipped gym, sauna, steam room and treatment rooms – will be available when it opens at the end of June, but Paul said: ‘We will also be offering pay-as-you-go options, to look after our visitors during the summer months.’

The re-opening of the hotel is, according to Paul, ‘a big plus’ for the business life of Schull and the surrounding area, because research has shown that people were making day trips to Schull and then moving on to other areas.

‘Now that there is additional accommodation people can stay locally and holiday in the area – something that will benefit the entire region,’ said Paul, who is pleased to report that ‘the feedback has been fantastic and the support has been fantastic.’

A sign of its popularity can be seen in the fact that within three days of going up on Facebook, the Schull Harbour Hotel amassed over 1,000 ‘likes’.

People are also amazed by the size and the opulent setting of the function room, which can cater for 250-seated guests.

This is Paul’s ninth refurbishment and re-build, and his second in West Cork, having previously overseen the redevelopment and running of The Park Hotel in Glengarriff from 2006 to 2009.

His right hand man at the Schull Harbour Hotel is food and beverage manager, Pat Murnane, formerly of Willie Pa’s, who proudly reported that a lot of the 30 people now working at the hotel are locals.