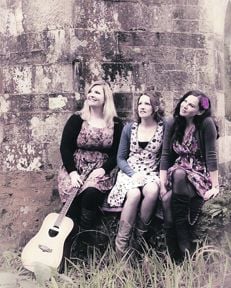 The members of West Cork harmony trio, Re Nua, are bearing no grudges to the country’s newest political party, led by Lucinda Creighton.

There were raised eyebrows around Clonakilty when Renua Ireland, headed up by Lucinda and Corkman Eddie Hobbs, was officially launched last Friday.

Singer Deirdre Archibold, along with Paula K O’Brien and Karen O’Regan, were more than surprised when their band name was suddenly ‘trending’ on social media.

‘It all got a bit crazy when they announced the name of the party and I was in college getting texts from Paula and other people that our name was suddenly trending. The Liveline show on RTE Radio 1 also contacted us and Paula spoke to Joe Duffy about the whole thing,’ said Deirdre.

‘We were shocked really that they didn’t just Google the name to see if there were other people using it. That’s what we did initially when we were coming up with a name for the band.’

However, Deirdre is wishing the party the best of luck, despite the shaky start the other Renua has had since the official launch. ‘People have been ripping them apart already, but I do think if they can make a go of it, then it’s great for Ireland. It’s also been great publicity for us too, as a band, and Paula has already tweeted The Saturday Night Show on RTE to try and get us on before Brendan O’Connor leaves at the end of the season.’

‘What’s great is that we have received new followers on Twitter and Facebook, so it’s good publicity for us as a band,’ said Paula.

Ré Nua have been playing together for a few years and while the three members pursue personal projects too, they get together for charity events and concerts. Last Christmas they released a single along with students from Lisheen National School in aid of the JustOne Charity run by Declan Murphy, who works with children in Nepal.