schull pupils with their tapestries at the Mexian embassy

Pupils and parents from Scoil Mhuire National School in Schull enjoyed a brilliant night of hospitality at a function in the Mexican Embassy in Dublin. 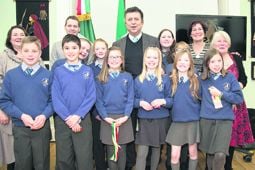 Pupils and their teachers with the Mexican ambassador at the Embassy in Dublin last week.

PUPILS and parents from Scoil Mhuire National School in Schull enjoyed a brilliant night of hospitality at a function in the Mexican Embassy in Dublin as honorary guests of Carlos Garcia De Alba, the Mexican Ambassador to Ireland, last week.

The event marked the beginning of a year-long series of events celebrating the 400th anniversary of the birth of William Lamport, a Wexford man who made a significant impression on the history of the Mexican nation.

Having been sent to Mexico or ‘New Spain’ by the Spanish king to investigate rumours of a rebellion by the indigenous Mexicans, he changed sides and wrote the first Declaration of Independence for Mexico.

His fascinating life inspired the pupils to depict the intriguing events of his life in a set of bold and imaginative fabric tapestries.

So beautifully and skilfully created were these tapestries, the school was asked permission to exhibit them at the Embassy to kick-start the year-long celebration of Lamport’s life and to mark 40 years of Mexican–Irish diplomatic relations.

The Mexican Ambassador thanked and praised everyone involved – the talented children of Scoil Mhuire NS, their enthusiastic and guiding teacher Maria Kennedy, talented local artist Maria Pizutti for her unique idea, school principal Diarmuid Duggan, and all the parents and pupils who travelled to Dublin to help celebrate this great event.